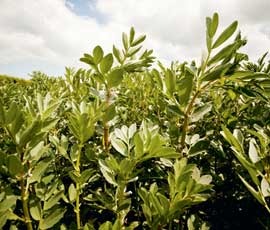 Latest results from the STAR long-term rotational project show that the rotation based on winter cropping is delivering the best margins.

But having spring break crops instead of winter ones comes a close second, reports Ron Stobart of NIAB TAG, who adds that the two rotations based on continuous wheat and alternate wheat/fallow are now giving very similar financial results.

“That was a surprise to me,” he admits. “And if you look at the figures in more detail, the cost of herbicide use in the continuous wheat rotation is now so high, that it brings the two approaches on to a similar footing.”

Grass weeds have become a serious issue in the continuous wheat plots, where non-inversion tillage treatments are being used, he reveals.

“The pressure has risen steadily and the main problem weed here is meadow brome, not blackgrass,” he says. “The only way of keeping it at manageable levels is by spending in excess of £100/ha on herbicides.”

The margins from the different cultivation systems are much closer to each other, continues Mr Stobart, with the managed approach (decision based on conditions at the time) coming out on top.

“That’s very reassuring,” he says. “It tells us that common sense has a role.”

Interestingly, the shallow tillage (top 5-10cm) regime is beginning to improve, having dipped in the first few years. “Shallow tillage enthusiasts tell us that the same thing has happened on their farms, so perhaps it’s an approach which rewards patience.”

Mr Stobart reveals that the margins from the plough-based system have fallen in the last couple of years. “That may be because we’ve had two consecutive dry years, which have suited the shallower systems better. Time will tell.”

The highest yields still come from the plough, he reports. “That hasn’t changed. There’s a drop of around 1% to the managed approach, then 2% to deep tillage and 4% to shallow tillage.”

Spring rain has helped the winter beans in this year’s project and they are now full of potential, says PGRO’s Paul Armitage.

Demand for beans is also rising, as this is the third year that there will be a shortage of the crop, he says. “You can get £220/t for November and there’s a premium of £20-50/t for export.”

Differences in establishment systems are showing at the site, he reports. “The worst establishment has come from ploughing down the beans. We don’t favour that technique any more, as the seed losses can be too high.”

The best plots are where they were ploughed and then drilled with a Claydon drill. “They look better than the min-till followed by Claydon drill approach.”

Bruchid beetle control is imminent in Suffolk, says his colleague Salvador Potter. “Nationally, some crops are ready to be sprayed, but at this site they need slightly better pod formation. They’re still seven to 10 days away.”

Two consecutive days of 20C or more are needed, together with first pod set, before spraying, he advises. “Bruchid beetle were very active in the recent warm spell, so growers must be prepared.”

“It’s a great brome herbicide,” he says. “But we were able to use it in March, which helped. If we’d been trying to control blackgrass as well, the timing would have been an issue.”

The blackgrass control problems being encountered on many farms this year could lead to a change in application advice for product such as Atlantis, he believes.

“There’s a blackgrass ‘sweet spot’, which is the one- to two-leaf stage,” he explains. “But the conditions at application do matter. Herbicides won’t work on dry, dusty surfaces, even if the blackgrass is at the right stage.

“So be prepared to wait for better conditions, if necessary.”

Non-inversion strategies aren’t an option with bad blackgrass, he insists. “Apart from the lack of weed seed burial, there’s the stewarding of existing herbicides to consider.”

What is the STAR project?

Funded by the Felix Thornley Cobbold Trust and delivered through NIAB TAG, the STAR project takes place at Stanaway Farm, Otley in Suffolk. Now in a seventh season, it is being carried out on a Beccles/Hamslope Series clay soil.