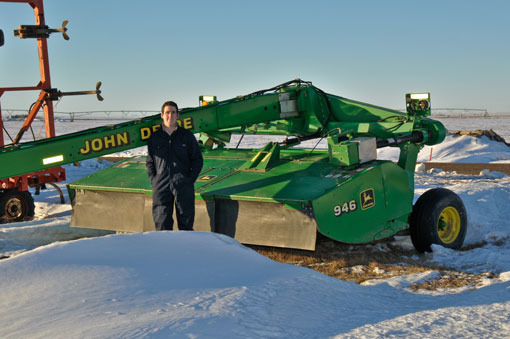 Up to about 24 hours ago, winter hadn’t properly arrived in Alberta. Similarly to the UK, we had been experiencing milder than usual winter temperatures. We even achieved +15C one day, as opposed to the average daily high of -6C.

However, there are a number of drawbacks to such peculiar weather. Firstly, the milder temperatures are more often than not accompanied by Chinook winds. From what I understand, as a weather system passes over the Rocky Mountains, it basically falls off the mountains and down on to the prairies, pushing a huge volume of air in front of it. This air then races across the farmland at wind speeds of 50-80mph for a distance as far as 200 miles from the mountains.

A Chinook can change temperatures from -20C to +5C in a matter of hours. I had to chuckle one day as the radio presenter announced that the wind was “dying down” to a “relatively calm” 55mph after three days of 70mph wind.

The second drawback is that I rely on the winter freeze/thaw to break down the clods I made last autumn, bulking up potato ridges for the upcoming season. If we don’t get sufficient “winter-tillage” I will be forced to use the power-hiller on all our potato hectares this year. I am shuddering at the thought of it. Our power-hiller was born in Holland, designed for use in the country’s abundant stone-free grade one silts and loams. When you bring a machine like that to Alberta where it might just happen to encounter the odd wheelbarrow-sized, glacially deposited rock, bad things happen. We didn’t use it much last season, but it still made several trips to intensive care in the workshop. It’s now sitting woefully where it was hurriedly unhitched and abandoned at the end of the hilling campaign.

Finally, now that the mercury has fallen to -23C, with a wind-chill factor of -39C, I find myself completely unprepared for the occasion. I wander around outside and feel surprised and almost offended when my nose freezes shut or when I realise that I have lost all feeling in my feet, knees, fingers and face.