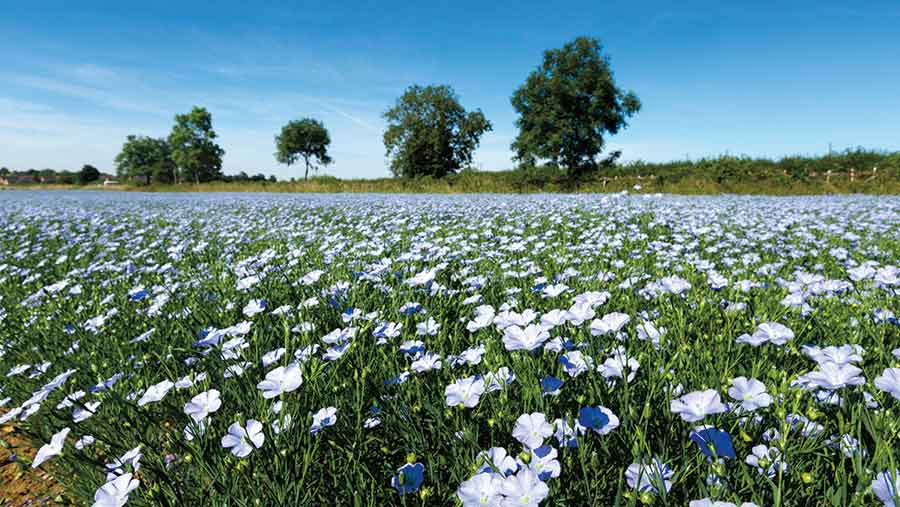 A resurgence in winter linseed is being seen in some areas of the UK as growers seek alternatives to oilseed rape, which is predicted to fall in area for the fifth consecutive year this autumn.

Nigel Padbury of Premium Crops believes there are three main drivers for the increase in winter linseed area – blackgrass, flea beetle and slugs.

“Much of the growth in the winter linseed area is coming at the expense of winter oilseed rape.”

That is certainly the case in key eastern counties, where some crops have been devastated by high flea beetle numbers and establishment failures, Mr Padbury reports.

“There is some confusion because flax stem flea beetle, which is active in the spring, can hit spring-sown linseed crops. But you don’t find it in the autumn, which is why winter linseed is unscathed.”

Slugs don’t care for it much either, he continues. “Any slug damage in winter linseed is minimal. They tend to have a nibble and then move on – meaning there are fewer slugs in following crops.”

Pigeons can take a liking to it in January and February, with the damage sometimes looking severe, he acknowledges. “But linseed has good powers of recovery and will produce more tillers where needed.”

As far as blackgrass control is concerned, there is more time to prepare stale seed-beds with linseed, as it is drilled a month later than oilseed rape

“Linseed is drilled right through September, so it is just about completed for this year,” he says.

“Although you wouldn’t be looking for an autumn-sown break crop in a high-blackgrass pressure situation, there is an extra three to four weeks with winter linseed if you need to remove a weed flush in a less severely infected field,” Mr Padbury says. 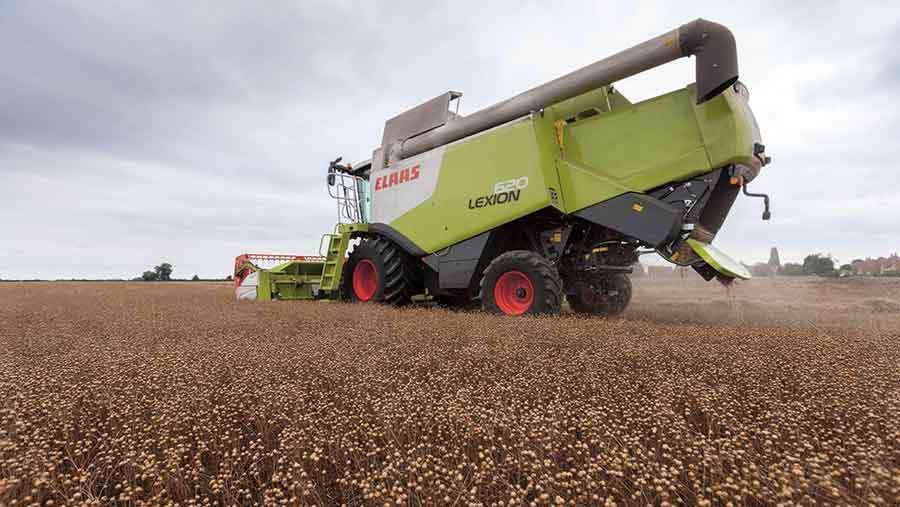 Yields of 3t/ha can be expected. “Like most crops, they’ve been very slightly down on that this year, at about 2.8t/ha.”

The fairly small market for linseed means winter linseed should be grown on contract, he advises.

“Speculative crops aren’t a good idea, as the total area remains below 10,000ha. There are some good buy-back contracts around and the terms are flexible, based on a price of between £300 and £350/t.”

Tailored agronomy advice is available from Premium Crops and the company has a dedicated linseed agronomist, Sam Deane. Bulletins are issued throughout the year and there are a number of Extension of Authorisation for Minor Uses (EAMUs) for agrochemical use on linseed.

Plant growth regulator (PGR) use is a key area, with recent mild winters causing crops to be very forward and more susceptible to lodging.

“Keep the crop small and close to the ground going into the new year,” recommends Mr Padbury. “The plants should be less than 10cm tall in January, so keep the top growth in check.”

Fortunately, Toprex has an EAMU for linseed, he says. “The right combination of PGR use, sowing date and later nitrogen use will keep it standing into the spring. Follow the advice for best results.” 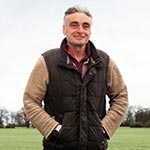 Peace of mind is just one of the reasons why Hertfordshire grower Tim Smith has switched from oilseed rape to winter linseed.

Fewer pest problems, lower growing costs and far less time and effort required are all behind his decision to grow the crop on a seed contract, with the latest varieties from Premium Crops proving to have benefits over their predecessors.

“We grew Alpaga last year, which didn’t grow taller than knee height and was easy to combine,” he recalls. “Of course, being able to use Toprex on the crop has made a huge difference – it controls disease and keeps it upright.”

To date, any pigeon damage has been minimal, although odd patches that came under attack last spring bounced back well, he confirms. “And not having to worry about flea beetle at the establishment stage is a relief. We are in a very bad area for it.”

Mr Smith, who farms first wheats and break crops at Henham, near Bishops Stortford, expects winter linseed yields of anywhere between 2-3t/ha and is drilling 61ha of Alpaga for harvest 2017.

“We’re in the process of getting it in the ground. Drilling too early is a mistake, as the crop can get too tall, but it has to be in time for it to survive the winter.”

He admits to getting more confident with the crop as time passes and points out that there is enough ammunition to deal with blackgrass. “We can use Avadex, Fusilade and Centurion Max in a programmed approach, if required.”

Harvest date is six weeks earlier than spring linseed, so is completed before he starts on his winter wheat. “Some combines have problems, but that’s often when Reglone has been used rather than glyphosate.”

Mr Smith is not surprised that the winter linseed area is increasing.

“Not having the pigeon, slug and flea beetle onslaught is a big benefit and helps to keep production costs down. It’s really quite an easy crop to grow and manage.” 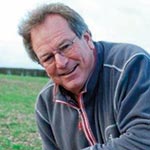 Independent agronomist and Association of Independent Agronomists member Joss Wood revisited winter linseed three years ago, when the availability of more attractive contracts meant the margins of the crop started to stack up against alternative break crops.

Since then, more of his clients in Wiltshire, Dorset and Somerset have started growing winter linseed and he will oversee an increased area drilled this autumn for harvest 2017 – all grown on contract for Premium Crops.

Having dabbled with winter linseed in the mid-1990s, with Oliver as the main variety, Mr Wood encountered a problem with winter kill – something that is no longer an issue with newer varieties, which can survive temperatures of -14C.

He has also worked with spring linseed, but admits the results have been variable and sometimes disappointing.

“The late harvest slot can also cause issues. In contrast, winter linseed has a harvest date of late July to early August, which is a big plus over the spring crop.”

His advice to those considering their break crop choices is to give winter linseed a go. “It’s a fairly easy crop to manage and you can get good grassweed control.”

Otherwise, he highlights the crop’s rooting ability, which brings soil structuring benefits. “I would consider using it in a double-break scenario, ahead of peas, to make the most of this ability.”

His final point is that winter linseed has a unique benefit over oilseed rape on farms with intensive game shoots.

“Having the headlands completely removed by partridge feeding – which is a huge frustration with winter oilseed rape – is not an issue with winter linseed.”

Replacing oilseed rape in the East

Cabbage stem flea beetle pressure is behind much of the recent interest in winter linseed in the pest hotspots in the eastern counties, says Jason Noy, area business manager with Farmacy.

“Disappointing oilseed rape yields are also a factor,” he says.

“As a result, growers are looking at the risk and reward of such crops, and an absence of flea beetle attack means they can be confident of getting a winter linseed crop established. The same can’t be said about oilseed rape.”

He believes winter linseed also has some other advantages over winter oilseed rape on the farms that he looks after in Hertfordshire, Cambridgeshire and Bedfordshire.

“There’s a reduction in slug numbers, so we’re using fewer slug pellets in wheats following linseed. We also have to do very little cultivating after linseed, as it does such a good job at structuring the soil.”

“Even if there isn’t time for a cultivation, they do have room for another glyphosate application.”

Having had three clients with winter linseed for harvest 2016, Mr Noy is seeing that number rise for 2017 and reports it’s well worth considering.

“With limited break crops and tight rotations, it can have a place – especially where you’re looking hard at oilseed rape.”