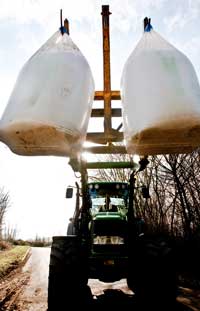 Global demand for fertiliser is likely to increase over the next four years, according to a report by the International Fertiliser Industry Association.

Fertilizer Outlook 2010-14 says that after relatively subdued demand for fertiliser last year – when consumption fell 7% to 156.7m tonnes due to volatile crop and fertiliser prices – demand is set to rebound in 2010 as commodity prices stabilise.

Most countries will see some increase, although Asia and the Americas are likely to drive a lot of the growth, it says. Because of its strong contraction in 2008/09, demand for potassium fertiliser is anticipated to rise at higher rates (+4.3% per annum) than demand for nitrogen (+1.8% p.a.) and phosphorus (+3.1% p.a.) fertilisers.

But farmers concerned that this rising demand may create upward price pressure can take some reassurance from the supply predictions in the report.

The IFA suggests that there could be a potential supply surplus for nitrogen and potassium fertilisers due to a faster increase in capacity compared to that of demand. That follows slower than anticipated capacity growth last year due to delays to planned projects.