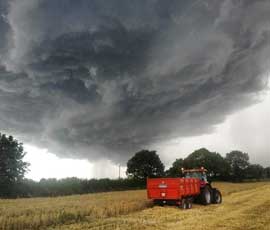 Ominous skies in some parts of the country didn’t stop the combines rolling.

These photos show farmers beating the weather to get their crops cut before the heavens opened.

There’s beauty too in the storm clouds, rainbows and sunsets.

Dont forget, you can upload your harvest 2013 photos to the Farmers Weekly Harvest Gallery for the chance to feature on Farmers Weekly magazine front cover.

See all the harvest progress and videos on our Harvest Highlights page where you can also submit your yields and harvesting progress.