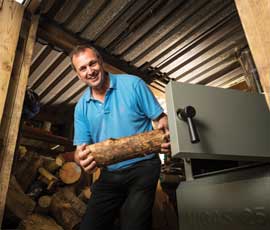 Steve Edmunds’ pioneering attitude, infectious enthusiasm and determination to show how renewable energy could keep farmers farming marked him out as a winner.

Managing a 200-head dairy herd in partnership with his brother, Steve had a moment of enlightenment six years ago when he realised the potential of renewable energy for the rural economy, particularly farming.

Since then he has been on a mission to maximise the opportunity for as many farmers as possible. With this ambition and the technical knowledge to understand how best to deploy the technology, he has become a pioneer of farm-scale renewable energy.

Steve describes himself as “the first of a new breed of energy farmers” that due to government incentives have a unique chance for a guaranteed income for 25 years and run two livelihoods off the same land.

Ninety kilowatts of ground-mounted solar PV on the farm replaces 50% of imported power for the 200-cow dairy unit, three farm dwellings and a neighbouring poultry unit. Through the Feed-in Tariffs (FiTs), the solar arrays earn the farm £41,500 a year with a return on investment of 16%. In addition, two 25kW biomass boilers replace heating oil for the two houses and save 60t of carbon a year.

While this all complements the turnover of the dairy farm, it was never all about the money. And it was Steve’s ability to translate technology from first principles to practical application that stood out.

This is where he started 25 years ago, when he led the development of market-leading homofermentative inoculants that improved the quality of millions of tonnes of silage each year. He then shifted his focus to the engineering of renewable energy technologies on farm, once again seeking alternative solutions.

With a system he built himself, he was the first person in the country to receive planning for ground-mounted solar PV. Counter to conventional wisdom, Steve believed that solar cells would operate more efficiently in cooler conditions on the ground.

His arrays produce 21% more power than their predicted output. The 90kW of solar PV on the farm is now a test-bed for panel efficiency and a demonstration site.

More than 2,500 people have visited the site in the past two years – mostly farmers, but also planners, bankers and insurers, so he’s played a role in actively influencing all those involved in the sector. Through those that he knows have installed solar PV off the back of his demonstration, he estimates nearly £1.6m is now coming back into the rural economy through the FiTs alone.

As if that wasn’t enough, he is now exploring a low-cost anaerobic digestion system, in partnership with Warwick University, which he hopes will have widespread applications and benefit many farmers.

Steve can best be summed up by the recycled solar panel that he has placed on top of his inverter housing to power an old electric car fan to cool the inverters and keep them operating efficiently – innovative, practical and effective.

“Steve is a great ambassador for innovative and practical renewable energy solutions. He is keen to open his doors to visitors, and his mind to new ideas”
Andrew Kneeshaw, Farm Energy Centre

“The quality and quantity of entries in this year’s Green Energy Award are impressive. This is another reminder that renewable energy production and agriculture are perfect partners”
Hugh Mowat, agronomist

Gareth’s pursuit of a sustainable farm business runs through all areas, from energy reduction to carbon benchmarking and graduate placements on his 236ha mixed farm.

Tim’s commitment to growing his own energy on his 237ha arable and retail business includes solar PV, biomass boilers and 80ha of miscanthus. He’s a man who is always thinking ahead.

Keep up to date with all the news from the 2012 Farmers Weekly Awards.