Farmworkers are the backbone of many businesses, ably turning their hand to the many different jobs required throughout the agricultural calendar.

Their skills and perseverance ensure high standards of animal welfare, crop yields being protected as jobs are done at the right time, and problems being averted before they materialise.

Each of the finalists for this year’s Farmers Weekly Farmworker of the Year award exemplify these characteristics, allowing their businesses to improve profitability and implement change.

We salute their dedication to operating at the highest standard and celebrate the high regard in which their employers clearly hold them.

The 2018 Farmworker of the Year finalists 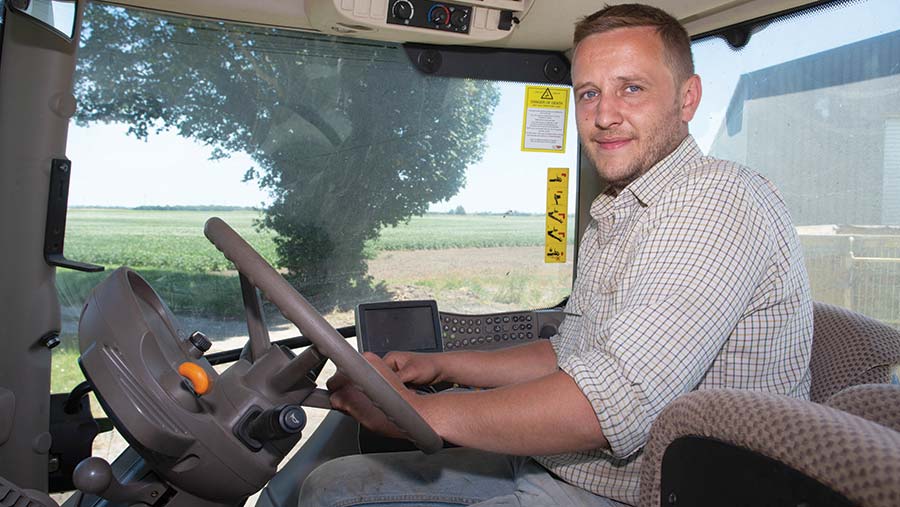 The past few years have been transformative for Neill Craig. He arrived in Britain from Northern Ireland 13 years ago as an apprentice farmworker. Since then, he has risen through the ranks to become a stalwart of the farm team working on the 5,460ha Waldersey Farms across Norfolk and Cambridgeshire.

“Neill is the sort of person you can rely on for any job, cope with any pressure and deal with any problem – he’s extremely capable,” says farm manager Adrian Kew.

Neill has a “work hard, then work hard some more” mentality. Regularly pulling 12-hour-plus shifts, he is responsible for drilling 2,430ha of winter cereals, 405ha of spring cereals as well as planting 324ha of potatoes and ploughing a further 280ha.

Not content with this workload alone, in which he often clocks up 80ha of drilling a day, Neill recently got his HGV licence, so when he’s not planting potatoes, he is hauling them around the UK.

A self-confessed workaholic, he admits he has never been one to sit at home and twiddle his fingers and is always looking for other jobs that need doing.

The thought of a job unfinished is the catalyst for a sleepless night for Neill, who recently worked past dark to seed the twentieth acre of a field. He confesses: “I wouldn’t dream of leaving it on nineteen.”

His dedication reached its apex when Neill missed his cousin’s wedding because it coincided with harvest. He also insists Farmers Weekly should shift the date of the awards night as it conflicts with when he wants to start drilling.

Neill is a petrolhead to his core and his eyes light up at the very mention of his pride, joy and somewhat of a second child, the 370hp John Deere 8370RT he operates.

One of the first of its kind to arrive in the UK, Neill knew exactly how it worked before it was delivered, although he admits he prefers giving the machines a go first before consulting the manual for advice.

Neill also recommends new kit to the farm’s management, recently culminating in a 25% saving on diesel when, under his guidance, the farm invested in a new 9m drill to replace the old 6m one.

While many UK farms are suffering from a recruitment crisis, Waldersey Farms are often oversubscribed with applicants, partly down to Neill’s adept use of social media marketing.

Using the Instagram handle @neillcraig, the farmworker records his working life as well as showing off the farm’s extremely popular fleet of big kit which includes the monstrous, four-track, 620hp, John Deere 9620RX.

The page has almost 6,000 followers and is an effective marketing tool for the farm, as well as a forum for like-minded farmers and farmworkers to discuss the latest kit, techniques and technologies.

With a fixation on driving efficiencies, Neill is always looking for new ways to save time and effort for the farm’s 10-person team through a common-sense approach to each task and not simply doing the job as it has always been done.

He is also ambitious and has aspirations to continue to progress through the business and to one day succeed Adrian as foreman on the farm.

“It’s something I definitely want to do in the future,” he said. “Although I might struggle sitting in an office as I love being in my cab too much.”

“Neill is a dedicated worker who loves what he does. He’s driven by new machines and technology; he’s young and enthusiastic and is highly respected by his managers and team.” 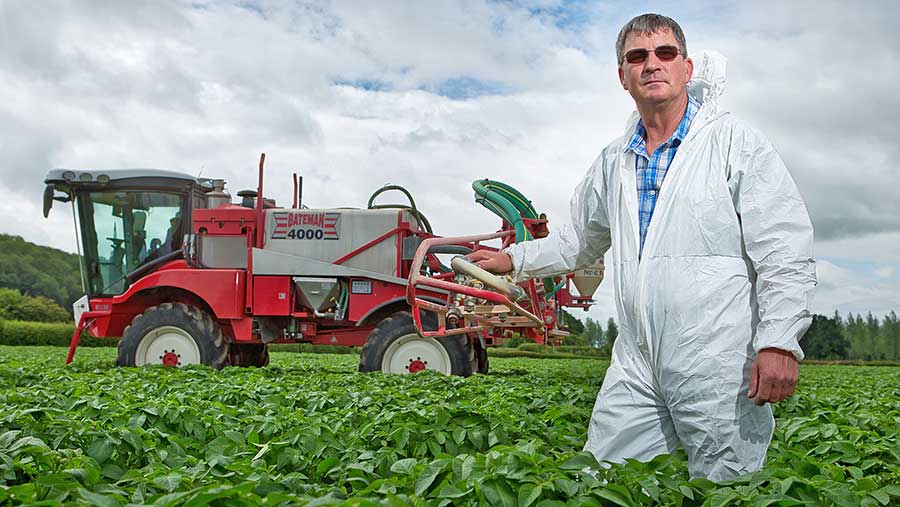 Richard Fox, or “Foxy” to his teammates, is the quintessential farmworker – he can put his hand to any farm job across his 526ha mixed arable and livestock unit.

He is also the man who – day or night – any of the farm’s five other permanent employees call for assistance. He has the complete trust of the farm’s owners and they leave him in charge when they are away.

“Richard is the sort of farmworker you have to look after and hold on to,” says farm owner Bill Smith.

Over the past 17 years, Richard has become ingrained in the fabric of Park Farm in Herefordshire – taking personal pride in the performance and standards of the business and those he works with.

Overseeing the production of more than 200ha of potatoes, the farmworker has become the linchpin of the operation, ensuring delivery of the highest-quality product – 80% of which goes to frozen potato manufacturer McCain Foods.

Richard admits he has very high standards and takes it personally if his crop is afflicted by blight or disease. This drive for quality contributed to the farm being crowned the McCain Southern Region Champion Grower in 2016.

He regularly benchmarks the business’ performance against previous years. In 2017 the farm achieved production bonuses for well-graded potatoes without blemishes from McCain for 80% of their deliveries and Richard is ardent the team will outdo that figure this year.

The farm’s storage sheds are transformed by Richard and his team to create a potato-box-chic ball room which the farmworker says gives back to the community and builds better links for the farm.

Richard’s unassuming air betrays his forensic knowledge of each sector of the farm business, whether it be working with machinery, in potato production and processing or with the farm’s 150 Simmental cows and 30 Simmental heifers.

The farmworker is indispensable when the right kind of help is needed, according to Park Farm’s vet, Rowena Craig, who adds that Richard recently highlighted his skills during a C-section on a first-calving heifer.

“It was late at night after a long day on call and Richard happily scrubbed up and helped me with what was an extremely difficult job – the calf was big and it’s presentation did not make the job an easy one,” says Ms Craig.

“Richard is always a willing and most capable assistant. He has a real affinity with the cattle, remains calm but is strong yet gentle, and at all times remains cheerful and positive,” she adds.

During his three decades in farming, Richard has navigated the introduction of new types of machinery and technologies, embracing the changes to remain one of the farm’s primary sprayers and a key proponent in its fight against blight.

Richard, described by almost everyone we meet as part of the furniture at Park Farm, sees his long-term future with the business.

He sees his eventual role as facilitating the transition between current farm owners Bill and Nicky and their son Jack, who will one day inherit the business.

“I have a great working relationship with Jack. I hope we can work together and I can teach him some of the old while he brings plenty of new ideas to drive the business forwards in the future,” says Richard.

“Richard is a loyal and respected member of the team who is at the core of this successful business. He is held in high esteem and whose opinion is valued by both the team and his employers.” 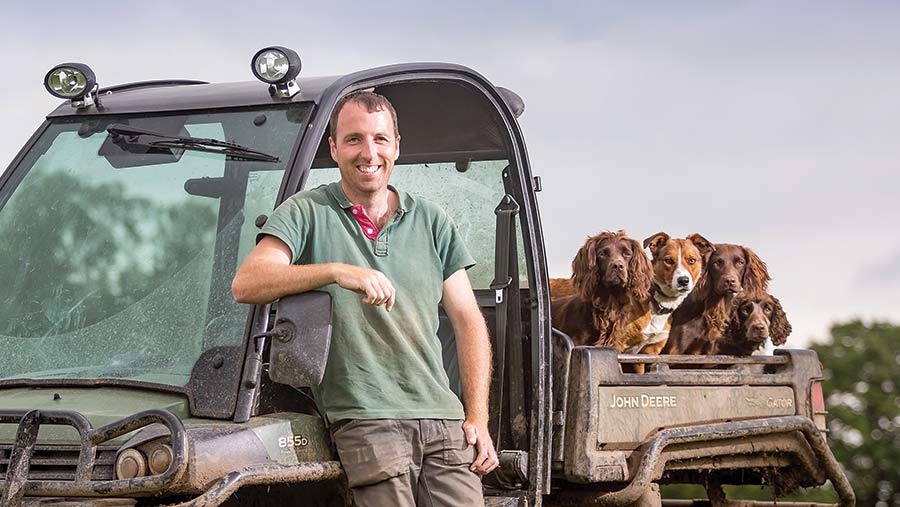 Dylan Williams was presented with the difficult challenge of revitalising and modernising High Ash Farm in Herefordshire after problems with husbandry and building maintenance caused by a staff issue.

But the task has not daunted this farmworker, originally from North Wales, who has implemented an intensive programme of ambitious changes to his farm and has a plethora of more improvements on the horizon.

“Dylan really came here out of the blue,” says farm owner Ms Lockhart. She adds: “Since his arrival it’s like the clouds have lifted – he’s meticulous, hardworking and very talented – which is important because my standards are extremely high.”

Dylan’s top priority has been to bring a greater element of commercialisation to the 121ha farm business while maintaining the bucolic rural setting that is home to the farm owners, as well as several tenants of rental properties on the land.

But the unflappable 32-year-old takes all of this responsibility in his stride, meticulously planning how to implement his programme of reforms late into the night.

In the next two years, Dylan plans to overhaul the farm business, increasing the cattle herd of pedigree South Devons from 23 to 30 animals and increasing his flock of 620 Lleyn and Mule-crosses to 750.

To facilitate these changes, he plans a modernisation of several existing farm buildings, including the lambing, shed to maximise efficient use of space. He also wants to erect a purpose-built barn to drive his lambing rate to the 185-195% level.

The farmworker has also had to repair and reweld several pieces of machinery that had been left to deteriorate, but admits he would rather take something apart and fix it himself before taking it elsewhere.

When Dylan arrived at the farm in June, nearly 12% of his flock were lame and none of them were EID tagged. However, a month after his arrival all sheep had been tagged and a rigorous system of selective breeding introduced to improve herd genetics and, consequently, profitability.

In order to take a proactive approach to increasing his lambing rate and reduce future lameness, Dylan – through the guidance of his vet – has become adept at performing post-mortems on his flock. He says identifying problems at the source will stop disease and illness outbreaks from escalating, improving welfare and profitability.

Future plans include a reintroduction of rotational grazing to the farm, which is registered as organic, to maximise grass use as the worldwide shortage of organic feed has sent costs sky-high.

Dylan also wants to maximise the returns from his animals by establishing a meat box delivery business as well as direct selling beef and lamb to nearby restaurants. He already has a preliminary agreement in the bag.

He plans on buying in organic-certified chicken muck from a neighbouring chicken farm. It is GMO-free and at just £8/t, will help to keep his costs down.

For now, Dylan is thriving on the challenge of an almost blank canvas and says he enjoys the opportunity to tackle difficult problems and put his own spin on the farm business.

“Delighted to see a farmworker with such enthusiasm taking responsibility and providing new ideas to take the farm forward through a methodically planned approach.”

Safety Revolution is delighted to be sponsoring the Farmworker of the Year award.

This year’s candidates are genuinely exceptional people who show dedication and commitment to their work on farm.

It’s these people who continue to inspire others with their positivity, reliability and versatility.

These technicians are always looking for ways to improve and to move business forward while understanding the importance of influencing the health and safety culture of their working environments.

We applaud the initiative and drive they have shown in sharing their experiences and good practice through these awards.