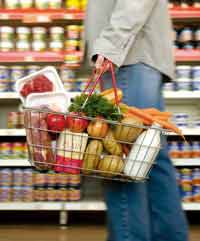 The government has been urged to act immediately and follow the Competition Commission’s recommendations to establish a supermarket ombudsman.

Welcoming the announcement of a strengthened retailer Code of Practice on Tuesday (4 August), the NFU said the Commission’s formal recommendations for the government to introduce a retailer watchdog needed to be acted upon without delay.

“This is an important day for suppliers, including farmers, and I’m absolutely delighted at the news,” said NFU president Peter Kendall.

“There is now no logical reason for the government not to act in full on the Commission’s findings.”

Mr Kendall said the strengthened code would only work if it was “robustly enforced” so suppliers did not fear making complaints about underhand behaviour by retailers.

“This can only be achieved through the implementation of an ombudsman,” he said.

“Government has said it will act in the best interests of consumers and it seems clear that the establishment of an ombudsman will give suppliers the confidence to invest and to innovate which will, in turn, improve consumer choice, produce better products, and ensure food remains affordable.”

A great deal of time had passed since the Commission’s investigation into grocery supply chains had concluded an ombudsman was necessary, so it was vital the government acted “sooner rather than later”, he added.

Friends of the Earth agreed the government must stand up to retailers and implement an ombudsman.

“At a time when many farmers and small businesses are struggling to survive, the big supermarkets continue to post record profits,” Helen Rimmer, FoE food campaigner, said.

“The Government must stand up to the big retailers and set up an independent watchdog to put an end to the supermarkets’ bullying behaviour and secure afairer deal for shoppers and farmers alike.”

However, the British Retail Consortium claimed an ombudsman would be “expensive and unnecessary” and urged the government to reject the proposals.

“The last thing needed at any time, let alone in a recession, is a multi-million pound bureaucracy – unnecessarily piling on costs and pushing up shop prices,” said Andrew Opie, BRC food director.

“Most supermarket suppliers are multi-national food businesses perfectly able to stand up for themselves. Retailers are right to defend customers’ interests by negotiating robustly with them. Very few farmers deal directly with supermarkets.

“We have seen no evidence to support claims that retailers are unfairly putting the squeeze on their suppliers.”