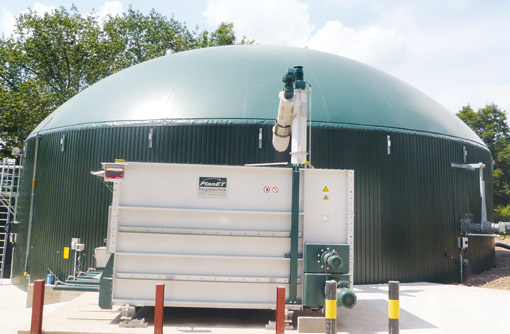 A desire to improve her environmental footprint, coupled with an opportunity to boost income, were the drivers that persuaded Sue Shakesheff to install an anaerobic digester at Great Ynys Farm in Herefordshire.

“We were keen to set it up as it’s a sustainable way of farming,” she says. “It fits in well with the resources we have as we feed the digester with maize silage and chicken litter, both of which are from our farm.”

The mixed farm has a 90,000-bird unit, grown on contract for Faccenda. The AD plant – a German-built PlanET Biogastechnik with a 250kW capacity MAN engine – was installed two years ago, fermenting some 700t of chicken manure and 4,000t of home-grown maize silage a year.

“We used to use the chicken litter as a fertiliser, so methane would have been released into the environment when it was spread,” she says. “Using the digester means that doesn’t happen; the digester recycles the litter and maize silage so you end up with a good quality and odourless fertiliser. All of that’s in addition to the electricity of course.”

Mrs Shakesheff’s electricity generating company trades under the name of Ynergy and currently produces around 2,000,000kWhs a year. About 10% of this is used to power the poultry houses and AD system, with the remaining 90% sold to Opus Energy under a power purchase agreement.

As well as a “competitive” price for the electricity, the business gets a Feed-in-Tariff worth 14.7p/kWh.

“The AD plant at Ynergy is close to the farm buildings, so when it was set up we were able to transfer the farm’s three energy supplies into one, saving the company money on standing charges,” explains Opus Energy’s head of renewable operations Andy Dayus. “We managed the relationship between Ynergy and the various industry parties, such as the National Grid, to ensure that everyone was kept up-to-date throughout the process.”

Opus Energy’s renewables team liaise with Ynergy on a monthly basis and sends their energy payments.

Meanwhile, excess heat is produced by the combined heat and power plant. Ynergy plans to harness this using Big Dutchman Heat Master convection heaters to warm the poultry sheds during the rearing period, replacing oil and gas on the farm.

Currently, the unit does not qualify for a Renewable Heat Incentive payment, as the power plant exceeds the 200kW eligibility threshold. The results of a government consultation are expected this summer, and this will determine the rates of RHI payment for larger units, and whether existing units qualify.

Mrs Shakesheff says she is proud to be at the forefront of the AD movement. “We’ve only been operating for 18 months and the plant is running very well. The harvest was poor last year due to the very wet weather and we, like many other AD plant operators, have seen increased cost and lower quality of feedstocks.

“This makes getting the biology of the plant correct, all the more important. It is a popular myth that you can put any old feedstock into plants. In reality, the better the feedstock, the better the methane production.

“We use PlanET’s biological services so we send samples of fermentate for lab analysis every two weeks and they send us the results and advise on how to adjust the balance of nutrients to maximise methane production. This enables us to keep a good stable biology.”

Ynergy is also about to fit a PlanET “gorator” to the plant. This conditions the substrate using micro-crushing technology, effectively increasing the surface area for the microbes to work on. “This will decrease feedstock requirements by 10-15%, which will be of great value in years such as the last one when yields were down.”

Mrs Shakesheff advises would-be investors in AD to match the size of the plant to the availability of feedstocks. “If you plan right, the plant can be designed and built for easy expansion in the future. It is good to err on the cautious side to begin with and then expand later once established.”