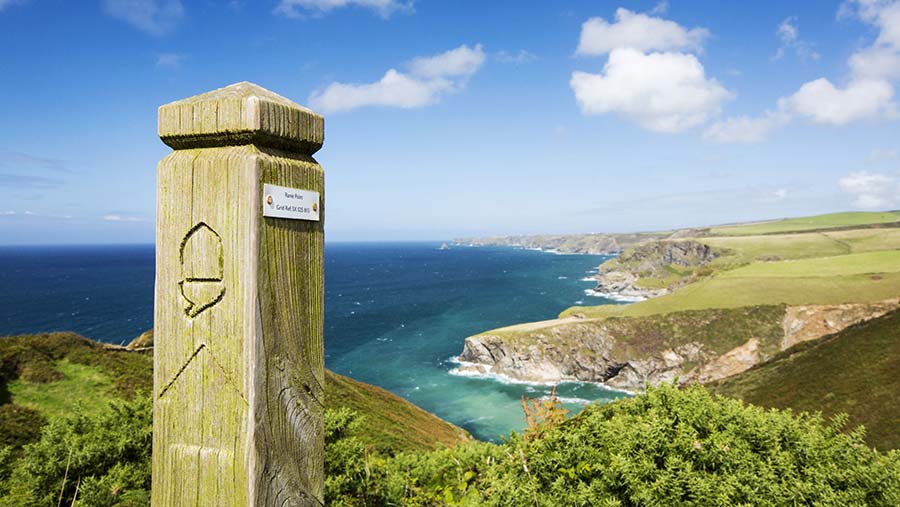 Created by the Marine and Coastal Access Act 2009, the England Coast Path (ECP) will be the world’s longest coastal walking route.

The path itself may be up to four metres wide and will also offer a coastal margin or “spreading area” for the public. This usually extends seawards, allowing unfettered access to cliffs, dunes, mudflats, salt marsh, beaches and the sea.

Natural England (NE) has eight teams working around the country. Among recent new sections are an 82km stretch off the Lancashire coast from Silverdale to Cleveleys, the 57km stretch between Highcliffe and Calshot, Hampshire, and a similar length between Iwade and Grain, in Kent.

Since March, a stretch along the Somerset coast has also been opened, while more sections in Kent and a route from North Yorkshire to Middlesbrough will be opened this summer.

How is the path created?

Landowners are urged to talk to NE at the earliest opportunity as it continues to roll out more of the path.

Five stages of work are undertaken by NE to create stretches of the path:

So far, there has been no formal legal challenge to the route of the path, due in part to the expense of such action. But there have been objections, some of which have been upheld by the secretary of state – for example, where the proposed path is too close to a residential property.

Sarah Slade, CLA national access adviser, says she is pleased that NE is taking its engagement role seriously. “There is now much more consultation at an early stage than when the pilot stretch started, and NE is making use of existing coastal paths where possible.”

The British Association for Shooting and Conservation (BASC) was instrumental in persuading Defra to place a duty on NE to take account of sporting rights on the coast, and also secured a right of appeal to the environment secretary to change the route for sporting purposes.

Glyn Evans, BASC’s head of game and deer management, says NE has taken a pragmatic approach: “Obviously, we are still at a fairly early stage and there is a long way to go. But we have been encouraged by the way we are consulted early about their latest plans.”

Hover on the icons to see the routes. The squares are places. The circles are routs.

People who occupy land covered by the coastal access rights benefit from a low level of occupier liability, says NE. Essentially, occupiers are not responsible for any damage or injury caused by any physical features of the land, whether natural or man-made. However, when the ECP follows existing rights of way, existing rights and responsibilities apply.

The CLA says that liability is a complicated area but that it is lower on coastal access land than in a situation where the public has been invited on to farmland. However, liability is not excluded if a landowner does something reckless or deliberate that would endanger someone.

Land managers are advised to carry out a risk assessment if they plan to have livestock close to the path, and should be familiar with the Health and Safety Executive’s Cattle and Public Access England and Wales leaflet (revised): www.hse.gov.uk/pubns/ais17ew.pdf.

Legal occupiers, such as tenants, are treated in the same way as land managers, says NE. George Dunn, Tenant Farmers Association chief executive, says he has encountered only a few concerns relating to the path, which have been resolved following discussions between the landlord and the tenant.

“These concerns have largely been from individuals on short-term business tenancies and where landlords are seeking to make changes to renewal agreements to accommodate matters relating to the coastal path and their negotiations with NE,” he says.

An important part of the coastal path legislation is that it allows the route to “roll back” in future if the coastline erodes or slips. This applies even when existing routes, such as the South West Coast Path, are adopted.

The CLA says landowners need to be aware that the path can roll back indefinitely. “As a result, it’s not just coastal landowners but others inland that need to discuss this issue with NE now,” says Mrs Slade.

Implementation of the ECP does not impose maintenance obligations on farmers or other land managers. But where the ECP follows existing rights of way, such as footpaths or bridleways, the current rights and responsibilities remain – for example, the landowner should keep side vegetation cut back in the summer.

In these instances, an owner or occupier may seek a restriction. Examples include exclusion of dogs from a small enclosure in the coastal margin for a period when cows and calves are present, or an alternative route being put in place to allow a boat-lifting to take place.

“We follow the principle of applying the least-restrictive option that meets the need and strikes an appropriate balance between public access rights and interests of landowners,” NE says.

However, landowners cannot restrict public access to manage risks to public safety from natural features, such as cliffs and potholes. NE emphasises that visitors should take responsibilities to keep themselves safe.

Eventually the coastal path will be designated a National Trail, which will mean that maintenance becomes the responsibility of a local trail partnership, which normally includes local authorities, Areas of Outstanding Natural Beauty, landowners and user groups.

Some people are concerned that NE will not meet its 2020 deadline to complete the path and may try to cut corners when it comes to consulting over some of the more difficult areas of the coastline.

When the legislation was going through the House of Commons, the cost of the path was estimated at £50m. Neil Constable, NE’s principal adviser for coastal access, says it will cost considerably less. He adds that, while it has started slowly, the government is committed to completing what will be the world’s longest coastal walking route by 2020.

“We have opened or are now working on 60% of the coast, which will bring a boost to local tourism and grow the rural economy. We have built momentum to continue this across the country and are on target to complete the entire route by 2020.”

Mrs Slade believes this target is just about possible, but only if ongoing engagement with landowners and good co-operation with stakeholders is maintained over the next four years.

“It is a very tight deadline and is only achievable with good co-operation.”

The CLA had always maintained that the approach in Wales was more straightforward and took less time, with a simple path being designated and no roll-back provision, she said.