British agriculture must not become the “sacrificial lamb” during trade negotiations on Brexit, the deputy president of the NFU has warned.

Concern is growing among farmers that the UK government may seek to sacrifice agriculture to strike free trade deals with countries including the US and Australia.

During a debate on “What next for food and farming after Brexit?” at a Lib Dem conference fringe meeting in Bournemouth, industry leaders argued this must not be allowed to happen.

Minette Batters, NFU deputy president, said: “It’s really important that our standards on Red Tractor are recognised in the supply chain, that they are not compromised and that agriculture, potentially the most impacted sector on Brexit, is not the sacrificial lamb.”

Ms Batters explained this is why the NFU is arguing strongly for a transitional arrangement after Brexit that would see the UK and EU continue to trade within a customs union. 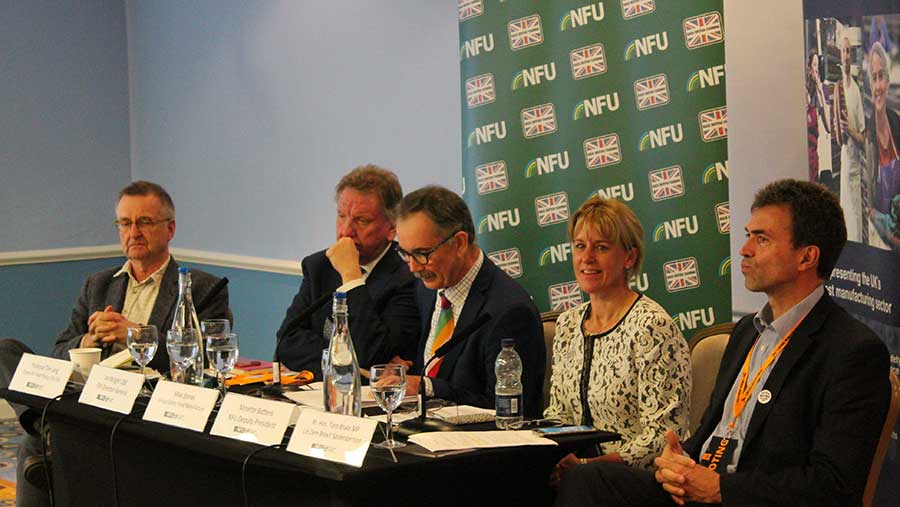 “We must ultimately achieve that free trade deal with Europe. It’s in the consumers’ interests. It’s in our interests,” she told delegates.

“We are proud of our high standards as farmers, of welfare and environmental protection, and we want to maintain that.”

Industry leaders warned against “shotgun deals” with countries such as the US that might open the back door to controversial practices such as hormone promotion and chlorine-washed chicken.

Tom Brake, Lib Dem Brexit spokesperson and MP for Carshalton and Wallington, said: “Although I think chlorinated chicken is probably safe, I still think British consumers will have some very strong reservations about eating it.”

Ian Wright, director general of the Food and Drink Federation (FDF), said: “If anything, consumers will want standards to improve. In fairness to Michael Gove, he has said he is not prepared to compromise on this subject.

“But there is a tension between Liam Fox and Boris Johnson over immediate trade deals with countries like the US and the responsibility on maintaining high welfare standards for the shopper. I don’t see that being sorted out very soon.”

Ms Batters said achieving the right trade deal with the EU and other countries was crucial because this, more than anything, would shape the UK farming landscape for years to come. She urged families and communities to “make the case for farming” with the government, insisting “food matters”.

Tim Lang, professor of Food Policy at City University London’s Centre for Food Policy, called on the government to introduce a national food policy. He said Brexit will be a “battle of standards, culture and the identity of Britain”.

He also warned against the UK reverting to “the cesspit of WTO [World Trade Organization] rules” with 164 other countries.

“It is poisonous. It is not a race to the bottom, but it is pretty close,” said Prof Lang.

“We will not like it when trade and tariff deals and contracts and specifications are done to GATT [General Agreement on Tariffs and Trade] basis, because Britain will be on its own.”