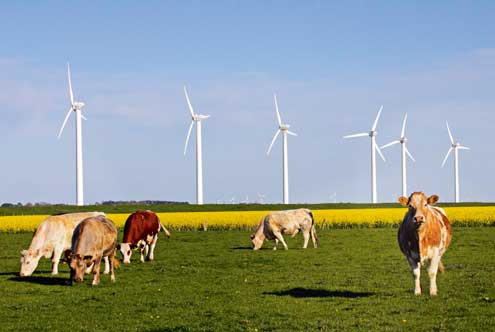 Mr Miller, who likened the drive for renewable energy to the American gold rush, said renewables schemes such as the Renewable Heat Incentive (RHI) offered farmers an “extraordinary opportunity” to develop a diversified income stream.

He admitted that planning and grid connection difficulties would restrict further development of the wind sector, but alternatives such as hydro, solar, biomass and anaerobic digestion remained largely untapped by farmers.

An £111m slump in farm incomes last year and a 10% increase in costs highlighted the need for farmers to develop other sources of income.

“Renewable energy offers opportunities for Scotland’s farmers at a time when farm incomes from their core business of producing food are falling and businesses are under significant pressure from changing weather patterns and escalating costs,” said Mr Miller.

“The right investment in renewables at farm level – or larger collaborative projects – presents a route to an income stream where the likely investment and potential returns are now well established. The RHI offers a huge incentive to get involved and is set to ignite the sector.”

Despite a reduction in the Feed-in Tariff, investment in solar panels still looked attractive and more than 7,000 sites – including 1,000 in Aberdeenshire alone – had been identified as suitable for hydro schemes.

Many farms also had areas of woodland that could be harvested for biomass, and anaerobic digestion was totally unexploited in the UK compared with Germany, where there were more than 6,000 AD plants on farms, said Mr Miller.

Aberdeenshire Council’s head of planning, Robert Gray, refuted suggestions that the socio-economic benefits of wind energy should be given a higher weighting by planners. This would amount to “cheque-book” planning and was not the way forward.

He said more than 50% of planning applications for wind turbines in the region were being approved, although cumulative effect was becoming a problem.

“We have processed about 1,000 applications for planning over the past five years and only 100 of the 500 approved have been built,” he said.

“This means 400 developments that received approval are not on the landscape yet.”

Scottish Natural Heritage has been called in to identify sites where wind turbines could still be accommodated without blighting the landscape or damaging wildlife.

Meanwhile, NFU Scotland has recently entered into a partnership with the UKFM Group for the provision and installation of renewable technology and energy efficient products for the union’s 7,000 members. The union is also launching a renewable energy initiative with the Scottish Government which is due to be announced in the summer.

Farmers considering a wind energy development on their farms should invest in the project themselves rather than “giving away” the profits to international developers, said Aberdeenshire farmer Maitland Mackie, chairman of ice-cream manufacturers Mackies of Scotland.

On-shore wind energy was generating £2bn of income in Scotland, but 75% of the profits were going to six multinational companies, he said.

“These companies are siphoning off £1.5bn which could be staying in Scotland if we had the courage to invest in our own renewables industry,” said Mr Mackie.

On-shore wind energy was by far the cheapest source of renewable energy, he maintained, and the possibility of producing hydrogen from water by electrolysis was an exciting prospect. This could lead in the longer term to the conversion of hydrogen into ammonia, which was highly significant in a world where half of the food produced depended on ammonium nitrate.

Scottish Enterprise has launched an £80,000 study to look at the mechanics and economics of producing and storing hydrogen and Aberdeen is set to become one of the first cities in the UK to introduce hydrogen-fuelled buses.

Arable and pig farmer Andrew Rennie, Gask, Turriff, said a £2m investment in an anaerobic digester six years ago had enabled him to reduce fertiliser costs significantly for his 283ha of cereals and oilseed rape and had generated additional income.

He had created a “renewable circle” by using slurry from his pig unit and waste from a local abattoir as feedstock for the digester, which produced heat and energy and left a by-product that was useful as a fertiliser to grow the grain to feed to his pigs.

“The amount of artificial fertiliser we use each year depends on the analysis of the digestate,” he said. “We only have to give our crops a light dressing of fertiliser to give them a good start.”

Investment in a biomass boiler at Balring, Mintlaw, had helped farmer, Hamish Watson, to reduce his grain drying costs and pay off the capital cost in a year.

Mr Watson, who was the first farmer in the UK to qualify for the RHI, said this level of return had encouraged him to invest in a second boiler to provide heat for three houses and a workshop.

He has now set up a company with a friend to install a 150kW woodchip gasifier that would be the first in the UK.

The gasifier will produce syngas to drive a spark ignition engine to generate electricity.

The heat produced will be used to dry woodchips to the moisture level required by the gasifier.

This technology is widely used in India to provide power to rural communities in the absence of a national grid.