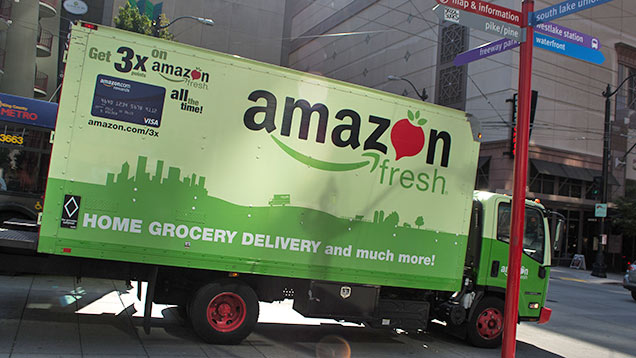 Amazon Fresh has launched in the US. Photo by Visitor7/CC BY-SA 3.0

Amazon is taking on the UK’s retailers with the launch of an online fresh food service delivered to customers’ doors within one hour.

The online retail giant has soft launched its Amazon Fresh online food delivery service in Birmingham and will extend it to London later this month ahead of a full rollout to other parts of the UK in early 2016.

The launch sees Amazon pit itself against other online food delivery services, such as Ocado, as well as Tesco, Sainsbury’s and Morrisons.

Tom Lander, adviser at the NFU, said Amazon was just “dipping its toe in” at this stage, but that it would add extra competition into the grocery sector.

“However, delivering a large array of fresh goods such as meat and veg proposes much more logistic challenges and investment in infrastructure.

“It is a potential new market [for British farm produce] in theory but there is a lack of detail from Amazon about its long-term plans.

“From the initial look of things, it is primarily focused on well-established, branded food products, sold at a cheap price.

“We have seen how mainstream retailers have responded to consumer demand for locally produced food products and this will be the same with what they will expect from Amazon.

“So an Amazon-branded selection of food products, which are ethically sourced at a competitive price, could be an interesting proposal.

“It is however early days and too hard to tell whether it will be successful or not.”

Amazon Fresh is already up and running across a number of US cities, including New York, Los Angeles, Seattle and San Francisco.

It is expected to shake-up online food shopping and could take some of the market share off the UK’s major UK supermarkets, which are already battling against the rapid rise of discounters Aldi and Lidl.

Critics fear the service may also take a chunk out of the profits of farmers’ markets and online organic food stores.

However, Amazon Fresh could also offer new markets for farmers to sell their local, fresh produce.

“Amazon has been very tight-lipped about this new service,” said Fraser McKevitt, head of retail and consumer insight at Kantar Worldpanel UK.

“I would not like to bet against them, but they have got a number of real challenges to make this work in the UK.

“People are very loyal to their brands and major retailers. They are relatively reluctant to change online grocer when they have their ‘favourites’ list and payments details set up.”

Mr McKevitt pointed out that Amazon might also have to develop its own-brand label, such as Tesco and Sainsbury’s, if it wanted to become a serious contender in online food shopping.

“In the US, food shopping is very much about brands, but in the UK about 50% of what is bought is own-label,” he said.

“How does Amazon fulfill that non-branded part of the basket? It may have to partner up with other companies to provide the staples on things such as meat, bread and vegetables.

“Or, it will have to develop its own brand, which can take years of marketing. If it doesn’t fulfil this side of the basket, the service will have limited appeal.”

But he added: “I don’t think it will have an effect on farmers’ markets. They are still a niche activity for the population. People go to them to speak to traders and connect with producers.

“If Amazon can crack the fact that I can sit at my desk at lunchtime, order my food and have it delivered in time for dinner, it could grow the online food shopping market substantially.”