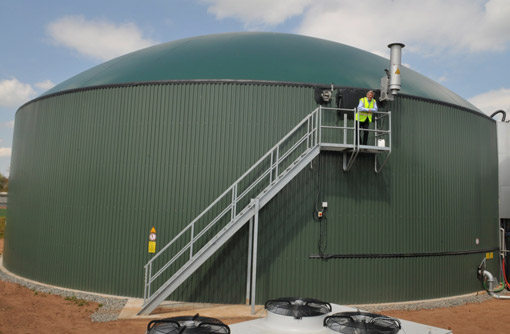 “Anyone going into this has to address the availability of capital and also whether there is a grid connection,” said Mr Harwood.

There was also the requirement for environmental consents, and in some cases permitting from the Environment Agency in England, Scottish Environmental Protection Agency and Natural Resources Wales.

To make the most from the investment, he advised producers to try and find a suitable use for the heat produced as part of the process.

“Finding an optimum use for the spare heat is critical for the project; you can make a really good return if you can find a profitable use for the heat,” said Mr Harwood.

Initial capital outlay for AD was high, although government subsidies made payback periods attractive, he said.

“Government subsidies are a reasonably generous form of support which is long-standing. Once you are in the system you get it for 20 years and that’s plenty long enough.”

Banks and lenders would carry out due diligence on all projects before lending money. This included looking at feedstock assurance and supply, construction warranties, operator experience and business cashflow. “Banks were not willing to lend without security,” he said.

Farmers also needed to be aware that cashflow would be hit in the early days as there was a lag between initial capital outlay and the point when a project generated income – planning for this was essential, he said.

However, Mr Harwood argued that there was a huge potential to use grass in AD plants, especially some 400,000ha of marginal land across the UK. This included edges of golf courses and airfield strips.

“If you introduce a break crop into your rotation to fit your biogas plant, then actually you are contributing to the overall sustainability of the farm as you are not pushing it so hard for one crop such as wheat,” he added.

Oliver Harwood was speaking at a recent AD seminar and site tour in Oxford organised by Nextgen – a two-day renewable energy conference being held in Stoneleigh Park on 9-10 October.

On-farm renewables in the spotlight