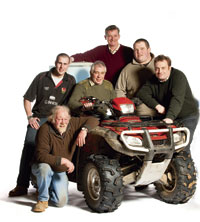 It’s surprising how old some farm workers are. The average age is 36 but one in four are 35-44 and one in five are 45-54. It begs the question: are we attracting enough young people into the industry?

It’s also staggering that 90% of the workforce is male. I know farming is a male-dominated industry and we’ve only had three female pre-work students in my time at the Stoughton Estate, but they have been among the best employees I have seen.

I wonder whether we are doing enough to tempt young people into a career in farming. Youngsters like certainty – they like to know how much they are going to be earning and that isn’t always an easy question to answer.

The hours we work in agriculture vary so much and that can be a challenge. Workers often want certainty and we can’t give that because of many different factors, the weather being the biggest one. One job applicant told me he could earn as much working shifts at a local McDonald’s as on the farm and he would have regular hours so he could plan his social life.

To overcome this, maybe farmers should look at an hourly versus salary system – offering a consistent wage throughout the year might be better for workers who want to avoid peaks and troughs in pay. It would help spread the work out over the year as they could go home when there was nothing to do rather than hanging around trying to earn an extra hour of overtime.

We have introduced a 14-day rule at the Co-op so no-one works more than 14 days on the trot without having a day off through the harvest period. I can’t believe that 17% of people have no paid holiday at all. Maybe they’re just not taking their entitlement – for many farming is more than a job, it’s a way of life and it can be tough leaving a farm when there’s work to be done.

But I think it is a disadvantage to farming that our industry is seen as one that involves long hours for low pay – it doesn’t make it attractive.

Being able to live in a tied house is something that in many ways is unique to farming. But there are pros and cons to the perks of any job and farming is no exception.

Living in a tied house is a case in point. It can be a useful perk but you get situations where somebody has worked on a farm all their life only to retire and have to find somewhere else to live.

They often can’t afford to buy in the same village and end up having to move away from the people they know and place they’ve lived all their life to a council house somewhere where they know nobody.

When you’re earning less than £20,000 it can be difficult to afford a mortgage for a house, especially in rural areas where prices have been forced up by wealthier commuters. It’s something that needs to be addressed.

I’m surprised that little more than half the people who responded to the survey answered this question. Does it suggest that those who didn’t answer have received no training at all? It’s hard to tell.
I do know that the Pelletwise campaign aimed to get 10,000 people trained in the responsible and correct use of slug pellets.

So far I think only 3000 people have received training.
As an industry, we need to be far more proactive and practical when it comes to training and qualifications. Yet I think sometimes that farmers and farm workers are guilty of viewing training as a hassle.

People appear to acknowledge that training is important, but it doesn’t look like many are turning their thoughts into action. People say they need training, but only a few are actually doing something about it.

I think the European Working Time Directive says people should work no more than 48 hours a week, which means only one in four people on British farms are working within these limits. It’s a very high average.

What this shows is something we all know – that most people working in agriculture view farming very much as a way of life rather than something that they see as “just a job”. For most of us, it is far more than that.

Sometimes, though, work can easily take over. Given the chance, I think we’d all choose to work a little less, so we had more time to enjoy the fruits of our labours and life in general.

It is comforting to see how many people feel safe in their job. I’ve always thought farming to be a relatively secure career. With current uncertainty in the economy, maybe that is something we should be shouting about. “People will always need to eat,” my mother said when I told her I wanted to follow a career in farming.

It is good too to see so many people happy in their job. Some people might argue that four out of five people seeing themselves in the same position in three years suggests a lack of ambition but I think it illustrates contentment.

That said, I’m intrigued by the 6% who say they won’t be in farming any longer. It’s a small but significant minority and I would like to know their exit strategy and reasons for getting out.

The survey has highlighted some of the issues we must get to grips with as an industry. Everyone in farming knows how exciting it can be. But we need to make sure we are equipped with the right skills.
We talk a lot about the need to produce more food and the need to become more self-sufficient. That means developing our skills as well as attracting the right calibre of people into the industry.
Not everyone can be a farm manager, but we can all improve the way we work. People have to be given the chance to find what they are good at – the industry needs a broad spectrum of talent and there’s an exciting potential for everyone to be involved in what is a brilliant industry.