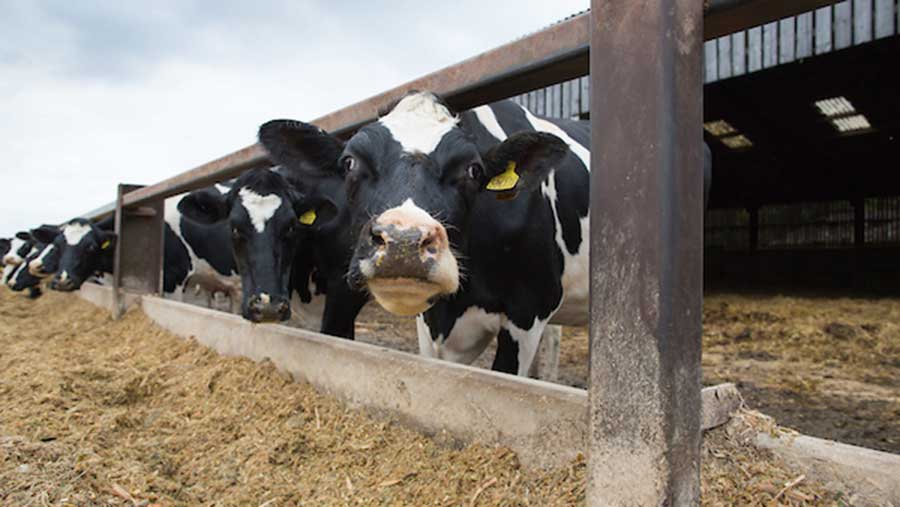 A hard Brexit leading to a weaker pound and high inflation would be the best post-EU scenario for UK farmgate milk prices, according to new analysis from Kite Consulting.

The deal, which would include restrictions on non-UK agricultural workers, WTO rules and tariffs and no new trade deals for three to five years, would return a milk price of 32p/litre – the highest of the four eventualities modelled in the report.

However, such a deal would also drive average costs of production upwards to 30p/litre, leaving 1.5m litre herds with a retained profit of 2p/litre, with larger 4m litre farms predicted to more competitive 3.5p/litre.

The worst scenario, which involved a soft Brexit and strong pound, with access to the single market and freedom of movement of people to the EU, modelled a milk price of 24.6p/litre, driven down by cheap dairy imports.

In this model, lower input costs help bottom lines, but they do not sufficiently prevent losses on retained profit of -3p/litre for smaller units, while 4m litres farms perform marginally better at -2p/litre.

Under this model, the UK dairy industry would return to a similar situation as seen in the early 2000s, with production falling and low cost, spring calving systems being the favoured approach by dairy farmers.

With a 35% chance of occurring, a soft Brexit with weak sterling was the most likely outcome for the UK, according to Kite.

This model, with strong access to the single market and no tariffs, returned the second highest milk price at 29p/litre. However high production costs only returned a retained profit of 0.5p/litre for the biggest (4m litre) farms, with 1.5m litre units operating at a loss of -1p/litre.

Kite added that there was a small chance of a slight decrease in UK production and that this scenario was the closest model to the industry’s current position.

Subsidies were estimated to be a third of their current levels based on current government rhetoric for the four modelled Brexit results, worth between 0.3-0.5p/litre.

The strength of sterling would have a greater impact on UK farmgate milk prices and farm profitability in the five years after Brexit than anything else, according to Kite.

The best projected milk price of 32p/litre relies on a weak pound following a hard Brexit, whereas the lowest price of 24.6p/litre would come as a result of strong sterling and a soft Brexit; price volatility was anticipated to remain under all scenarios.

A poorer UK economy would be the best result for the dairy industry due to the fact that it is a net importer of dairy products, with a weak pound making foreign imports unattractive.

The report highlighted that seasonal fluctuations in UK production may have to be levelled out if access to Irish processing facilities were limited by a hard border in Northern Ireland.

Kite predicted that if prices hit the highest possible value of 32p/litre in a weak currency, hard Brexit situation, production could increase to fill the void left by diminished imports of approximately 2bn litres a year within two to three years.

Government intervention to keep food prices and inflation down could not be ruled out, nor could supermarkets changing sourcing policies to deliver competitive pricing to customers, the report said.

The only Brexit effects that can be predicted with any degree of certainty are that difficulties with labour procurement and cost will continue to worsen after the UK leaves the EU.

The possibility of restrictions on immigration post-Brexit would make finding staff more difficult, with a weak pound meaning wages would be less competitive compared to other countries on the continent.

An increase in labour costs of 8% was predicted, according to Kite, but retaining staff would require more than just higher wages to make positions adequately attractive.

Despite the exact Brexit scenario remaining unknown, there will be a period of uncertainty and volatility, whichever direction the UK heads.

Of each of the four modelled situations, there was only one that offered the returns to deliver a sustainable dairy business – a hard Brexit and a weak pound.

Kite offered seven action points for farmers to put themselves in the best possible position for whichever scenario materialises when the UK leaves the EU.