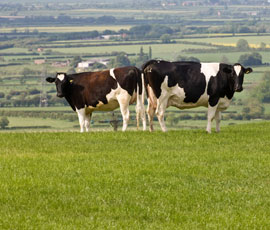 Farmgate milk prices appear to be holding steady despite pressure on commodity markets and Tesco’s decision to cut the price for its suppliers.

Producers on the Tesco Sustainable Dairy Group cost-tracker contract will see their price cut by 0.65p/litre to 29.56p/litre from 1 April, while TSDG members not on that contract will get 29.06p/litre.

The move followed a review of budgeted farm production costs for the next financial year by consultant Promar. It found a large fall in feed costs (wheat prices were £45/t lower in the year to February) had more than offset increased fuel and labour costs.

It was feared the move could spark a wave of spring farmgate price cuts, despite recent warnings from the NFU that farmers would not accept such moves. For April at least these fears have not materialised, but processors remain tight-lipped about future prices, for fear of pre-empting the market. With increased competition for milk among buyers, many may also be reluctant to move first.

Milk Link has already confirmed it will hold prices next month, while both Wiseman and Arla promise to give farmers at least one month’s notice of any price movement, so it seems fairly safe to assume no change for April. First Milk also has no plans to change its April milk price, while Dairy Crest declined to comment on future prices – its suppliers get a week’s notice of any price change. DC is the UK’s only publicly-listed milk processor and was due to issue a full-year trading update on Thursday (29 March).

With processors talking of tight margins due to “tough trading conditions”, retail pressure and rising costs, particularly fuel and plastic, farmers will hope these pressures abate soon. A recent Rabobank report suggested any such turnaround could take some time though. It said the second quarter of 2012 would see further downward pressure on world prices as any farmgate price cuts would come too late to slow increased spring milk output.

“Fundamentals should begin to rebalance as we progress through the second-half, though there is a risk of only weak price support at that stage given the prospect of significant stock accumulation in coming months if we have a strong northern hemisphere supply peak.”

Cumulative UK milk production for the 2011-12 season was running slightly (1%) ahead of the previous season, DairyCo said, while cumulative deliveries across the EU-27 stood at 112.5bn litres in January, around 2bn litres more than 2010-11.

DairyCo also said the average UK milk price in January was the fifth lowest in the EU-15, at 28.82p/litre.