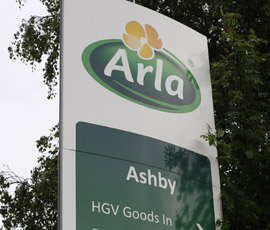 However turnover grew by almost 9% to £1.72bn in the dairy processor’s UK business in a year when consumers continued to focus on price and discount stores increased market share.

Retail price competition on fresh milk and heavy promotion of butter, spreads and margarine were also challenges which Arla’s directors expect to continue through 2013.

Supply and pricing of raw milk along with reliance on a concentrated customer base are seen as two of the key risks and uncertainties affecting the company, according to the directors’ report to the 2012 accounts.

Changing environmental legislation, oil and related product prices, pension scheme and insurance risks are also identified in the report, alongside dependence on key personnel, as important business risks and uncertainties.

Arla plans to enhance its farmer owners’ returns this year by realising the benefits of the merger with Milk Link, including the expansion opportunities this presents, as well as becoming more efficient and increasing market share of its brands, which include Lurpack, Anchor and Cravendale. Construction work on the co-op’s new 1bn litre dairy began in 2012.

Arla profits double in first half of 2013