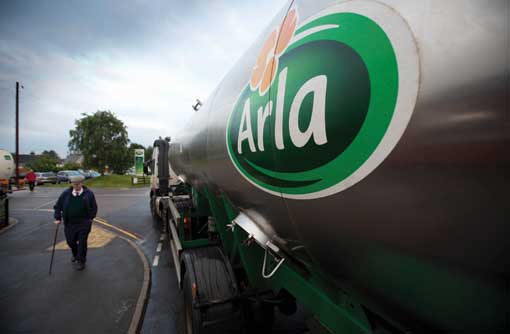 Arla is the biggest milk buyer in the UK, producing brands such as Cravendale, Anchor and Tickler cheese. Gemma Mackenzie went to Denmark to find out more about the European farmer co-op

Arla is a big player in the global dairy market, with more than 12,000 farmer owners across the UK, Denmark, Sweden, Belgium, Germany and Luxembourg.

The UK is a key market for the co-op, accounting for 25% of total turnover, and the merger of Arla and Milk Link in October 2012 further cemented the connection between the company and the UK. Arla Foods Milk Partnership (AFMP) suppliers are set to follow in the footsteps of Milk Link farmers and become full co-op members by early 2014.

Gearing up for the abolition of milk quotas in 2015, the company has a growth strategy for 2017, which revolves around finding a market for the anticipated extra 1-2bn litres of milk its farmers will produce.

• Develop the business in core markets (including the UK, Sweden, Denmark and Germany), and grow the Lurpak, Castello and Anchor brands

• Grow the company’s markets outside of the EU – Russia, the Middle East and Africa, and China have been earmarked as the three key areas

• Drive efficiency throughout the supply chain from farm to consumer.

In the UK, Arla is on the hunt for at least 800m litres more milk a year by 2017, bringing its total milk procurement up to 4bn litres.

So far this year, about 58m litres has been signed up from approximately 30 farmers, and the company anticipates recruiting 150m litres by the end of the year.

It is also on track to open the new £150m Aylesbury milk processing plant in October, which is capable of processing 1bn litres a year, or 240,000 litres an hour.

The company’s head of milk and member services in the UK, Ash Amirahmadi, says the aim is to become 110% self-sufficient in terms of retail customer needs – Arla UK is currently 85% self-sufficient, with the remainder of milk sourced from third-party suppliers.

“Our milk pool in the UK will increase through our own farmers growing and new farmers joining us,” he says.

Arla UK CEO Peter Lauritzen says the company has a two-step strategy for its UK operations up until 2017:

Implementation of a UK cheese strategy, to “unleash the full potential of the UK cheese business” and sourcing an extra 800m litres of milk a year by 2017.

One person, one vote

Arla’s philosophy is “one person, one vote”, says chairman Ake Hantoft. “Everybody is equal – I have never heard anyone say ‘I have a big farm, I’m more important than you’,” he explains.

In fact, all farmer owners are paid the same price across Europe, with minor variations based on currency.

“Milk Link [price] was based predominantly on the UK market but Arla’s milk price is based on the returns from all of our markets and all of our operations,” says Mr Amirahmadi.

Milk price and farmer return on investment in the co-op is worked out using a simple formula, he explains. Based on agreement with the co-op’s farmer board, 3% of overall revenue is taken as profit.

The 3% profit covers the annual return on investment, or the 13th payment as it is known to farmer members, and common and individual consolidation. The 13th payment is paid in April based on the previous milk year. For 2012 this was around 1.5p/litre. 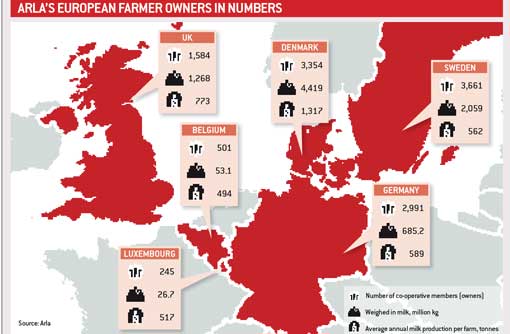 Thereafter, any costs are taken out of the revenue and the remaining money in the pot is used to calculate the milk price.

At present, Arla Milk Link farmers do not receive a 13th payment, due to the merger agreement. Their first 13th payment will be paid in 2017 based on the previous milk year.

Any farmers who choose to exit the co-op will have their individual consolidation repaid in years three, four and five after leaving. 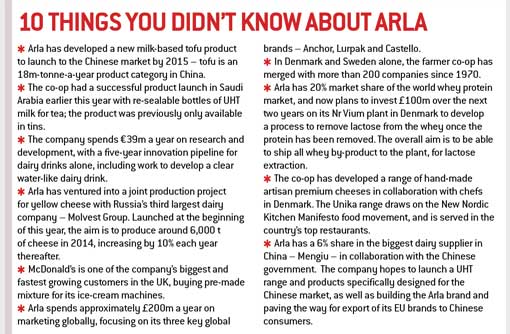 Arla to launch farm assurance in UK in 2014