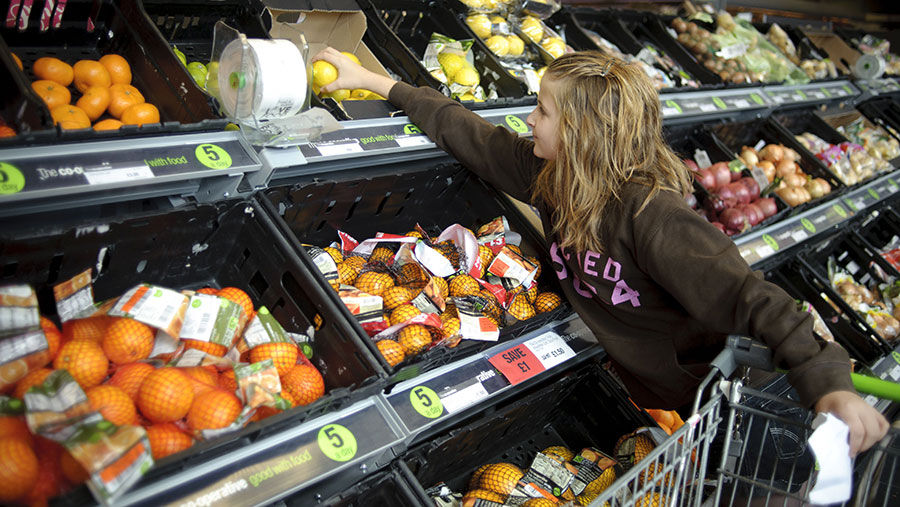 Shoppers back British food, but even a small price rise will cause them to switch to imported alternatives, an AHDB survey has revealed.

The survey for the AHDB’s latest Consumer Focus report looked at shopper sentiment towards “Brand Britain” and questioned whether there were any generational differences.

Almost 70% of shoppers wanted to see more British produce in stores, and three in four would buy more home-grown food if it was better value.

A total of 78% believed Britain needed to be more self-sufficient in food and not rely on imports so much.

But the findings showed just a 10% increase in the cost of a home-grown product would cause one in three shoppers to abandon their principles and buy a cheaper import instead.

The revelation suggested that maintaining price competitiveness would be key for the UK agricultural sector in a post-Brexit world, the AHDB said.

“To-date there is little to suggest a wave of patriotism has helped bolster sales of all things British since the EU referendum and relying on ‘Britishness’ alone is not the answer,” it warned.

Among the other key findings was a stronger commitment to British food from older shoppers who said they tried to buy British whenever they could.

Even so 74% of people over the age of 55 said increasing food prices were their biggest concern when it came to financial circumstances.

Therefore, any positive sentiment towards buying British will only count for so much as shoppers try to manage ever-tighter household budgets, the AHDB concluded.

Younger shoppers surveyed, were less likely to find “Britishness” compelling as a driver of purchase – highlighting the need for industry to look at how best to sell Brand Britain to this sector of society.

Younger generations were more likely to base their buying decisions on better quality, with health being a top priority. Convenience and time-saving were also important to this age group, the AHDB said

“The UK shopper is price conscious and increasingly so, given the current economic climate which is putting pressure on household budgets,” Mr Gill said.

“Sentiment towards buying British remains fairly strong. But this is against a backdrop of almost four-fifths of shoppers in an IGD poll stating that rising living costs were of concern to them.

“With real incomes only recently returning to marginal growth, the focus on price and, indeed, quality is likely to intensify in the foreseeable future,” he added.

And the levy board’s chief market development officer Christine Watts warned: “This evidence to-date serves only to highlight the uncertainty of what might happen in the future.

“In a post-Brexit world we can see that simply featuring the Union flag on products is not enough and so industry needs to demonstrate the other attributes they provide to meet consumer requirements around quality, provenance, supporting local farming and so forth.”

Ms Watts added: “It is also clear from this report that price is a key purchase consideration and remaining competitive will be crucial for home producers and growers. The concern we all have in the industry is that if the price gap gets too big, consumers will simply look for cheaper alternatives from abroad.”