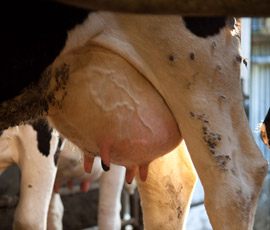 Dairy farmers’ margin over purchased feed fell by more than £30,000 in the year to May, according to figures from The Dairy Group.

In May 2012, the rolling margin per cow was £1,669 – by this year that had dropped to £1,518, said director Ian Powell. “The rolling milk price increased by just 0.8p/litre over this period, whereas the rolling feed cost increased by 1.5p/litre.”

The poor weather during 2012 had a huge impact on cow performance and costs of production – and the MOPF only reflected part of this, he added. “Our provisional analysis of dairy accounts for the year ending March 2013 indicates that the cost of production increased by 4.7p/litre. To restore just the lost £151 per cow would require a milk price increase of 2p/litre paid on all the litres produced in the year ending May 2013.”

Low butterfat levels were also eroding individual milk prices, said a report by DairyCo. “Average butterfat content for July was 3.81%, the lowest July level on record. That indicates that some farmers’ milk cheques may now be reduced as a direct result.”