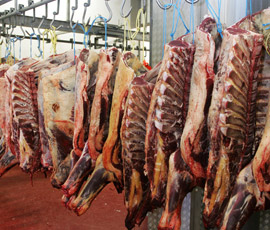 Northern Irish beef processors are flooding the local market by importing non-assured cattle from the Republic of Ireland, according to the National Beef Association.

Two large meat plants were importing around 13% of their beef from the Republic, creating an artificial surplus to depress local prices, said Oisin Murnion, the NBA’s NI chairman. “It’s absolutely scandalous and insulting to the farmers in this country. This is manipulation of the meat trade.”

Mr Murnion said the processors – which did not include ABP – were reportedly paying a premium, flat-rate price of 328-324p for R- and O-grade cattle south of the border to secure supplies, while offering local farmers, with farm-assured cattle, £30-65 a head less.

“We have a lot of very small farmers in Northern Ireland who are cannon fodder to the meat plants. Fodder is scarce here and people are facing serious financial difficulties. They need to get rid of their stock and the processors know that, and are just ripping the bottom out of the market.”

Phelim O’Neill, chief executive of the NI Meat Exporters Association, said about 80% of NI beef was exported. “Most of that goes to GB, but a significant proportion [of non-assured meat] goes back to the Republic or to mainland Europe. There is a long-established tradition of cattle crossing the border each way. I don’t know what individual processors are paying for their beef – that is between buyer and seller – but average prices in ROI are always significantly cheaper than in NI,” he added.

“There is an ongoing debate about why NI prices are lower than other parts of GB. It could reflect differing quality of cattle, but the Livestock and Meat Commission is investigating this, and we are fully co-operating.”

Keep up with the latest prices and market trends