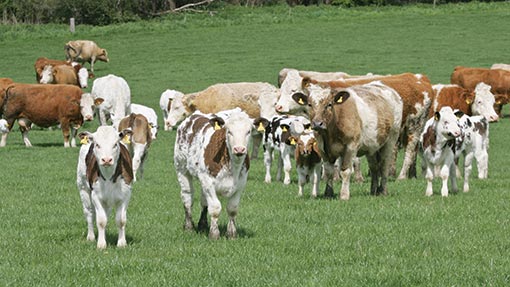 Beef prices have shown tentative signs of recovery after plunging sharply in the first half of the year.

But cattle supplies remain high, with steer slaughterings in September up 8.7% on the year, which hints at stronger demand for British beef from consumers and supermarkets.

AHDB/Eblex senior analyst Debbie Butcher said there were signs of positivity in the market, but the widening gap between British and Irish beef prices might encourage retailers to look to imports.

British beef cattle are currently making about 60-70p/kg more than stock in Ireland, compared to the five-year average of 20p/kg.

“Prices are up on higher supplies which is pretty positive and shows the retail climate may have shifted a little bit,” she said.

“There are some tentative concerns about [high] supplies still on the ground here and in Ireland.

“While our prices have rebounded, they have not across the water in Ireland, which is attractive to retailers.”

Eblex’s last retail report showed spending on fresh beef in the 12 weeks ending 20 July was 4.1% higher on the year by volume and up 6.5% by volume.

It said growth had been helped by in-store promotions, with half of the mince sold being on offer.

Quality Meat Scotland head of economics services Stuart Ashworth said processors could be worried by the combination of rising farmgate prices, heavy average carcass weights and weakening demand for co-products such as hides and bones.

He said cattle numbers were forecast to tighten in the new year, which could add further pressure.

“The short-term prospective for the farmer is pretty robust – the price is not as high as it was last year, but the price of feed is lower,” he said.

“There is worry from processors about availability of future supplies and pressure on prices from supermarkets.”