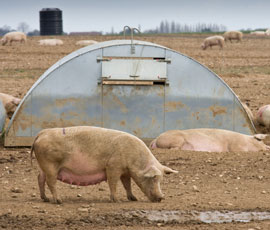 After a difficult start to the year, signs are emerging of better pigmeat prices in the months ahead.

The Deadweight Adjusted Pig Price has slipped from 147.6p/kg at the start of the year to 140.5p/kg for the week ending the 9 March, but market sentiment is changing. Spot quotes are always first to react and since mid-February average spot bacon prices have risen from 134p to 143p/kg.

Improvements will soon feed through to the DAPP and weekly shout prices announced by the big five bacon abattoirs, which have raised prices by an average of 5p/kg over the past three weeks.

European pigmeat values are also on the upturn with the average basket producer price for the six main European mainland pigmeat production countries increasing by 9% from 120p/kg to 131p/kg.

Cull sow quotes provide a ready indicator of European manufacturing pigmeat market and since the start of the year average prices paid by UK cull sow exporters have risen almost 10% from 115p to 126p/kg.

Weaner values have however remained generally static over the past month with the latest Agricultural and Horticultural Development Board 30kg ex-farm weaner average holding at £45.57 a head.

But feed costs have risen with recent ex-farm feed wheat prices of £162/t and forward quotes on the LIFFE futures market remaining bullish with May-July values in the £172-174/t range.

The latest DEFRA UK pig herd census also flags up a lack of confidence among UK pig breeders with a year-on-year reduction of 4.4% in the number of sows in pig. The female breeding herd showed a 3.1% reduction.

Many UK breeding herds have been losing money for the last three years and a rapid return to profitability is needed.

At the same time pig producers face more red tape as well as opposition to pig production systems from animal welfare groups, the consequences of which were underlined by the recent tragic death of Norfolk pig farmer Stephen Brown.

In light of this BPEX announced a review of farm assurance standards, which may result in more stringent inspections, increased assurance changes, and possibly unannounced visits.

Under European rules a four-year review is being carried out on Nitrate Vulnerable Zones, which may result in the whole of England becoming an NVZ. This could mean the replacement of old slurry stores, restrictions immediately after slurry spreading closed periods to prevent nitrate overload and a resolution of the vexed question of NVZ whole farm averaging levels for outdoor pig units.

Slurry stores built before March 1991 are exempt from regulations, but if this exemption is dropped owners of pre-1991 stores would have to comply with current slurry store regulations before December 2015.

Additional regulations will also be applied by the EU following sweeping changes to pig welfare laws in January 2003, due to be triggered in January 2013.

British producers will also be closely studying the effects of the January 2013 Partial Stalls Ban. Pressure is mounting for EU derogation on sow stalls and there may be non-compliance in some EU countries. The additional capital costs may put downward pressure on EU mainland pigmeat supplies.

MEP’s are also pressing for an eight-hour live animal transport limit that could put pressure on Scottish producers sending cull sows to abattoirs in southern England.