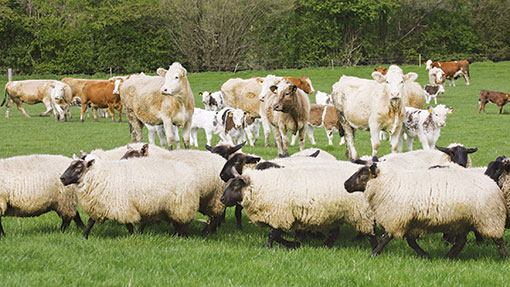 Growing meat demand and falling feed costs point to a good year ahead for the meat sector, according to Richard Brown, director of market research firm Gira.

Global meat consumption should grow 1.5% in volume this year, driven by better economic growth in the recovering eurozone and the continued surge of China, Mr Brown told the AHDB Outlook conference in London.

He said the price outlook seemed positive with a tighter global meat supply, falling feed costs and a robust 2% increase in meat trade.

“There is some risk of things going horribly wrong but it seems to us a risk lower than in previous years.

“We have got worldwide a good growth of expenditure on meat.

“It is a fundamentally better time in this period, with peaks in 2008 and 2011 that have been sustained, with people spending more money on meat. That is quite positive.

“So there’s all reason for a better living for producers and in the long run a better time for processors.”

Mr Brown said he expected relatively higher producer prices for meats to continue and despite a potential small drop in 2014, the price level would be much higher than 2006-07 and the tough times before that.

Mr Brown said the world trade dynamics were changing, with high meat prices in China and Russia relative to the other markets.

Exports from Europe to growing world markets, especially in pork, had grown.