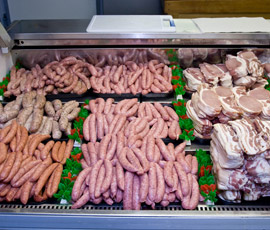 A small increase now in the price shoppers pay for bacon, sausages and ham will prevent massive price increases in the next six months, a new BPEX report has found.

The report – The Impact of Feed Costs on the English Pig Industry – claims a modest increase of 10p/kg would allow farmers to break even and prevent massive price hikes for consumers in the next six months. In retail terms, this equates to an extra 16-28p in the retail price for a pack of pork chops, 6-12p on sausages and 7-14p on bacon.

The current cost of production is estimated to be £1.70/kg and the average price paid to farmers is around £1.55/kg resulting in losses of approximately £14 for every finished pig; without price increases, BPEX says the losses for the industry are set to hit £100m over the next six months, forcing many farmers out of business

The levy body estimates the EU pig herd will decline by 8-10% over the next few months which could result in a price increase of around 50p/kg – a recent 4% herd reduction in Germany led to a 26p/kg increase in the price paid to farmers.

The levy body conducted research with YouGov which suggests consumers support the need for a small increase in the price paid for pork products.

Key findings from the poll*

“Cost of production has soared due to big increases in feed cost and yet again pig farmers are facing big losses,” said Andrew Knowles.

“A relatively modest increase of just a few pence now on the retail price would cut farmers’ losses and prevent massive increases to shoppers next year if pig production drops.

“It’s a difficult time to be talking about price increases with many consumers feeling the squeeze, which is why it’s so gratifying to see that consumers appreciate the need for small increases and the majority are happy to pay a little bit more for pork, bacon and ham, produced responsibly by Red Tractor farmers.”