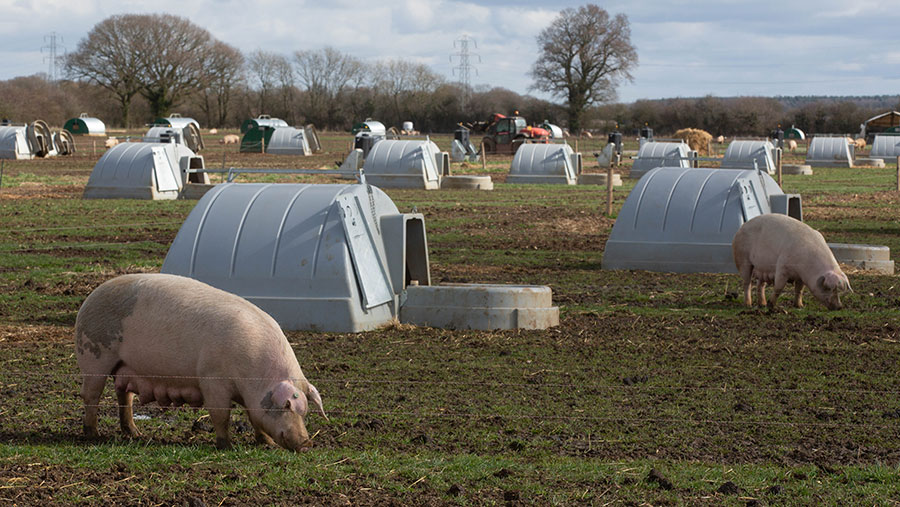 Finished pigs have been hit by the largest weekly price fall in five years, as cheap EU imports flood in and Brexit restrictions slow UK exports to a trickle.

In the week to 9 January, the EU-spec SPP averaged 144.74p/kg – almost 2p/kg below the previous seven days, according to AHDB figures.

Average prices now sit 17.66p/kg below the same week in 2020, although the price is still slightly above the five-year average.

See also: Why Angus are earning an integrated finisher more than Blues

Supply has been bolstered by rising throughputs, after the Christmas lull, and record carcass weights. Total slaughter numbers rose by 38,600 head week-on-week to total 173,400 head, while carcass weights broke the 90kg mark for the first time, the AHDB said.

Supplies of cheap German pigmeat have been mounting on the EU market. Stocks have been driven up since China and other key Asian markets banned German imports after African Swine Fever cases were isolated in wild boar last September.

With no outlet in the Far East, large quantities of this cheap pigmeat are rising.However, production costs in the all-slatted, industrial type units and cheaper labour mean German farms can still turn a profit at current prices equivalent to just 106p/kg.

At the same time, UK exports are being subjected to lengthy delays as officials carry out intricate checks on each batch.

The progress of UK products has been slowed to such an extent that some consignments are being rejected as too old. This has made exporters reluctant to ship pork which may ultimately have deteriorated to the point of rejection at its final destination.

The knock-on is a further build-up in supply this side of the Channel, which is causing a backlog on farms and pushing carcass weights to record levels.

But buyers don’t want fatter meat, so the price to the farmer is further reduced as quality declines, Mr Crichton said.

Amid the turmoil, the cull sow market, almost totally dependent on exports to Germany, has collapsed.

The ASF issue meant Germany had adequate supplies but the situation has been made worse by Covid-19 outbreaks halting processing at major plants.

“Add to this, soaring feed and straw prices – made worse by the dismal weather for outdoor units – and we have an awful situation on farms,” Mr Crichton said.