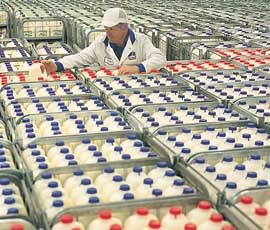 NFU president Peter Kendall has called Britain’s place at the bottom of the EU’s milk price league table “a disgrace”.

“It’s just plain wrong that British dairy farmers are paid the lowest prices in Europe. They’re receiving around 4p/litre below the EU average which is a disgrace. Something has to change”, he said.

“Volume production is finally turning a corner and, despite declining farmer numbers, average yields and efficiency are improving. UK producers want to expand their businesses, but market signals tell them to do the opposite.

“The dairy industry urgently needs fair terms and conditions of trade and that’s why the NFU is backing calls for a voluntary ‘code of practice’. As part of our campaign we have been lobbying MPs and dairy processors to push for the introduction of fairer contracts. We believe these will deliver negotiating strength and price transparency to dairy farmers.

Mansel Raymond, NFU dairy board chairman, said: “The position the UK milk price now occupies in the EU league table is nothing short of scandalous. The clear fact for all to see is that equitable transmission of price and margin in the supply chain is not happening.

“Farmers are anxious to invest to expand as we head to the end of milk quotas. There is simply no excuse for procrastination or failure to pass on price rises to farmers. There has never been a clearer signal that things have to change. We have identified the weaknesses in most existing milk contracts – let’s work together to put things right so we can look forward to a future of growth and profitability.”

Figures from the EU Commission’s Directorate-General for Agriculture and Rural Development showed that in April the average UK farm gate price stood at €28.89/100kg (26.26p/litre) – the lowest price of any nation in the EU-27.

The UK price was a 10% improvement on domestic farmgate milk prices in April 2010 but is still way below the 37.68p/litre being paid to Greek producers in April this year.


Dairy farmers in eight of the EU 15 member states were getting well above 30p/litre while among the whole EU 27, those in Cyprus and Malta were being paid more than 40p/litre.