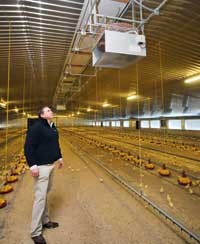 Gas savings of over 15% are achievable by using de-stratification fans in broiler houses, according to a new study by the Farm Energy Centre at Stoneleigh.

The research was conducted for ventilation equipment supplier Hydor, to study the effects of the company’s de-stratification system on temperature distribution and energy consumption in a commercial environment.

Five evenly-spaced fans were installed in a 50,000-bird poultry shed, which was heated by eight direct-fired LPG heaters and ventilated by 22 ridge fans.

The de-stratification fans were switched on and off on alternate days for a one-month period and temperature measurements taken at 14 different points.

Day-old chicks were put in on day four and allowed to grow as normal.

In terms of temperature distribution, the study showed that, with the fans off, the average difference between the top and bottom of the shed was 7C. With the fans turned on, that difference narrowed to 5C.

According to the researchers, the improvement in temperature stability from running de-stratification fans was greatest in the early stages of the crop – up to about day 20. Thereafter, the differences were less marked as the ventilation rate increased and the volume of “de-stratified” air became less significant.

“It is thought that this improvement in temperature distribution across the shed could result in better growth rate and feed conversion, assuming the birds respond to a more accurately controlled thermal environment,” says the report. (See panel)

Better temperature mixing also helped the air warm up more quickly at bird level when the heaters were switched on, so shortening the operating time and saving energy.

The Farm Energy study calculated that, had the fans been on every day rather than every other day, the heaters would have been running for 167 hours rather than 199 hours during the month trial.

This would have resulted in a gas saving of 2449 litres which, with gas priced at 45p/litre, would have given a financial saving of £1102.

Against this, the five Hydor fans consumed a total of 430kWh of electricity, costing just £43 to run, giving a net saving in operating cost of £1059.

“It is difficult to draw out a yearly projection, due to the fact that the test was carried out in the winter, so generally gas use will be more,” says the report. “Also, the trial did not continue toward the end of the bird cycle, when set temperatures are reduced.

“Nevertheless, in terms of pure percentages, there is no technical reason why a 15% heating fuel saving could not be sustained through the whole year.”


Effects of temperature on growth rate

The distribution of temperature within the poultry shed is critical to maximise production efficiency and hen welfare, says Farm Energy in an annex to the study.

For any type of livestock, there is a temperature at which an animal will start to divert more energy from growth into maintaining its own body temperature. This level is called the lower critical temperature (LCT).

At the other extreme is the upper critical temperature (UCT), where the animal will use extra energy to keep cool, for example through sweating or blood vessel dilation.

Between the two is a “thermo-neutral zone”, where body maintenance factors are at a minimum and the maximum use of an animal’s food is obtained for growth.

Factors that can contribute towards the critical temperature can include the strain of bird, stocking density conditions and feed requirements.

The effects of temperature distribution within a poultry shed can have a large effect on crop yield.

In the shed in this study, the thermostatic temperature control was located about a third of the way across to the left. This was a position where temperatures were typically lower than in the centre of the shed, but higher than at the far left when the fans were off.

So, when the heaters came on, the centre was already above the set point, while the sides of the shed were below the set point.

This could mean that birds to the left and the right may not be growing at the optimum rate, and may be eating more food than is considered ideal.

Equally, birds in the centre may be eating less food than is best for food conversion and growing at a lesser rate.

With a more even distribution of temperature, as facilitated by the fans, the feed intake, growth rate and food conversion rates can be maintained at an optimum throughout the entire shed.