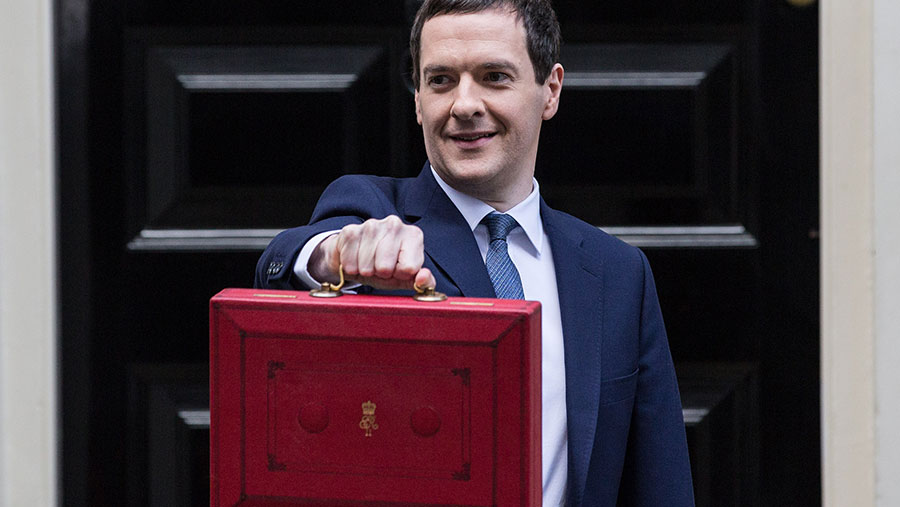 The 2016 Budget looks farm business-friendly on the surface. The chancellor revealed several tax tweaks to help small firms, which took the focus off stormier economic forecasts.

There was extra cash for flood defences and a further freeze in fuel duty. But there was nothing specifically aimed at farmers, whose incomes have crashed over the commodity crisis.

Storm clouds in the world economy, and fears of an EU exit, mean Britain’s prospects for growth have been downgraded.

This could hurt demand for farm products, but sterling’s weakness might help those selling abroad.

The chancellor spent a long section of his speech bemoaning Britain’s sluggish growth in productivity (how much you produce, for how much you put in). The independent forecaster doesn’t think growth will return above 2.1% for a long time.

Agriculture has long struggled with productivity too, as the 2015 Oxford Farming Conference report complained. But the Budget contained no changes that make improvements in the countryside. There was nothing on helping the most isolated communities receive superfast broadband, and no new measures on boosting investment on farms.

Welcome to the company

The corporation tax rate will fall from 20% today to 17% in 2020. This seems encouraging and was welcomed by the wider business community.

It will mean a tax cut for farms trading as a company — but that is only one in 10. Accountants and lawyers think it will make company structures much more attractive.

From 6 April, the higher rate of capital gains tax (CGT) is falling from 28% to 20%. The basic rate will also drop from 18% to 10%. This won’t apply to residential property, but could reduce the tax bill on sales of land and farm buildings.

The rules on “associated-disposals” have also been firmed up. This gives relief from CGT when an owner’s assets are passed on to family member when they retire or step away from the business. The chancellor has backdated this relief to 18 March 2015, which could help those who passed on property last year.

The self-employed, who include many farmworkers and contractors, will not have to pay class 2 national insurance contributions from 2018. This will save self-employed people about £130 each a year.

This will help farms with diversified businesses, such as shops or restaurants. The chancellor claimed more than 600,000 firms would now be free of rates.

For those still paying, from 2020 the annual rise will be switched to the lower consumer price index (CPI) to the retail price index (RPI).

The government will spend an extra £700m on flood defences in areas deluged this winter. This will affect York, Leeds, Calder Valley, Carlisle and other parts of Cumbria. It will be funded by a 0.5% rise in the insurance premium tax.

Fuel duty has been frozen again – good news for farmers’ diesel bills and for others living in the countryside who can only get around by car, especially when coupled with the plunge in oil prices.

A tax on sugary drinks will start in two years’ time. Dairy farmers – who would not welcome the extra kicking – will be delighted milk-based drinks are exempt. It could even make their products look more appealing, if Coke and Irn Bru become more expensive.

Fresh-produce growers will be pleased pure fruit juices dodge the tax, too.

There may be a knock-on for sugar beet growers, though it’s far too early to judge any impact.