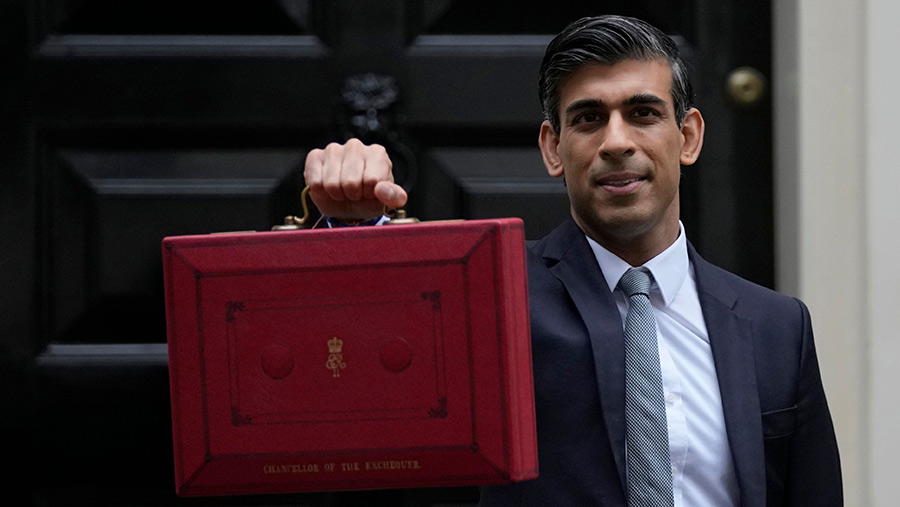 The main Budget offer for farmers is an extension to the annual investment allowance (AIA) at £1m until March 2023.

The allowance offers 100% relief against spending on plant and equipment in the year it is purchased.

The AIA had been due to drop to £200,000 from January 2022, after having originally been increased to £1m for two years from January 2019, then extended at that rate a year ago.

“This offers an extended opportunity for farming businesses to invest in equipment and vehicles and obtain an immediate tax deduction,” said Peter Griffiths, tax director at accountant Hazlewoods.

“The level of the relief may mean that a taxable loss can be created which could result in a tax repayment for an earlier year.”

While the extension is a welcome move, accountants have also commented that short notice of changes on this scale make it difficult for businesses to plan investments.

See also: How does tax averaging work for farmers?

Sam Kirkham, a partner in the farms and estates team at Albert Goodman, pointed out that while the AIA had been extended, there was no mention of extending the so-called 130% super-deduction to sole traders and partnerships.

“Likewise, there was no mention of extending R&D tax relief to unincorporated businesses, which is disappointing,” she said.

Further measures that will benefit farming and rural businesses include the suspension of the planned rise in fuel duty, a now familiar move carried out in many past years’ Budgets.

This will give business rates exemptions and reliefs in England for eligible green technologies that help to decarbonise non-domestic buildings.

It remains to be seen whether a pledge to prioritise brownfield sites for housing development relieves any of the pressure to put farmland under concrete.

A new business rates discount for companies in the retail, hospitality and leisure sectors will benefit some diversified farm businesses.

“This is welcome for farm shops, campsites and holiday let businesses, but there was no mention of any permanent VAT reduction,” said Ms Kirkham.

Those making farm-based alcoholic drinks may benefits from a reform of the rates on beers, wines and spirits, with the regime simplified to six rates, making some stronger spirits and wines more expensive, but reducing rates for weaker alcohols like beer and rosé wine.

Sparkling wine producers will benefit from a reduction in the rate applied to their produce, bringing it in line with that for still wines. Duty is also being cut on fruit ciders to the same rate as apple ciders.

In what was termed the biggest cut to beer duty for 50 years, a draught relief will apply a 5% cut to duty on draught beer and cider served from containers larger than 40 litres.

This Budget has been criticised by farming and other rural interests as much for what it failed to do as for the measures that were announced.

TFA chief executive George Dunn was disappointed that there was no meaningful change to the taxation system governing how farmland is occupied.

“With average farm business tenancy lengths of just over three years, and 90% of all tenancies let for five years or less, this is not conducive to farm business planning, environmental management, regenerative farming, investment, growth and tackling issues around climate change,” said Mr Dunn.

“Longer-term tenancies are urgently needed, and this can only be delivered by landlords being incentivised through the taxation system to offer those longer tenancies.”

He also fears that the increase of £625m for the Nature for Climate Fund, confirmed by the Budget and spending review, would incentivise landlords to resume possession of tenanted land for tree planting in England.

“The headlong rush into tree-planting schemes fails to take the required strategic approach to looking at carbon storage and sequestration in the round.  Through the management of grasslands, soils, hedgerows and other vegetation, UK farmers are already doing much to both sequester and store carbon.

“Diverting land from food production to trees risks off-shoring our carbon problems by displacing carbon-efficient farm production at home with food and other products produced with higher carbon footprints imported from abroad.”

No plan for rural prosperity

The Country Land and Business Association (CLA) said the Budget showed that the government had no plan to create prosperity in rural areas.

“All too often, when government talks about the countryside it does so in the context of keeping it the same,” said vice-president Victoria Vyvyan.

“But there is no ambition to show what the countryside could be – a vibrant part of the economy that creates jobs and encourages entrepreneurship, all the while building strong communities in which people can afford to live.

“The rural economy is 18% less productive than the national average, largely due to poor infrastructure, poor skills provision and an outdated planning regime. As a result, underemployment and deprivation take root.

“However, if the government brought its ‘levelling-up’ agenda to the countryside and focused on reducing the productivity gap, up to £43bn could be added to the economy with the creation of hundreds of thousands of good jobs. Today was a missed opportunity.”

The announcement to build more homes on brownfield sites might make sense, said the CLA, but given less than 10% of available sites are in rural areas, it will do nothing to ease the rural housing crisis.

This was echoed by Paul Madeley, managing director of Madeleys Chartered Surveyors, based in Much Wenlock, Shropshire.

“It is fine for the the government to allocate £1.8bn to build 160,000 new homes on brownfield sites, but this does not address the issue in rural areas like Shropshire.