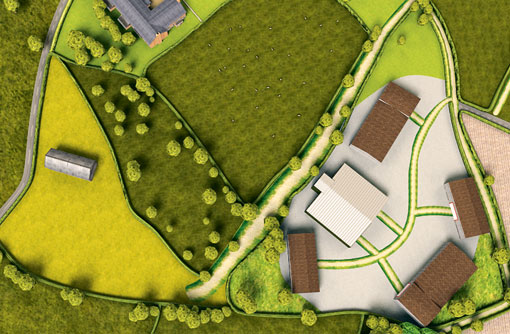 Arable prospects have tightened at the Farmers Weekly/Savills Virtual Farm due to a sharp fall in commodity prices, upward pressure on costs and a weaker euro.

“Wheat prices came back sharply – fears of a world shortage of grain receded and we also saw some effect of the weaker euro before Christmas. Although prices have recovered somewhat due to renewed weather concerns we are predicting an average of £141.75/t, down £20/t on last June’s prediction.”

A small increase in agchem costs has compounded the predicted profit slide for 2012. “The cost of producing a tonne of wheat at Virtual Farm was put at £119.08 last June. We are now budgeting for £120.64/t,” says Mr Hall. 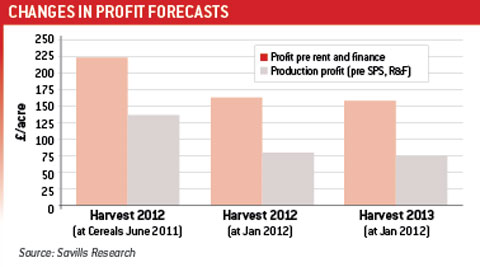 Total spray cost for a crop of first wheat is put at £22.65/t, up almost £2/t, while fertiliser accounts for about £38/t. The cost of a tonne of nitrogen remains unchanged at £350/t, and changes in phosphate and potash (up and down 10% and 5% respectively) all but cancel each other out.

However, the price of N has varied considerably during the past six months, says Mr Hall. “When you look over several seasons, buying fertiliser early continues to be the best policy to keep prices down.”

It is more difficult to protect against increases in spray prices. “However, if you are going to be using a popular product and stock is available then get it on farm. Every year we see increasing shortages of certain products and this drives prices up.”

Fuel, although stable during this period, is another volatile input worth watching.

“If you are a big enough operator or you can join forces with others, it is possible to hedge fuel. But for most it is not easy – if prices stay at these higher levels then farmers will need to be more innovative to make savings.

“Some of our clients are really starting to examine fuel costs, and the biggest of these is cultivations.”

In cash terms, the overall difference between the budget drawn up in June last year and the latest one is a reduction of £113,624 for the 2012 harvest year – largely due to the lower grain price. “Simply put, if we had sold all grain back in June the farm would be about that much better off,” says Mr Hall.

For simplicity’s sake the Virtual Farm sells its grain in equal amounts every quarter, at the futures price available when the model is updated.


Some farms will already have taken action to mitigate the downturn. “On Savills’ managed farms we draw up detailed marketing plans to suit the clients’ objectives. Every farm has its own strategy, but people whose objective is to make good profit – rather than chasing the last pound – may well have already sold 50-60% of their grain.

“They often ask us to do a sensitivity analysis on the budget showing profits at a certain price, and to assess the likelihood of that price changing. A decision can then be made at what level to sell at to lock into the desired profit.

“It’s a sound policy that takes the emotion out of marketing – it may not always be the best price, but they are securing a profit rather than catching a cold if the price falls. Many will have secured an average around £150/t, enough to clear well over £150/acre before rent and finance and SPS.”

Despite currently budgeted prices being lower for harvest 2012, relatively speaking they look good. “As a result, more and more actual businesses are starting to trade out of overdraft for the first time in a long while,” says Mr Hall. 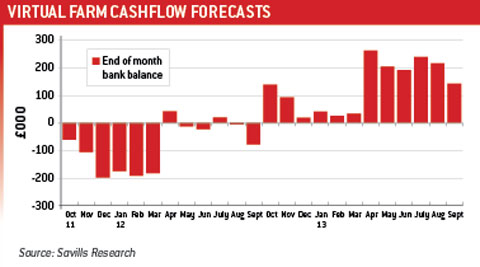 Virtual Farm’s improving but negative cash flow of the past couple of years is set to turn into a positive and improving position by next autumn. “However, it is a top 25% producer and some farms may have to wait a bit longer,” says Mr Hall.

“Talking to the bank manager to manage any cash flow pressures is often normally the best approach. Alternatively, it might be worth pulling sales forward a few months to ensure the money is in the bank when it’s needed most.”

The Annual Investment Allowance may be plummeting this spring, but Mr Hall advises against spending just to save tax. Virtual Farm has replaced a tractor, sprayer and drill this year at a cost of £178,000, so has made full use of it.

“It was a particularly expensive year. Anyone who still has a large percentage of their AIA available and is due to make a purchase early in the new tax year could pull it forward by a few months. But it makes no sense to change a machine that is supposed to remain on the books for a couple of years. Things might look very different in two years’ time – people should not be tempted to overspend on the back of the past two seasons.”

Given the problems in the eurozone, hedging the single payment against a weaker euro is an option that Virtual Farm may explore. For the past two years the currency has been put in to the budget at 85p. For this year and next it stands at 83p, shaving about £3/acre off the harvest 2012 year income, but further falls are likely, says Mr Hall.

“Hedging certainly seems like a sensible option at the moment. If the euro did slip to levels seen five years ago then it would really make sense.”

“Another way to prepare for a weak euro is to sell forward. Grain is currently worth £140/t for harvest 2013. This offers a real opportunity to lock in to a profit for a further season, profit that could evaporate if the euro does weaken and start to put real pressure on prices. It’s easy to forget that as recently as 2008-09 wheat was only worth £80-90/t.”

The rotation – 40% first wheat, 20% second wheat, 30% OSR and 10% beans – will remain unchanged for harvest 2013. “Given current prices, wheat and oilseed rape have to dominate. Beans have been very disappointing, but have been employed to control more difficult blackgrass areas.”

Other options are limited. One might be to grow sugar beet on an industrial contract, employing contractors to drill and lift the crop. Contracts for 2012/13 are still available at £26.50/t offering potentially good margins, says Mr Hall. 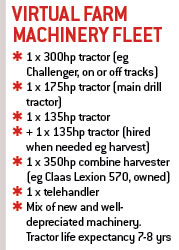 “The business has a net worth of about £12m and with interest rates as low as they are it makes sense to use that borrowing power to try to increase the proportion of stable income.”

The Virtual Farm has a set of traditional farm buildings, some of which are suitable for conversion. Off-farm opportunities, such as residential or commercial buy-to-lets, are also well worth considering, he says.

Renewable energy is another option – the farm has 40 acres of woodland that could be used as fuel for heating housing and the grain store. “There are new grants available to help start-ups, and other renewables like wind and solar power are still worth looking at.

“It’s time to consider all the farm’s assets and ensure they are being used as effectively as possible.”

• Farm budget is £113,624 worse off on price movements over past seven months
• Production profit before rent, finance and single payment from the 2012 harvest was forecast at £136.50/acre – now it is £80.69/acre
• Input and output cost fluctuations mean more attention needed to cash flows
• Continued high fuel costs need more scrutiny
• Cash flow improving but this is a top 25% farm – others might need to consider pulling sales forward
• Early fertiliser purchase has been right decision in past few seasons.