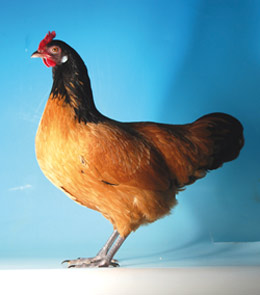 The National Federation of Poultry Clubs couldn’t have organised their annual show any closer to the Christmas break than this year. It took place in Stafford’s magnificent Bingley Hall.

Obviously this was a calculated risk as many exhibitors could have stayed away. However any such fears were unjustified and the Federation’s secretary, Adrian Keep from Bedfordshire, was able to boast that this year’s exhibits had increased by a phenomenal 650 entries.

It’s a classic event and this year most of the major award winners were classic exhibitors.

The supreme champion was a Buff Orpington, the quintessential British breed. It was owned by Richard Bett who’s a stalwart of exhibition, pure bred poultry in his native Lincolnshire. Richard, who is secretary of the East of England, had a really memorable weekend because he also took home another mountain of silverware after winning the prestigious Champion Trio title. He won this with Buff Orpingtons, too.

The Reserve Champion went to another poultry legend. The bird was a Grey Carlisle pullet belonging to Peter Watkinson from Hesketh Bank on the South Ribble. Peter has had a quite phenomenal decade and his truly impressive Greys have been no strangers to top awards, winning wherever Peter shows them.

Nancie Hutchinson from Nottinghamshire must be one of our most successful women exhibitors. She’s also deeply admired for the huge commitment she makes as both a secretary and exhibitor throughout her native Nottinghamshire and its neighbouring counties.

Her commitment to the poultry showing world extends to the Federation where she’s been a reliable committee member for years. Therefore, it was great to see her Japanese take so many trophies including the highly prestigious title of Champion True Bantam.

The rest of the major prize-winners were a litany of poultry leading lights. Lamb and Whitehurst have to be the most successful modern partnership, this time winning the bantam hard feather championship.

Denis Ash from County Durham did it yet again with his great Leghorns, but on this occasion he won the light breed championship with a brown pullet. It seems that every time Robin Ramus from Godalming in Surrey shows his Buff Rocks, he wins a major title. This time, he took the heavy bantam award.

Equally, the Wayne family from Lancaster have become an amazingly successful family dynasty with their rare breeds. Wayne, once again, won and took the Andalusian championship, but his new wife, Jen, continued her autumn Vorverk successes by winning the overall rare breeds championship. Their youngest son, David, had a memorable time with his Anconas, too.

However, there’s always one rogue result at any national show and this year it was the turkey sections which provided the fairytale result. The winner belonged to Marion Lovelace. Marion found a box containing one scrawny poult on Melton Mowbray Market. She felt so sorry for it that she bought it for £2.50. It grew into the magnificent bronze hen that took the title.

Poultry World has its own online photo gallery, with the aim of bringing you extra pictures from venues visited by our pure breeds reporter Mike Corrigan