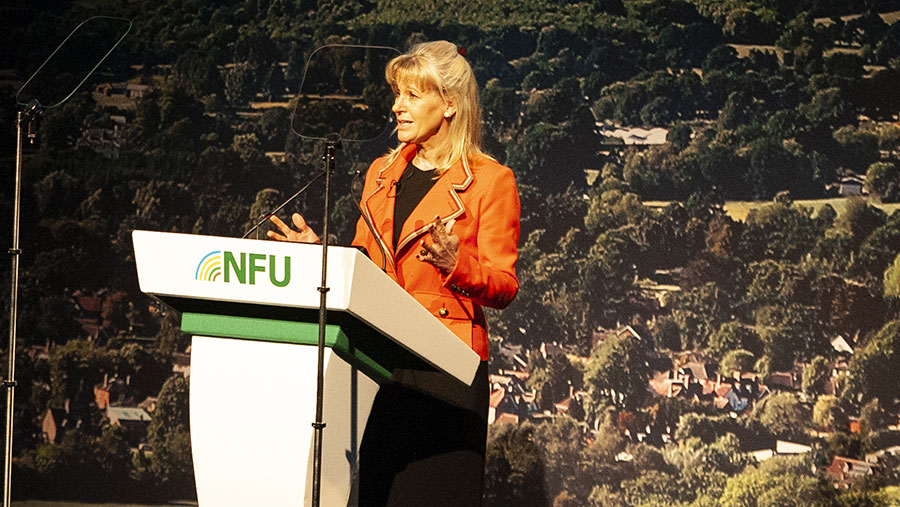 The farming industry needs “certainty, commitment and consistency” in government policy to avert future crises such as the “disaster” facing the pig industry, according to NFU president Minette Batters.

In her keynote speech to the annual NFU conference in Birmingham on Tuesday 22 February, Mrs Batters accused ministers of introducing “completely contradictory policies” on farming and warned the government risks “repeatedly running into crises” unless it changes.

She highlighted the crisis in the UK pig industry which has led to a backlog of 200,000 pigs on farms due to a labour shortage at abattoirs and 40,000 healthy pigs being unnecessary culled and their meat “simply thrown away”, which has added huge costs to pig farmers and seen 10% leave the industry.

“The pain and emotional anger from those pig farmers who feel utterly let down and abandoned is palpable,” Mrs Batters said. “Some are approaching debts of a million pounds now and every week it gets worse.”

“This is down to the government’s poorly designed change to immigration policy and what I can only say appears to be its total lack of understanding of how food production works and what it needs.”

Minette Batters has launched a new report at the NFU Conference – British farming: a blueprint for the future – to highlight five key areas the government, supply chain and farmers needs to prioritise. These include:

“It is raising the bar for environmental standards at home, but pursuing trade deals which support lower standards overseas.

“It is claiming to value domestic food production, but making it difficult to find workers to harvest or process it. It is stating there are many export opportunities for British food, but failing to prioritise the resources to open up those new markets.”

Mrs Batters warned the government that it urgently needed to implement a clear plan and vision for British farming and food production, or it risked wasting the huge potential of the country’s agriculture sector – and potentially sleepwalking into more crises.

“British farming has a lot to be positive about, to be proud of, and to believe in: our high standards of food production, our net-zero ambitions and our education programme which reached a third of a million children last year.

“But the government does need to understand that we need certainty, commitment and consistency.”

Mrs Batters said the eyes of the world were focused on the growing tension and potential war between Russia and Ukraine.

Yet while there was a cost-of-living crisis and an increasingly unstable world, the UK government “seemed to be entirely focused on anything other than domestic food production… with its ambition to set 30% of our land aside”.

Mrs Batters asked: “What’s the plan for the food we eat? Where will we get it and at what price?

“Are we turning a blind eye to the effect of global food production while we pursue a domestic vision of a chocolate-box countryside?”

Mrs Batters said the UK government must work with the farming industry to achieve the same objectives. She added: “There needs to be a plan. A plan that enables Britain to keep on farming and to continue to be world leaders in high-quality, safe and sustainable food.”

The conference is also set to hear from Defra secretary George Eustice.