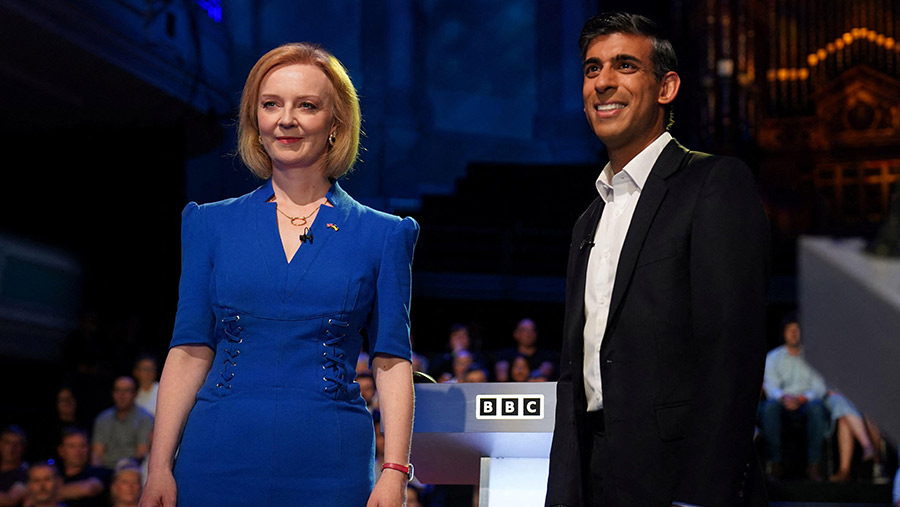 NFU president Minette Batters has written to Liz Truss and Rishi Sunak setting out a farmers’ “wish-list” for the next prime minister.

Maintaining current levels of food production and self-sufficiency, plus further refocusing of funding within the Agricultural Transition Plan towards sustainable food production, are among the priorities.

In the open letter to the two contenders battling it out for the Tory leadership, Mrs Batters also calls for a more “certain and predictable” regulatory environment, and a planning system enabling farms to boost productivity and help move the industry towards net-zero.

An immigration system that recognises agriculture and horticulture’s “specific needs and challenges” sourcing labour, along with an international trade strategy that raises food and drink exports and ensures existing high animal welfare and environmental standards in the UK are not undermined by lower-standard imports, are also on the list.

“I am confident that with the right policies and by working together, farmers can achieve so much for our country – not just by providing high quality and climate-friendly food, but also protecting and enhancing our environment,” she writes.

Meanwhile, speaking to Farmers Weekly, Mrs Batters said she hoped the arrival of a new leader could be an opportunity to ensure positive changes are made.

“We hope, more than anything, this is a reset moment,” she said.  “Our commitment will be there to work with both of them.”

The new prime minister, who will be announced on 5 September, will likely lead the Conservatives at the next general election – one in which the rural vote is likely to be a key battleground, she added.

As prominent MPs line up behind their preferred candidate, Defra secretary George Eustice has given his backing to Rishi Sunak.

In a letter to The Telegraph on Thursday 28 July, he said: “In 2016, I supported the campaign to leave the European Union. As the minister responsible for farming and fisheries, I spent my days with lawyers trooping into my office telling me what wasn’t possible because of EU law.

“The rulebook dumped on our farmers under the Common Agricultural Policy was all pervasive… it was stifling and I believed that we could do better for our country. Rishi believed so too.

“As a rural MP himself, Rishi gets farming and promised to be a champion for the causes of the countryside in his maiden speech.

However, Liz Truss is the firm favourite with bookmakers to become the next prime minister. She is prices as short as 1/4 in places to win the keys to Number 10.