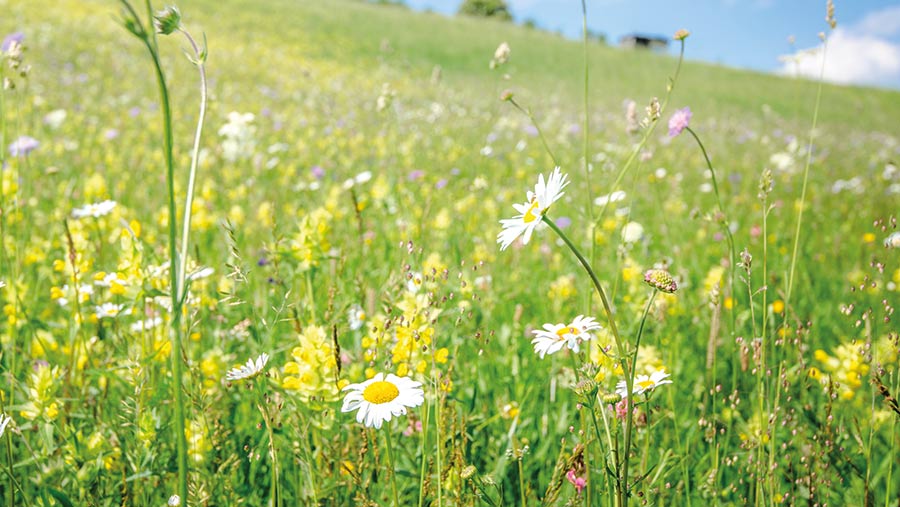 Farmers could soon earn money creating new habitats on their farms, as developers look to offset the loss of biodiversity resulting from development such as house building and infrastructure projects.

This demand is set to increase with the enactment of the  Environment Bill, along with increasing interest by corporate bodies looking to secure investor funding by becoming nature positive.

This year saw the launch of carbon trading by companies such as Soil Capital and Gentle Farming, which has seen interest from regenerative farmers.

And next year will see some growers start to earn money by improving biodiversity, taking poorer arable land and turning it into valuable nature habitats like species-rich meadows.

One organisation looking to offer biodiversity credits is The Environment Bank, which aims to create 100 new nature reserves over a three-year period.

For the right site it is offering 30-year guaranteed payments to farmers, which can help them fill the income gap left by the loss of BPS payments.

The organisation was established in 2006 by ecologist David Hill, an independent biodiversity consultant who has advised developers for many years.

However, he has become frustrated by seeing developers’ obligations for biodiversity not being enforced. They have focused on landscaping to make places attractive for house buyers, but with little value to nature, he says.

But this is set to change with the Environment Bill, which was recently passed in parliament, requiring developers to demonstrate a minimum 10% net gain in biodiversity. He believes this is where farmers will benefit.

For example, a 100ha housing scheme may typically have 2,800 houses and 20% open space. The land is surveyed and using the Defra 3.0 metric, it is allocated a biodiversity score.

So if the development scores 152 biodiversity units, the developer needs to add 10% and achieve a score of 167.

Prof Hill says that under the new law, developers will need to come up with a biodiversity gain plan and satisfy authorities it is being delivered such as by putting aside the 30 years of management funding.

The difficulty in achieving this within the development means he believes many will opt for buying biodiversity credits instead, once the need for transparency in the plan is realised.

It would work a bit like carbon credits, and this is where the Environment Bank comes in.

The organisation is currently building its bank, funding schemes of between 20ha and 100ha using the £200m of seed funding it received from an institutional investor.

He explains that the current model is based on the landowner being paid up front to create the habitat and then receiving payments for 30 years. The Environment Bank then raises credits from the habitat.

Prof Hill says the payments to farmers come to between £1m/ha and £1.5m for a 40ha site, covering the set-up costs and 30-year payments.

At this stage, the aim is to prove the concept, and he hopes to have a habitat in each planning authority in the next three to four years.

The bank is seeking farmers interested in getting involved. The habitats suit poorer arable land that is not especially nutrient rich.

This is ideal for creating a mosaic of woodland, grassland and other habitats to encourage wildlife.

Once accepted, the bank works with the farmer in creating the habitat and putting together a 30-year management contract, he says.

The bank’s experts have created protocols for creating the habitats. For example, when establishing a wildflower meadow, the starting point is to do phosphorus (P) and potassium (K) soil testing, says Prof Hill.

This will determine if “some austerity cropping is needed to strip nutrient levels down.”

The species mix will be tailored to the location and the habitat will need managing over the 30 years.

For example, once established, the farmer will need to take a first cut in late July and may do some light grazing afterwards to help seed distribution and keep it low.

These habitats will be monitored each year and this will be done by the bank, at its own expense.

Monitoring may include assessing populations of indicator species like yellow rattle, as it can help negate grass growth being a hemiparasite on grass roots. Otherwise, grass will rapidly overcome the flower species.

Every year, the bank will report on the habitat back to the planning authority.

Prof Hill says inspections will be light touch, with the focus on outcomes rather than being very prescriptive like some government schemes.

About 10,000ha is developed across the UK each year, which equates to 4,000ha annually for offsetting, and he believes the Environment Bank can supply half that area.

But he sees the real growth coming from big corporates like Google who want to demonstrate their nature-positive credentials in order to attract investment from fund managers.

The bank is planning for a launch in January 2022.