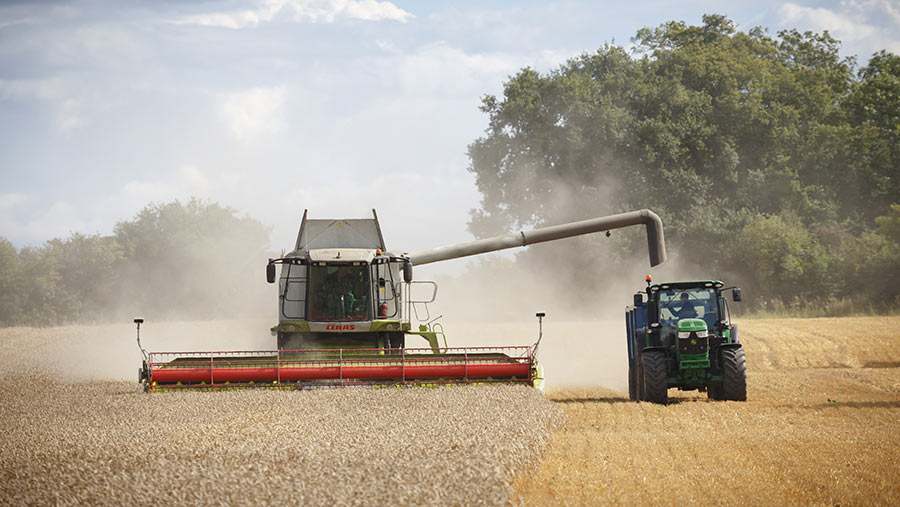 Forward-thinking farmers must be more efficient and sustainable to meet the multitude of challenges heading their way – including increased competition in a global market.

An increase in productivity is vital, say experts – a feat achieved by farmers and growers for the past 30 years, even if the UK’s growth rate has been slower than some overseas competitors’.

According to Defra figures, the total factor productivity (TFP) of agriculture has increased by 54.2% since 1973, driven by a 32.6% increase in the volume of outputs and a 14% fall in the volume of inputs.

However, the figures also show that since 2000, there has been a pattern of fluctuations. Factors such as unpredictable weather and disease outbreaks have a short-term effect on the figures, but the overall long-term trend is a slow but steady improvement.

Productivity – the rate at which inputs are converted into outputs – measures the efficiency of a farm business.

The first thing to understand is that this is not the same as production, says Derek Carless, AHDB head of farm economics.

“Where inputs such as labour, energy and water are being converted into tonnes of grain or litres of milk, for example, the productivity measurement shows how efficiently this is being done.”

This is important because the skill in running a successful farm business is to pinpoint the optimum level of output to the inputs used, says Mr Carless.

“Everyone knows that using more inputs is not always the best way to improve profit. It’s not as simple as just producing more, it’s about getting a better return.”

At the farm level, there are two ways to improve farm productivity.

“Either produce the same output with fewer inputs, or use the same inputs to produce more output.”

Measuring productivity is not difficult, says Mr Carless, with most of the information required being readily available in tax accounts or farm business software.

He notes that arable farmers will be used to looking at their costs of production in £/t, while livestock producers will be familiar with metrics such as gross margin a head and cost of production/kg.

“Don’t get hung up on any particular scale. Instead, look to see whether all parts of the business are profitable and get a thorough understanding of what’s going on.”

What can you do? Eight key traits common in top-performing farms

It’s also straightforward to compare your farm’s performance with others, either in benchmarking groups or by using the AHDB’s online farm business review tool.

Where more help is needed in improving productivity, there has also been support provided in the Future Farming Resilience Fund, which was launched last year.

Funds have been awarded to 19 organisations that are helping farmers identify what they need to do and how they need to adapt, in order to survive the transition period and beyond.

The latest figures from Defra show why some years are more challenging than others. Released last month, they reveal that TFP fell by 4.5% between 2019 and 2020, driven by a fall of 5.7% for outputs combined with a small decrease of 1.2% in the volume of inputs.

The drop can be explained by the very wet autumn of 2019, which saw crops left undrilled or failing to establish, and businesses having to accept lower yields. For those with livestock, a slight reduction in output was linked to Covid-19 restrictions and disruptions to markets. 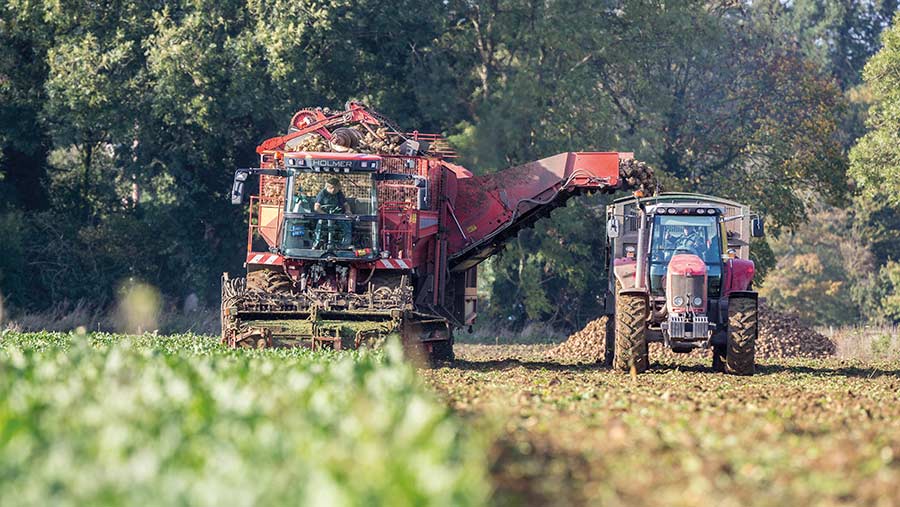 Market volatility is widely regarded as being here to stay, but when it comes to carbon management and reducing emissions, productivity has a central role in helping to make businesses more efficient, says Sarah Wynn of Adas.

“If you can produce more of the end product for the same or fewer inputs, you are improving productivity and doing your bit on emissions,” she explains.

Having animals on the farm for a shorter time, or using a feed additive, are examples of this in practice. Other ways include optimising fertiliser applications, making good use of genetics and protecting crop and animal health, as well as using the best land to produce more.

“Taking the marginal areas out of production allows you to farm for productivity and for nature or carbon,” she says. “It’s something that the emphasis on public money for public goods is encouraging.”

The next part of the Farming Investment Fund will see Defra awarding grants to pay for capital investments to improve farm productivity in England.

The application window is expected to open in mid-January, with grants covering up to 40% of the costs of a project.

As the funding aims to improve the efficiency of agricultural production, reduce environmental impact and encourage automation where labour is an issue, there are three main categories:

The minimum grant is £35,000 and the maximum is £500,000/theme, with the scheme open to farmers in England, as well as contractors that deliver agricultural or horticultural services.

That’s a view shared by Andrew Balmford of the University of Cambridge, who believes that farming should be as high-yielding as possible so it can be limited to relatively small areas, leaving the rest for biodiversity.

Having conducted a research review, he says we should concentrate farming to secure the highest levels of production we can from land, in order to spare the remaining areas as wilderness for species and carbon.

Prof Balmford points out that the bottom third of farmed land produces just 15% of English agricultural output and that 21% of farmed land in England will need to be rewilded or used for biofuel if the UK is to hit its net-zero targets.

“There’s a trade-off to be struck between crop production and biodiversity if we are going to meet future food targets. Increasing productivity in the right areas helps with this.”

Reducing crop establishment costs can help increase farm productivity – as long as it avoids a hefty reduction in yields.

Establishment costs range widely between farms, confirms an analysis of the 20 arable units that make up the Monitor Farm Network, which is co-ordinated by the AHDB. 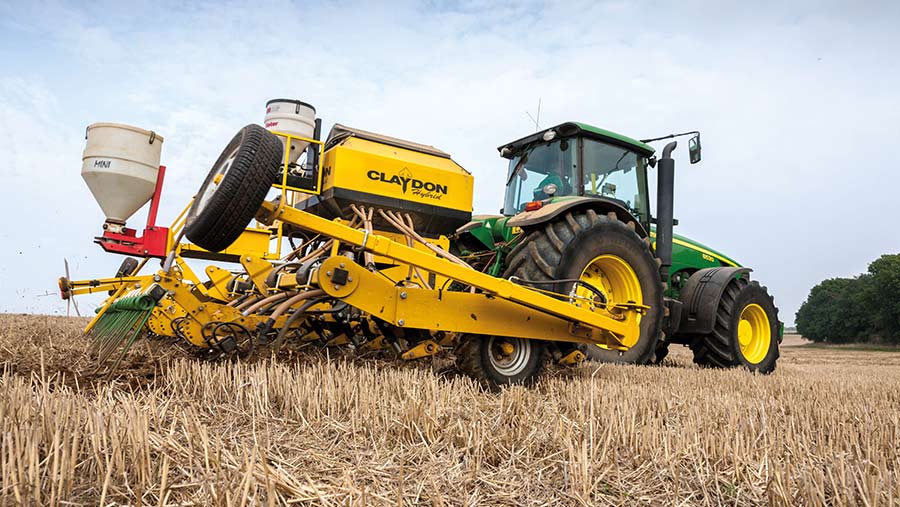 The highest crop establishment cost – an eye-watering £290/ha – included subsoiling, ploughing, pressing, cultivating, drilling and rolling. It achieved a winter wheat yield of about 10t/ha. Three other farms had costs higher than £200/ha.

“It’s a cheap, cheap system,” says Harry Henderson, AHDB arable farming and machinery specialist. A reduction in tillage doesn’t necessarily mean a reduction in yield, he adds. “Attention to detail is needed, but the farm is also achieving 10t/ha.”

Not everyone agrees. The alternative – land sharing – is a move to food production systems that work in harmony with nature, allowing both to co-exist.

That’s the premise of most regenerative agriculture systems, which have put soil health first and become less reliant on artificial inputs. Practitioners have accepted that environmental sustainability and nature recovery are key requirements for the future and are using diversity to deliver for biodiversity.

Figures from the Groundswell benchmarking group show what can be achieved – the latest results confirm that margins are maintained in regenerative systems, even where there is a yield dip.

Variable costs associated with a regenerative approach were 18% lower than those of a conventional system, while labour and machinery costs were 32% less.

With less capital tied up in variable costs and machinery, the net margin after labour and machinery was higher in a regenerative system at £27/ha, compared with a conventional system of £7/ha.

The Groundswell benchmarking exercise, which is co-ordinated by Gary Markham of LandFamilyBusiness, has led to a new key performance indicator for no-till systems – the average machinery capital per tonne of winter wheat. That currently stands at £74 for regenerative systems and £91 for conventional.

Eighteen-year-old Jack Thornton began taking on the 32ha farm near Preston, with a further 80ha of grazing land in the Lake District, after he left college – and he is working alongside his grandfather.

The farm runs 300-400 head of mainly Belgian Blue cattle, bought at the local market. They range in age from five months for turnout up to 26 months for fast turnaround finishing. 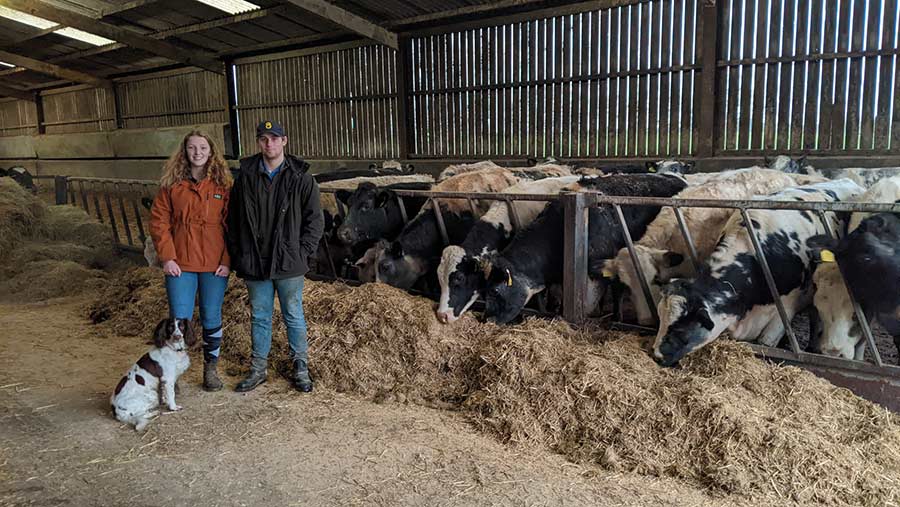 The farm used to have an issue with overweight cattle. “We cut down our overweights almost instantly,” he says. “The cost of the weighing system was about £1,000 and paid for itself with one load of cattle.” Cattle are also on farm for 25 days less on average.

In addition, Mr Thornton has cut concentrates and increased silage without negatively affecting daily liveweight gain; which averages 1.5-2kg. “As we are weighing, we know cattle are not growing less.”

Before using Breedr, cattle cost £20 a head a week to feed and were making £15/ week. Since using the app they are making £25 /week. The farm’s carbon footprint has also reduced, adds Mr Thornton.

“Cattle are being fed more efficiently and have fewer days alive, which reduces carbon footprint. At finishing, cattle are producing 9kg of carbon dioxide equivalent an animal a day – equivalent to 225kg an animal during the time it is on the farm.”