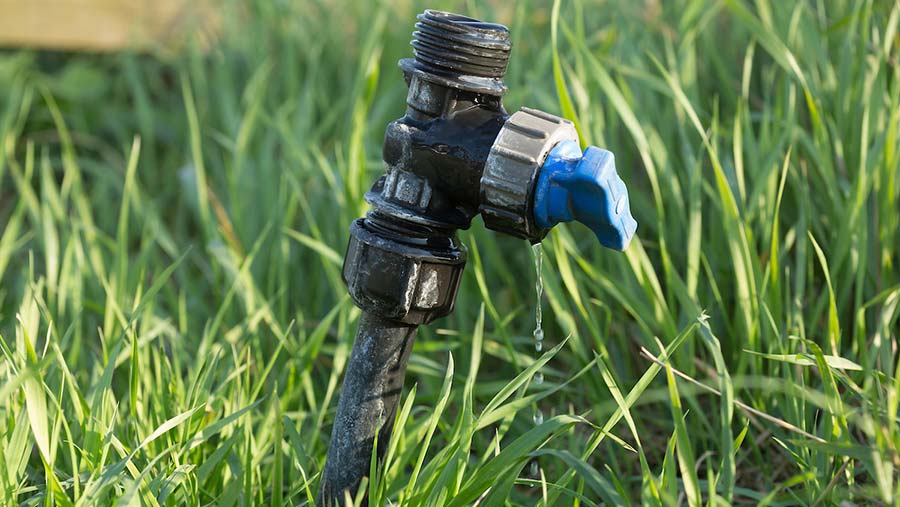 Farmers in the south of England are challenging a decision by one of Britain’s largest water retailers to seek payments in advance of the delivery of their water services.

Thousands of business customers, including farmers, had their water accounts automatically transferred from Thames Water and Portsmouth Water, to Castle Water in April 2017, as part of a shake-up following the deregulation of the water market for business users.

Farmers say they object to the fact they are now being asked by Castle Water to pay for some of the water they use in advance.

See also: Reforms to give farmers choice of water provider

Paul Hammett, NFU water specialist, said since the water retail market had opened up last year, business users across the country have experienced a variety of billing issues, such as invoices based on missing or inaccurate water usage data.

However, the decision by Castle Water to change its billing to advance payments was proving a step too far for the farming community.

“The principle of advance billing has gone down really badly with farmers,” said Mr Hammett, who took a delegation of farmers to meet the water retailer last week to discuss the issue.

“As small businesses, cashflow is really important. Their consumption of mains water can be quite variable and they don’t want to be billed for water they have not yet used.”

John Reynolds, chief executive of Castle Water, told Farmers Weekly that the company had a good track record of working with farmers – for example, partnering with NFU Scotland to offer an affinity deal that had led to savings on water bills.

As a water retailer, the company itself was charged in advance for the services provided by its wholesaler, which include supplying water, taking waste water away and maintaining the infrastructure to deliver supplies.

Customers were not being asked to pay for all their water in advance, but were sent a bill midway through a six-month billing period, covering three months in arrears and three in advance.

“Our payments terms are designed to be fair and are working capital neutral and should be seen in the context that we are paying all the charges in advance,” he said.

However, Mr Reynolds added that any farmers unhappy with this option could choose to move to a pay-as-you-go tariff, which gives customers the chance to choose their own billing period and submit their own meter readings.

“That should resolve these specific concerns,” he said.

The opening up of the retail market for water was designed to give farmers choice about their supplier, so if farmers don’t like the price or service they are being offered they can switch to another provider.

As far as the NFU is aware, Castle Water is the only water retailer to be implementing advance billing.

However, “teething problems” with billing are occurring with a range of providers.

Farmers who want to dispute their bills are advised to make sure it is properly logged with the retailer in question, double-checking that it is going through the official complaints handling procedure.

It is also important to log a dispute correctly as it should put any potential debt recovery proceedings on hold.

The Consumer Council for Water will also require customers to have followed their supplier’s official complaints procedures before being willing to investigate any dispute.