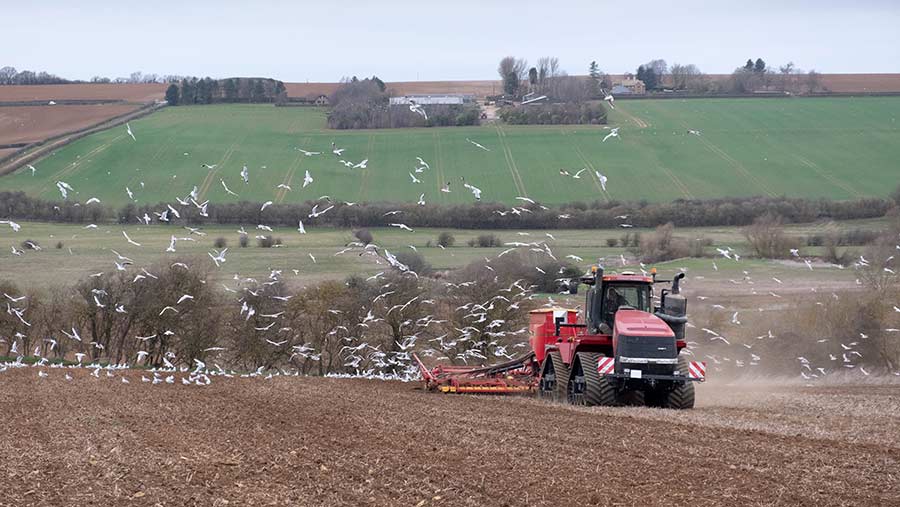 Rejection of prime minister Theresa May’s withdrawal agreement by MPs earlier this week, and the subsequent vote on Thursday (14 March) to extend Article 50, has prolonged the uncertainty surrounding the terms of the UK’s departure from the European Union.

For even though MPs have also voted to reject crashing out of the EU on 29 March without a deal, the EU is not guaranteed to grant an extension to Article 50. And if it does not, then the default position is still for the UK to leave without a deal.

See also: Find all our Brexit news and analysis in one place

To try to make sense of the permutations, farm business consultant Andersons has been weighing up the likely effect of various scenarios on its model farms over the next 10 years.

In the combinable crops sector, Andersons uses its Loam Farm model – a hypothetical farm comprising 600ha in a rotation of milling wheat, oilseed rape, feed wheat and spring beans, based on real-life data.

Forecasts for the coming harvest suggest the farm will achieve an output of £1,283/ha, which will deliver a production margin of £77/ha once variable costs, overheads, rent, finance and drawings have been deducted.

Adding subsidy payments of £221/ha back in takes the overall business surplus up to £298/ha – equivalent to £178,800 for the whole enterprise.

In all three post-Brexit scenarios, Andersons predicts a substantial decline in profitability, though for different reasons.

In the “withdrawal deal” scenario (which we now know is not going to happen in its current form following this week’s vote, but still represents the “softer” Brexit option which now seems more likely), output is fairly stable, but costs start to creep upwards.

The biggest effect, however, comes from the cut in subsidies, which Andersons estimates could halve over the next 10 years (see “Change in domestic support post-Brexit” below). To some extent, this will be offset by lower rents as the reduced subsidy weakens the value of land. Andersons suggests that about half the subsidy reduction will feed through in this way.

Despite this, the projected business surplus is still lower at £219/ha compared with £298/ha forecast for 2019.

Not surprisingly, the financial picture is worse still with “no deal” – even under the “Fortress UK” scenario, where tariffs are imposed on imports, giving the local grain market a lift. This benefit is outweighed by the effect of tariffs on both variable and overhead costs, which suppress profits.

The worst effect on Loam Farm, however, comes from a so-called “Singapore-on-Thames” no-deal Brexit, which leaves the UK competing with the lowest-cost producers around the world, pushing down output values far more than any cost savings.

Friesian Farm is the model farm prepared by Andersons to assess the effect of Brexit on milk producers – and here the picture is even more mixed than for cereal growers.

The farm is a notional 200 cows plus followers unit, with year-round calving, a contract based on “milk constituents” and an emphasis on maximising yield from forage.

For the 2019-20 milk year, the consultants predict a production margin of 2.2p/litre based on a milk price of 28.5p/litre. This is boosted to a 4p/litre business surplus, once direct payments worth 1.8p/litre are added in, giving the farm a projected profit of £62,800 based on an average yield of 7,850 litres a cow.

Should a compromise withdrawal deal finally be accepted, then that business surplus would fall to 2.7p/litre (or £42,000 for the farm), largely as a result of subsidies halving over the next 10 years, and a slight fall in milk prices due to “trade friction” from being outside the Single Market.

Perhaps surprisingly, Friesian Farm is shown to benefit from a “no-deal, fortress UK” scenario in which tariffs are imposed, partly as a result of higher prices (to almost 30p/litre) as imports become more expensive. The halving of subsidies also results in lower rents too, which helps the bottom line.

But under a free-trading “Singapore”-type Brexit, this farm makes a loss, even after subsidy, as a result of lower prices (New Zealand butter and Irish Cheese would look very cheap), which would outweigh any cost savings.

Andersons has also done a similar analysis for the lowland grazing livestock sector and for the pig sector.

For beef and sheep farms, the Brexit effects are significant because these types of businesses are currently so reliant on direct payments. As these are phased out, Andersons’ typical farm moves from a business surplus to a loss-making position – with or without a withdrawal deal.

As such, the consultants say lowland livestock producers need to make greater use of grass to stay profitable, much as the dairy sector has done already.

The pig sector, while seeming to be less “supported” than other parts of UK farming, actually enjoys significant protection in the form of tariffs. Profits could rise further under a “fortress UK” no-deal scenario as imports become more expensive. But under a “Singapore-type arrangement”, the sector is hit hard by cheap global imports and sinks into the red.

“Any sort of Brexit – deal or no deal – will result in the UK leaving the CAP,” says Andersons head of business research Richard King.

“Without this framework, there will be more divergence in farm policy between the different parts of the UK, as agricultural policy will remain a devolved matter.”

The greatest challenge, however, will be the level of funding available, as Defra – and quite possibly the other administrations – start to phase out direct payments to farmers and introduce new systems based on farmers’ delivery of public goods, such as environmental improvement.

Initially, such deductions will help pay for new environmental schemes, but in the longer term, the fear is that politicians will seek to “raid” farm funding for other purposes, and the total pot will shrink.

“Once we are competing with sectors like education, health or the armed forces, it will be hard to maintain current funding levels,” says Mr King.

Andersons believes that total subsidies for agriculture could shrink by 50-60% in real terms by 2030 – “this feels like where we might be going” – and farmers will have to do more, and incur more costs, to receive it.

“Unlike BPS, which farmers basically have to fill out the paperwork to secure, once we move to an Environmental Land Management System, they will have to do much more, incurring costs and so reducing the profit element,” says Mr King.

What do the best do?

* The above analysis was presented to the first Andersons spring seminar at the RAF Club in London on Friday (15 March). Further seminars are timetabled in March. See www.andersonscentre.co.uk/seminars