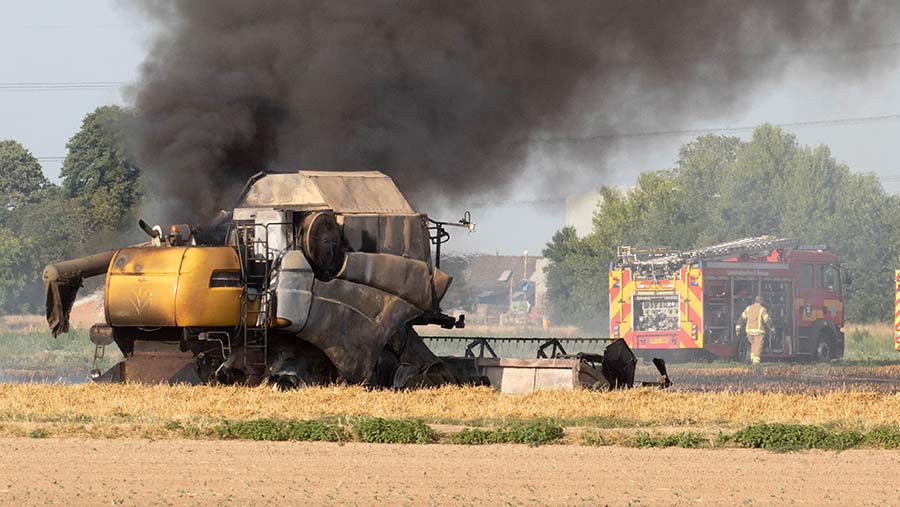 Force majeure clauses in farm contracts should be checked in light of recent weather conditions, as the hot dry weather is affecting farmers’ ability to meet the requirements to deliver potato, carrot and other root crops, as well as grain, milk and maize.

Any force majeure clause needs to be read carefully to see what is covered, what is not and, importantly, whether an affected party needs to take any steps in order to benefit from its provisions, says lawyer Julie Robinson, a partner with Roythornes.

However, force majeure is often misunderstood as being a means of getting out of a contract.

Force majeure – what does it mean?

Including a force majeure provision in a contract is a way for parties to manage risk.

The parties are agreeing that if certain kinds of events happen which are outside a party’s control, that party is freed from its obligation to deliver on all or part of its side of the deal. The other party cannot then claim damages for non-performance.

Many contracts to supply farm produce contain a force majeure clause but these vary. Such clauses will sometimes specify what constitutes a force majeure event, while others will be vague.

There is no English standard definition of force majeure, so each contract must be examined carefully to understand what the term covers.

Often a period of time is specified, allowing a party to address the impact of an unforeseen event that made performance of the contract impossible within its original terms.

See also: How to resolve commercial disputes and keep costs down

The implications of using a force majeure clause depend very much on the individual contract terms, warns Ms Robinson.

Those terms will often put the onus on the party affected to notify the other promptly or immediately if an event covered by the clause occurs and to act reasonably in trying to limit or mitigate the effect of the event. Some contracts require parties to take precautions to avoid the event.

One of the most commonly used ex-farm buying contracts is the AIC Grain/Pulses No 1/16 producer/first buyer contract.

Force Majeure: Neither the buyer nor the seller shall be responsible for delay in delivery of goods or any part thereof occasioned by any act of God, action by any government, strike (including dock and/or shipping strikes within the United Kingdom), lock-out, combination of workmen, break-down of machinery, power failure or fire, provided that the party invoking this clause despatches written notice to the other party within five business days of the occurrence, or not later than five business days after the beginning of the contract period, whichever is the later.

Unless otherwise mutually agreed, the party invoking Force Majeure is entitled to an extension (the first extension) of not more than 30 consecutive days from the end of the contract period.

If delivery under this clause is still prevented at the end of the first extension period, the party not invoking the clause shall have the option of cancelling the contract or any unfulfilled part thereof or mutually agreeing to one further extension period (the second extension) of not more than 30 days.

If at the conclusion of the second extension period delivery is still prevented, the contract or any unfulfilled part thereof shall be cancelled.

Consignment: Each delivery or consignment shall stand as a separate contract.

“This force majeure clause is narrow, and not ‘inclusive’,” says Ms Robinson. “The events listed are not examples of force majeure; they are the grounds on which a notice can be served and deliveries can be delayed or cancelled without penalty.

“That said, the grounds include ‘act of God’. The key question is whether prolonged hot, dry weather, or a single incident like a hailstorm, which destroys a crop, are accepted as acts of God in a crop production context.

“It is unlikely that a period of unseasonal hot weather will, of itself, fall into this category.

“Even if your reliance on force majeure is accepted by your buyer, this clause only serves initially to delay your performance by up to 60 days, giving you time to get the combine repaired or for you to source from elsewhere to meet your delivery commitment.”

The failure of your own crop due to an act of God may not be sufficient reason if you can buy in crop from other parts of the UK.

1. The crop does not have to be produced on your own farm as long as it is produced in the UK.

2. Each delivery is treated as a separate contract (one period’s delivery may be cancelled without penalty if the clause is engaged, rather than the whole contract amount).

3. Quantity tolerances may apply (+/- 5% compared with the contracted amount or 15 tonnes, whichever is less).

4. The ‘force majeure’ events are expressly listed. They are not examples, but acts of God are on the list.

5. Notice must be served if you want to rely on the force majeure clause, and for each delivery affected.

6. The initial focus of the force majeure clause is to give you time to perform your contract – you may have up to 60 days to get the combine repaired/solve power issues/source crop from other farms.

7. Your contractual obligation is only cancelled if delivery is still impossible after the time extensions set out in the clause or if your buyer agrees to earlier cancellation.

8. Your buyer may require evidence demonstrating why delivery was delayed or impossible.

A very different force majeure clause applies in some potato supply contracts and the contrast serves to show why a whole contract needs to be read very carefully, says Ms Robinson.

The potato force majeure clause states: “Neither party shall be deemed to be in breach… or otherwise liable to the other party… for any failure or delay in performing its obligations due to circumstances beyond the reasonable control of that party including, without limitation, acts of God… war or national emergency… fire, explosion, flood, epidemic.”

“This force majeure clause is helpful,” says Ms Robinson. “The list of events is not exclusive; they are examples of the kind of things that constitute ‘circumstances beyond the reasonable control’ of a party. Serious weather conditions such as drought are not mentioned explicitly, but we would argue that they fall within the spirit and the letter of the provision.”

The clause is, however, followed by a condition: ‘A party who intends to rely on an event within the above clause should give notice in writing to the other party within one month of that event first occurring’.

It is crucial that this notice is served if a grower is to have a chance of relying on the clause.

There is also a proviso in the force majeure clause itself: ‘This shall not affect the buyer’s right to reject the crop, or part of it, on the grounds set out in clause X.’

The grounds referred to in this contract are the crop being damaged (eg by bruising or scab) or outside agreed tolerances (eg in relation to dry matter or tuber count). In other words, if a crop is delivered but – despite irrigation – is affected by common scab, the existence of a force majeure event does not get growers off the hook in relation to the scab; they will remain bound by what the contract stipulates about the consequences of rejection.

It is fairly common for a buyer to use a standard contract like the AIC No1 contract but then to override certain of its terms with the buyer’s own terms, often issued annually.

For example, some grain merchants operate different weight tolerances for over and under delivery compared with those in the AIC No 1/16 contract. Others reserve the right to extend the contract period.

So, when agreeing a contract, ask for a copy of the buyer’s terms of trade in writing.