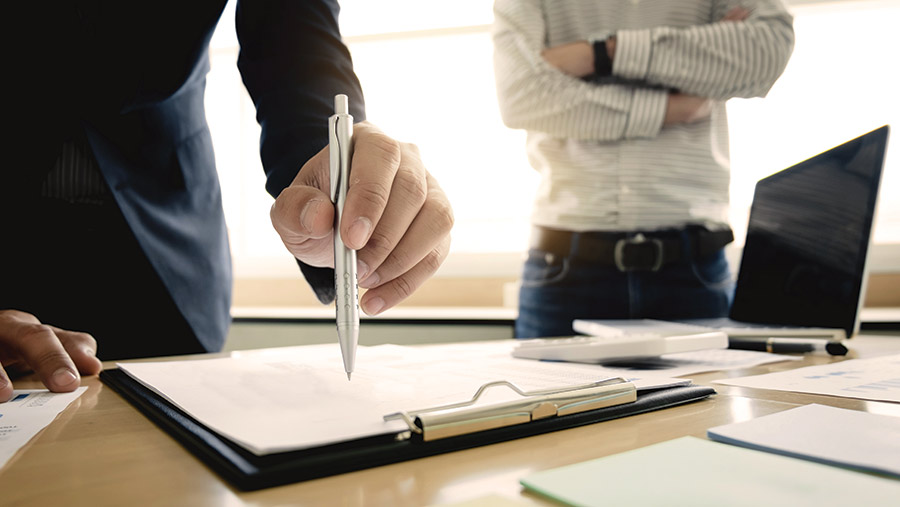 All too quickly and far too often, disputes over the supply of basic commercial goods like equipment, feed, seed and fertiliser unnecessarily wind up in a protracted court case that neither party can afford to lose.

It is a high risk strategy. Once you start the process of court litigation you are a passenger on a potentially ruinously expensive train, says Mr Matthews.

However, it is possible to retain a greater degree of control by avoiding the courts and following more creative legal avenues at an earlier stage in a dispute, he says.

But firstly, it is worth asking whether even the best legal outcome is worth the risk in financial and other costs.

If a claim totals less than £10,000 it is subject to a different set of rules to a higher value case, explains Birketts senior associate Robert Tiffen.

The most significant of these rules is that the successful party will not recover their legal costs from the unsuccessful party. So engaging lawyers in a small claim is almost certainly uneconomic.

Mr Tiffen says the un-costed time consumed should also be taken into account. Farming involves a relatively small community of connected businesses and a court action can be a divisive measure, he says.

The unattractiveness of formal court proceedings has led lawyers to develop a variety of ways in which legal disputes can be resolved without going anywhere near the courts.

Arbitration involves the private determination of a legal dispute by a suitably qualified individual or panel.

The AIC rules control costs by streamlining the process and prohibiting the parties from engaging lawyers.

Mediation is assisted negotiation using a neutral mediator to help the parties find common ground and the basis for the resolution of a dispute.

Disputes that historically would have either gone to court or resulted in a last-minute settlement are frequently resolved at an early stage by the mediation process.

Mediation is confidential and, unlike litigation, controlled by the parties in dispute.

Cases are 75% successful and can produce results that sustain rather than damage important trading relationships.

Commercial mediations usually involve the parties, their legal advisers and a neutral mediator. The mediator’s costs are usually shared equally and will be around £2,500 a day.

The difference is that expert determination usually involves a narrow issue that requires expert opinion to resolve.

It usually involves a streamlined process and limited cost. Parties will often find it easier to accept the opinion of a qualified neutral than to negotiate a compromise.

Most businesses will try to take out insurance against the risks of claims being made if things go wrong.

However, once a claim is made on the policy, control of the dispute passes to the insurer.

Mr Matthews warns against reliance on an insurance policy where this can result in damaging important trading relationships in which the insurer will have no interest.

A business may be lucky and never become embroiled in a legal dispute. However, there are simple steps that can be taken to establish a stronger position should a dispute arise.

Keeping records of instructions, transactions and agreements is of paramount importance.  Being right is not good enough when the legal process is engaged.

A claimant has to prove they are right and documents will achieve that more effectively than any other kind of evidence.

Frequently a case is won simply by having a better paper trail to back up a claim than the one offered by the opponent.

Contemporaneous notes which have been recorded at the point of a key incident, like a decision change or instruction, can be invaluable in proving a case.

This is now easier than ever with the technology available to send emails, take photographs and record videos.

It is extremely useful to send an email to record an instruction to a commercial party and have them affirm the content by reply. It provides a valuable chronology and an acknowledgment.

If there is not an email system available, simple paperwork can still strengthen a future claim.

While it is possible to improve the chances of winning a dispute, modern technology can also be a liability.

Texts, personal emails or social media statements all have to be disclosed in the course of formal proceedings.

We all leave a considerable data trail behind us. This is usually all retrievable and not always helpful.

Finally, there are the third party funders. These are investors with substantial funds at their disposal who will agree to fund the costs of taking a case to trial in return for a proportion of the sum recovered if the case is successful.

There is a burgeoning market in litigation funding so where there is a substantial claim with good prospects against a solvent defendant, a claimant will not find it difficult to find financial support for the costs of pursuing it.

Holding the best documentation trail is a common theme in successful cases handled by Birketts.

Disputes over poor quality feed are common and notoriously difficult to resolve.

The cause can be difficult to isolate which means a long and expensive battle if the dispute goes to court.

One case handled by Birketts surrounded rhinotracheitis in turkeys that caused reduced growth and mortality.

The turkey producer blamed the feed company for supplying a dusty batch of food which had caused respiratory irritation and led to infection.

The case involved forensic detective work using veterinary expert witnesses to establish how the feed was at fault.

The turkey company had diligent husbandry records that pointed to a dramatic change after the dusty feed was introduced.

Rather than head for court, Birkett’s enlisted veterinary experts while the feed company employed their own.

A resolution was agreed and the feed firm paid compensation, saving both sides thousands of pounds in legal bills.

An AD plant withheld £250,000 of payments to a farmer after it claimed a contract to supply sugar beet had been breached.

The company claimed that a failure to meet agreed harvest dates and storage clamp conditions had compromised the crop’s quality.

The following legal argument was won because the farmer had a robust paper trail. Birketts opened up settlement negotiations and initiated without-prejudice discussions which allowed all paperwork and communication to be viewed and assessed.

Although the farm had harvested the crop earlier than initially agreed, the change had been documented and more importantly acknowledged by the AD firm.

Both parties agreed on a settlement slightly under the original claim and proceedings were never issued.

Disputes over fertiliser quality occur frequently. The issue with fertiliser disputes is that there is a long supply chain from the manufacturer, importer, wholesaler and distributor before the product reaches the farm.

Because fertiliser draws in moisture it can be compromised at any stage in this journey including during storage on-farm.

Birketts has handled numerous cases where farmers have alleged that the fertiliser is faulty. But it is difficult to prove where the problem has arisen and court battles are to be avoided.

These frequently become complex disputes because there are commonly four parties involved – the manufacturer, the seller, the finance company and the user.

Each party has its own agenda and if it enters the court it can result in a multiplication of the legal bill for the loser.

It is common for legal costs to reach £100,000 for each party, and the losing business must then bear a £400,000 total cost. Birketts represented a distributor in a case over a drill which ended up in an expensive court battle that went against the farmer’s claim.