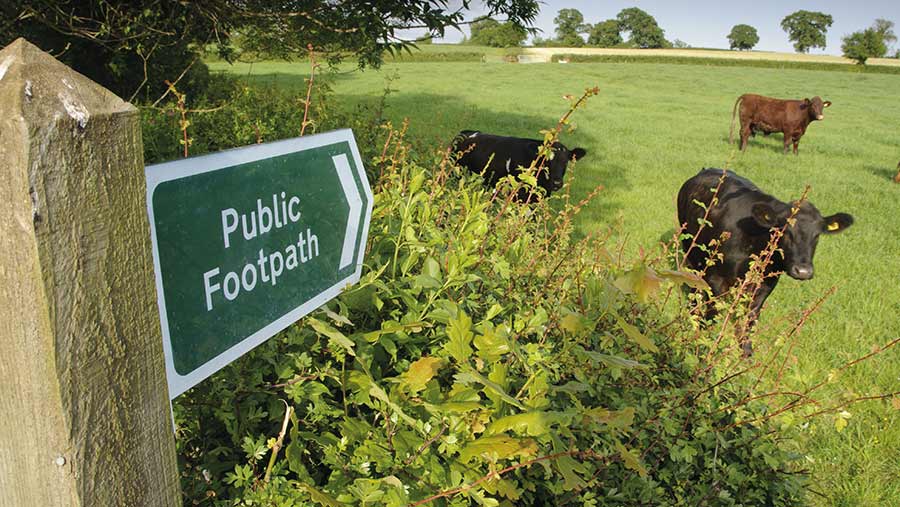 Farmers turning out cattle this spring are being warned to think twice before putting cows and calves in fields with public footpaths.

It follows a spate of incidents involving walkers with dogs being attacked by cows protecting their offspring – a risk expected to rise as visitors to the countryside increase as coronavirus restrictions are eased.

Richard Stockdale, who farms in the Yorkshire Dales, said he had already stopped keeping cows and calves in fields with public access.

See also: Tips on staying legal with cattle near footpaths

“More people are using footpaths and we’ve had to change our attitude because of it,” he said (see “Serious accident prompts rethink on cattle”, below).

At least three people have been killed by cows while walking in the countryside since last summer.

The deaths have contributed to a rise in farm fatalities to be confirmed when the Health and Safety Executive (HSE) publishes its annual accident statistics in the coming weeks.

HSE lead on livestock policy Stephen Britton said: “We want farmers to think about where they are going to keep livestock – where they have fields without any public rights of way, that is the first place you want to keep them during busy times.”

They should also prioritise putting cattle in quieter fields with the least busy rights of ways.

In the event of a person being injured or killed, Dr Britton said farmers who hadn’t taken reasonable steps to monitor the behaviour of their cattle or segregate their livestock could find themselves with civil claims and potential enforcement action.

Guidance describing the hazards associated with keeping newly calved cows in fields with public access – and how to control them – is contained in HSE information sheets AIS 17EW (England and Wales) and 17S (Scotland).

Farm leaders say the guidance could save lives. Country Land and Business Association (CLA) deputy president Mark Tufnell said: “With many cattle about to be turned out this spring, it is vital that farmers and landowners take advice from the HSE.”

The CLA and NFU have been campaigning for the law to be changed, so farmers can temporarily divert footpaths to reduce the risk of serious injuries to walkers, to allow them to operate their businesses safely and effectively.

But The Ramblers organisation argues that diverting footpaths risks preventing and discouraging access to the countryside at a time when it has never been more important.

Rather than legislation, ramblers want more focus on the steps that can be taken by farmers to improve public safety, including not keeping cattle in fields with public access, especially when cows are calving or have calves at foot.

Two incidents involving walkers prompted beef and sheep producer Richard Stockdale to change where he keeps cattle on the farm.

Mr Stockdale, who farms at Wharfedale in the Yorkshire Dales National Park, said cows with calves were no longer kept in fields with footpaths.

Some paths had been fenced off and some fields had been made inaccessible for cattle, he added.

“We’re quite a split-up farm, with different packets of land, and we’ve had incidents in the past with walkers with dogs being injured by cows protecting their calves,” Mr Stockdale told Farmers Weekly.

The worst incident saw a woman airlifted to hospital after she was badly injured by cattle.

Mr Stockdale said it prompted a thorough risk assessment and review of the farm’s safety policy relating to the public and livestock.

“We might put bulling heifers on or bullocks – but we feel that the risk doesn’t warrant having any cows and calves on footpaths any more,” said Mr Stockdale.

“We think about it quite seriously now.”