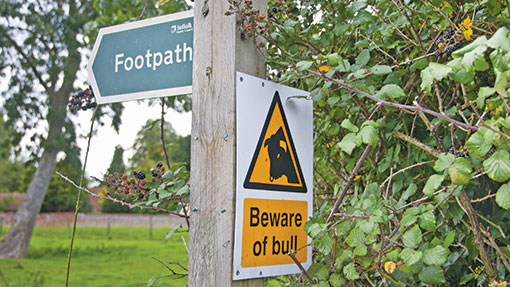 Having cattle in fields that contain footpaths can pose a danger to ramblers.

The animals may not be aggressive but at calving, cows can become protective of their calves and cattle can naturally be curious, particularly if dogs are in tow.

But what are the rules for bulls and cows in fields with public access?

Andrew Gillett, a legal adviser at the CLA, answers some frequently asked questions to help ensure you are not falling foul of the law in case an accident does happen.

Which breeds of bull are legally not allowed in fields crossed by footpaths?

The general rule set out in statute is that it is an offence to allow a bull in a field crossed by a public right of way, but there are exceptions to this.

No offence will be committed if either: the bull in question is under 10 months old or it does not belong to a recognised dairy breed and is at large in any field or enclosure in which cows or heifers are also at large.

A dairy breed defined by the act is one of the following: Ayrshire, British Friesian, British Holstein, Dairy Shorthorn, Guernsey, Jersey and Kerry.

Do farmers have to put up warning signs for walkers?

It is good practice to display signs informing the public that there is a bull in the field.

The Health and Safety Executive (HSE) advises that a suitable sign would be triangular with a yellow background and a black band around the outside with a bulls head in yellow or black on the sign.

It is best to keep the wording on the sign simple such as “bull in field”, wording such as “danger” or “beware” could be seen as evidence that you thought the bull was dangerous.

It is also important that the sign is only up while the bull is in that field, otherwise it could be interpreted as a misleading statement that might deter the public from using the right of way, which itself can be an offence.

If warning signs are present, does this mean walkers enter at their own risk and farmers have no liability?

Although it is certainly good practice, a sign does not remove all potential liability.

Liability in these matters is a complicated area of the law, the level of liability you owe the person accessing your land depends on the reason they are there.

For instance, are they a visitor or a trespasser, or are they validly using a public right of way or access land? It is further complicated as there are a number of key areas of law involved.

If you know an animal is particularly aggressive, should farmers avoid putting it in fields with public access?

A HSE advice is that you should not keep a bull that is known to be dangerous or unpredictable in a field with a public right of way.

Where land is limited, fencing can be used to keep cattle and bulls away from the public right of way.

These can be permanent or temporary in nature, but you should be careful when placing these so as not to obstruct the right of way, as this is an offence.

Fencing needs to be strong enough to be stockproof, and if electric fencing is used, you should put warning signs 50-100m apart.

What are the rules regarding cows in fields with footpaths?

With cattle rather than bulls it is a matter of following best practice. Where possible, cows that are calving or which have calves at foot should be kept away from fields crossed by the public; again temporary fencing can be considered where this is not feasible.

It can be helpful to make sure the public rights of way are well waymarked and unobstructed to avoid people wandering off the correct route and into areas of danger.

Finally, it is imperative to have the appropriate public liability insurance in place.

What is the advice to farmers with rights of way running along cow tracks used to herd and move cows?

Where livestock are being driven on land to which the public have access, the farmer must do all they can to prevent it causing damage to footpath users.

In general, if they are not under sufficient control to prevent them causing injury to other users then this could amount to negligence.

Make sure that you have sufficient people to handle the animals and that they are competent and agile. Where an animal is regularly aggressive or difficult to handle, consider culling it from the herd.

At what point is a male calf still on its mother in a field a potential problem?

It would not be an offence provided the calf was under 10 months of age, or older provided it was not a recognised dairy breed and was kept with cows or heifers who were also at large.

Even so, the HSE guidance is that cows with calves at foot should be kept out of fields with public access where possible.

Consideration should be given as to how keeping the calves with the herd is likely to effect their behaviour.