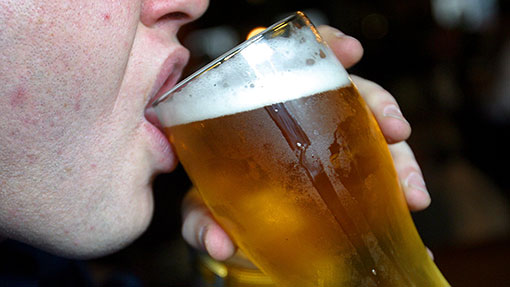 Youngsters are putting their lives and the reputation of the farming industry at stake by taking foolish risks as part of a social media drinking game called Neknominate.

The craze, which started in Australia, has been spreading across the internet over the past couple of weeks.

The aim of the game is to complete a drinking dare – downing a drink in a silly situation – and then nominate someone to do the same.

Dares are recorded and the videos are posted on social media sites such as Facebook and Twitter, where the person names the next person they want to see complete the challenge.

The game is not restricted to people from a farming background, but there is concern among farm leaders about the way some young farmers have filmed themselves in dangerous situations.

While many young farmers have filmed harmless and fun Neknominate videos, others have filmed themselves with farm machinery in situations where accidents could easily happen.

Others have chosen to drink hideous concoctions with concerns being raised about the health implications of consuming products not meant for human consumption.

A farmer from South Wales who asked not to be named said he had heard of people seemingly drinking sheep afterbirth mixed with a pint of beer. Another appeared to show someone downing a lambing tonic.

“I am concerned somebody is going to do something really stupid and poison themselves. If the sheep had toxoplasmosis then it could make someone really ill and drinking stuff not meant for the human body is risky.”

Dr Helen Ferrier, NFU chief science and regulatory affairs adviser, said the popularity of such a dangerous activity was worrying.

“For the NFU, farm safety is of critical importance and we work extremely hard to promote safe behaviour on farm.

“Farms are not playgrounds and games like this put lives at risk.“

The National Federation of Young Farmers’ Clubs said it had written to all members to ask them to make sure anyone who got involved thought about the consequences.

“While this is not an activity related to Young Farmers’ Clubs, we are concerned that members may be tempted to get involved, not thinking about the consequences – not only for their personal safety but also to their reputation and that of the wider industry.

“NFYFC is an active member of the Farm Safety Partnership and offers guidance and training to our members on farm safety. We have sent out guidelines and information to our members and county organisers about Neknominate and many of our members are also concerned about the activity and are speaking to their clubs about it.”

The NFYFC has pointed out that posting irresponsible videos in the public domain could affect members’ future prospects as they can be viewed by potential employers, colleges and universities.

Drinking while operating machinery or driving was also extremely dangerous, illegal and was not condoned by NFYFC or the Farm Safety Partnership.

Anyone choosing to take part did so of their own volition and should not associate YFC or NFYFC in their activities. Under 18s should also not be nominated to take part, it added.

Any concerned YFC members can contact the youthwork officer Cath Sykes on 02476 857 200 or email cath.sykes@nfyfc.org.uk