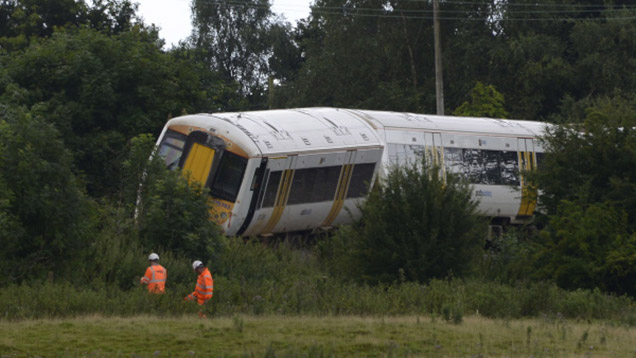 A passenger train has been derailed after hitting and killing five cows on a main line in Kent.

The front two carriages of the 10.10pm from London Charing Cross to Ramsgate service came off the tracks between Wye and Chilham on Sunday 26 July.

There were no injuries to passengers but 65 were helped to safety.

British Transport Police has launched an investigation into the collision.

A police spokesman said because the investigation had begun it could not release details of who owned the cows.

Kent Fire and Rescue Service said it believed the livestock had strayed on to the railway, shortly after 9.30pm on Sunday.

It sent four vehicles to the scene and helped to evacuate passengers and train staff.

The railway line will remain closed for two days while the investigation, clear-up operation and recovery are completed, according to Network Rail.