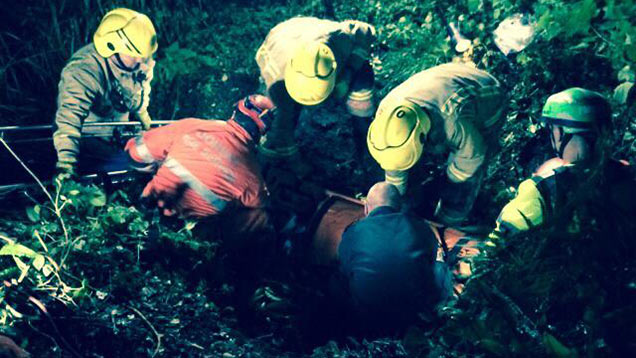 Firefighters carried out a dramatic rescue after a farmer was thrown from a tractor when it plunged 25m down a hill.

Dorset Fire and Rescue Service were called to the incident shortly before 10.30pm on Monday (6 July).

Three fire crews from Bridport and Beaminster and a rescue team from Weymouth were scrambled to the incident in South Bowood, near Bridport.

They found the man had rolled the tractor down a steep hill near Waytown and been thrown from the cab into a 20ft ditch.

Emergency teams made the area safe and climbed down into the ditch.

Using specialist ropes, the crews plucked the man from the ditch and carried him up the hill and into the care of waiting paramedics.

The casualty was treated at the scene for his injuries and then taken to hospital by ambulance for further treatment.

A spokeswoman for South West Ambulance Service said: “We took the call at 10.03pm. We arrived and treated a man for head, neck and back injuries.

“He was taken to Dorset County Hospital for further treatment. His condition was stable.”