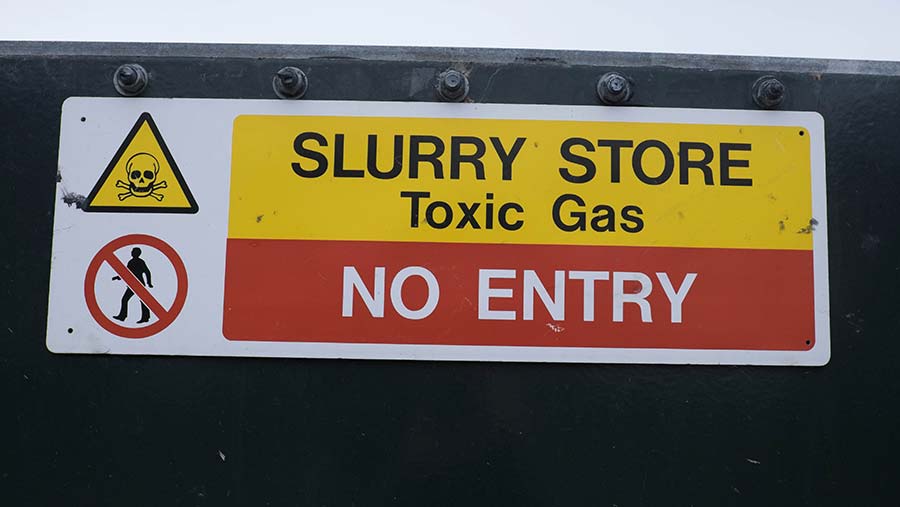 Farmers are being warned by the Health and Safety Executive for Northern Ireland (HSENI) to take extra care when planning the dangerous job of mixing slurry.

At higher concentrations you will rapidly find it harder to breathe and become confused – and at certain concentrations just one breath can kill, says HSENI.

The warning comes ahead of the commencement of the closed period for slurry spreading at midnight on 15 October 2018.

Mixing slurry can be a dangerous job because the gas is released very quickly, and in large quantities, as soon as the mixing starts.

The first 30 minutes are the most dangerous, so it is important to remove all stock from the shed before mixing starts and for farmers to leave the building as soon as the mixing starts.

It is also vitally important to stay out of the shed for at least 30 minutes after the mixing starts.

Malcom Downey, who heads up the farm safety team at HSENI, said: “Do not take any chances when mixing slurry – your life may depend on it. Stop and think about the entire job ahead and ensure you follow the slurry mixing code.

“When mixing slurry, keep children and animals away at all times. Farmers must stay out for 30 minutes after starting mixing or after moving or redirecting the pump.”

For more information about working safely with slurry, contact the HSENI helpline on 0800 0320 121 or visit the HSENI website.

Alex Walker, from County Antrim, thought he had picked the perfect, still spring day for mixing slurry, but a big mistake left him in hospital for one night and suffering from severe headaches and fatigue for several weeks.

Returning to the mixer 15 minutes after he had turned on the pump, Mr Walker soon discovered something was wrong.

“My skin felt almost tight, like someone had placed a mask over my face and sucked all the air out of my lungs,” he said.

“I quickly realised I was being gassed.”

Holding his breath, he ran to the tractor, opened the door and pulled the throttle back to cut the revs, before sprinting out of the shed.

“I remember thinking I’m not going to make it, this is it. Then everything went black,” Mr Walker said.

“Looking back, the biggest mistake I made was that there was not a breath of wind that day, and I should not have been mixing slurry.

“On a still day that gas can’t get away and if you’re in there, you’ll not get away either.”

Inspectors will be visiting farms and ensuring farmers are carrying out work at height safely.

Since the beginning of 2018 there has been 21 people killed due to farm accidents across the Republic of Ireland and Northern Ireland.

How to work safely at height:

Inspectors will also highlight the dangers of falling objects, such as round bales and other feed items. It is important that they are properly stacked and handled to avoid them falling and causing crush injuries.