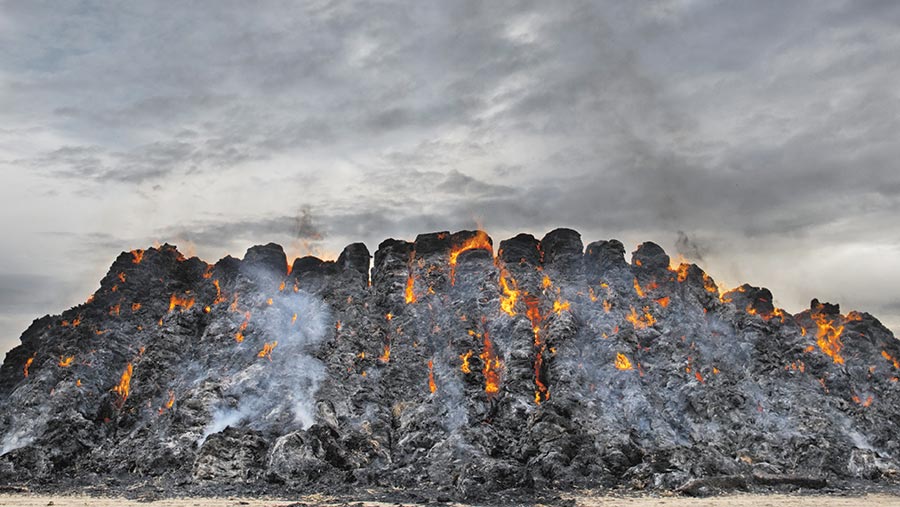 Farmers need to be fully prepared to counter the risk of fire at any time but particularly at certain times of year such as harvest and during festivities such as Bonfire Night.

Early intervention with adequate water supplies is the key to minimising the risk of damage.

In most cases, the emergency services will be quick to arrive on the scene, but as a fire engine carries only 1,800 litres of on-board water, this limit may restrict their ability to deal with a fire, even in its early stages.

As a result, being able to make use of existing on-farm water supplies can be crucial, especially as farm fires tend to be in remote locations away from hydrants.

See also: Planning a livestock evacuation in case of fire

If the fire brigade has the right couplers with them, so that they can connect to the water source, this is straightforward.

However, the vast array of connection systems found on farm equipment means this is not always possible.

It was this situation that prompted Cambridgeshire farmer David White, to investigate what sort of fitting he should have by his water tank, having tried to help put out a farm fire earlier this year.

It was at the start of harvest that Mr White and his contractor, Chris Ascroft, spotted smoke coming from a nearby field of winter wheat.

Both men offered to help – Mr Ascroft in his pickup with some water and a small electric pump, and Mr White with his Bateman sprayer containing 2,000 litres of water.

Three fire engines were already present: two parked on the road soaking the verge and hedge next to an adjoining house, the other parked in the field gateway.

“Having made a good start, the fire engines were starting to run out of water,” Mr White explains. “They had to retreat through the traffic in search of the nearest hydrant, in order to refill.”

The arrival of another neighbouring farmer, Barry Williams, with his 16,000-litre water bowser to supply the engines proved to be a waste of time – the connection systems on the bowser and the fire engines were different.

“That sparked questions and a follow-up meeting about why the brigade did not have the right couplers,” Mr White says.

He has since discovered that a 2in braided connector, costing less than £40, will couple to all fire engines in the country.

Subsequent tests have shown that, attached to a 6,800-litre bowser, such a system is able to supply 28 minutes of uninterrupted water to a fire appliance using two hose reels operating at 30bar.

Mr White has now involved his insurance company, along with the fire service, to spread this knowledge to other farms in the region.

“This is about saving lives and saving property,” he says. “Getting fires under control more quickly is possible if on-site water supplies can be used.”

How to assist fire service

Kevin Turner of the Cambridgeshire Fire and Rescue Service operational support group provides some other pointers for ways that farmers can assist the fire service:

All farms are at risk of fire. But while electrical faults are the main risk factor, their remote location, open boundaries and the storage of combustible materials mean many farms are particularly vulnerable to arson.

According to former firefighter and safety adviser Brad Wilson of Equiprotect, it can take up to 20 minutes for a fire engine to reach a remote location, by which time a great deal of damage can be done.

“A timber-framed structure, such as a stable, takes just three-and-a-half minutes to burn to the ground,” he says. “A straw barn, with densely packed bales, would take longer – but there would be a reasonable fire blazing within five minutes.”

Coming from a rural background, Mr Wilson has spent 12 years in the rural fire service and has seen the devastation fire can cause. He advises all farms to do a fire risk assessment. “If you employ more than five people, this is a legal requirement anyway,” he adds.

There are five parts of a risk assessment:

“I have attended many incidents in my time in the fire service where we have seen loss of livestock,” says Mr Wilson. “All too often, people say ‘I wish we had done something to prevent this happening’, by which time it is too late.”

Rural fires and crime very often go hand in hand, he adds, with criminals setting fires in an attempt to cover their tracks.

Causes of fire and prevention tips