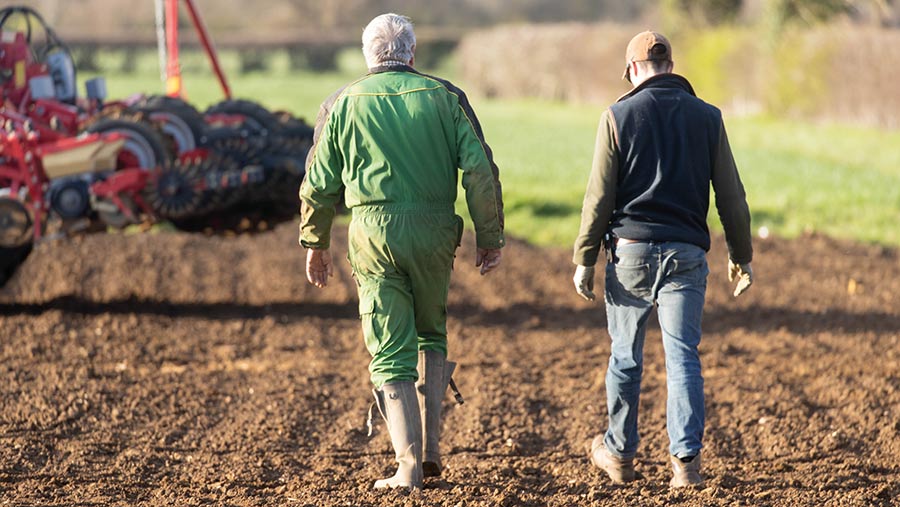 Farmers are notorious for spending more time thinking about their livestock, costs and crops than their own happiness and wellbeing.

This is perhaps best explained by agriculture’s long history, slight reluctance for change, commitment to continuing traditions, and above-average-age and male-dominated workforce.

Alongside these factors are the industry’s high suicide rate and high accidental death rate, and the relatively low priority given to some of the benefits most people take for granted: time off, doctor appointments, socialising.

So how are you really? And how can you improve your own personal wellbeing for the good of yourself, your loved ones, and your business?

The high suicide rate in farming – there were 77 suicides among people working in agriculture and related trades in England and Wales in 2019, according to the Office for National Statistics – represents just the tip of the iceberg, says Matt Lobley, professor of Rural Resource Management at the University of Exeter.

“Lone working, the lack of a close confidant, limited social support networks, can all contribute to feelings of stress, anxiety and depression,” says Prof Lobley.

“We’ve all been talking about this for a year with Covid, but farmers have been experiencing this for years and it’s compounded by issues we still have with gendered notions of farm work and masculine stoicism.”

Farming Community Network (FCN) chief executive Jude McCann says the nature of the calls to the charity’s helpline over the past 12 months has changed in several ways.

“Calls containing a component such as stress and anxiety are among the most common each month,” he says.

“Family disputes and financial concerns are also common, and in some instances these issues are exacerbated by Covid-19.

“Farming can already be an isolated profession, so the lack of shows, markets and other opportunities to interact with other farmers and friends has increased feelings of isolation for some.”

As with other sectors, increasing diversity by bringing in new blood will help shift the culture towards one that is more open to thinking and talking about wellbeing, says Prof Lobley.

“The younger generation is generally much more open to these discussions so I hope in time it will swing the other way,” he says.

“The increase in female farmers will also help, though we must guard against gender stereotyping that women do the nurturing roles on farm.

“We need more male farmers to speak out about their own experiences so that talking about mental wellbeing is just as normal as talking about crop health and livestock.

“Emotional intelligence should become a key part of the toolbox required to manage and work in a successful business.”

“The worst thing we can do is pretend our stress or anxieties don’t exist,” he says. “We’ve all known colleagues who we’ve only realised had problems when it was too late. We need to normalise giving people time and permission to talk about it.”

Choosing the right time, place and language is crucial, especially with the older generation, who may be uncomfortable or impatient with specific, modern terms such as “mental health”.

“I think people are very willing regardless of age, gender and background to talk, but perhaps it’s while leaning on a gate and looking at the cattle or with a coffee around the kitchen table, talking about how much you have missed going to the mart café during lockdown,” says Mr Roberts.

“Not talking about grass growth and the technical side of the business, but really about how you both are. People forget there’s a real question mark at the end of ‘how are you?’ and it’s not just a precursor to saying, ‘I’m great’.”

It can be easier and more usual for the younger generation to start these conversations but such discussions with older farmers can be just as rewarding and often more powerful, he adds.

The weight of expectation of maintaining a holding – particularly for multigenerational family farms – can be very damaging, says Prof Lobley.

Whereas in lots of sectors growing a business, selling it and moving on is a sign of success, in farming it can be seen as a failure.

“We need more examples of people talking about their positive experience of leaving the farm,” he says.

“For some people it is without doubt the best decision they could make for their own wellbeing and quality of life.

“An exit plan should be part of normal business planning – that could be a succession plan or leaving farming to do something else.”

Mr Roberts agrees, adding: “I can wax lyrical about being a farmer but I have met people of my generation who, though successful, don’t actually want to farm and don’t want to be seen as the generation that fails.

“It’s not a failure, it’s a sign of strength. It’s just about how you do it.

“Both me and my father took time away from the farm, tried other things and came back to it, with a different mindset, and I realised I’m never happier than when I’m farming.”

Mark Yearsley has made a success out of his move from managing large-scale dairy herds to becoming a dairy farm consultant.

Though not from a farming background, he fell in love with dairy cows while working on a unit at age 15 and struck out on that career path, becoming farm manager at Reaseheath College in 2007.

“The main reason was my body was starting to break down, with past injuries catching up with me,” says Mr Yearsley. 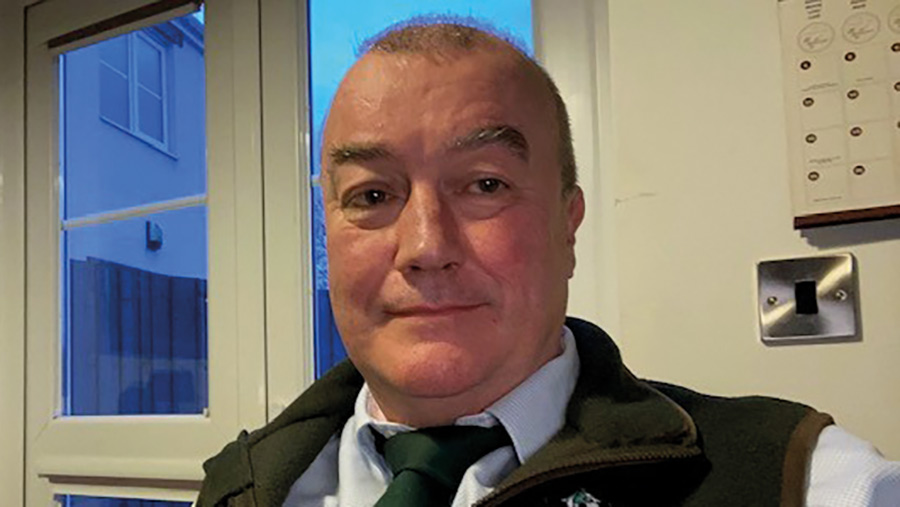 “I had also been under a lot of pressure and stress in the past from bosses.”

Keen to share his experience with farmers, Mr Yearsley took on a role in Dorset as part of The Farm Consultancy Group in 2019.

He has also experienced first-hand the devastating effects of the stifled conversation around mental wellbeing, having lost two close friends to suicide in the 1990s.

“I hit it off with a dairy parlour rep when I was managing a farm in North Yorkshire,” he says.

“We used to talk once a week and one day he asked if he could see me and we met up and chatted about the past and the future and where we were going.

“The next day I had a phone call from one of his colleagues to say he’d gone home and killed himself.

“I felt guilty because I’d been with him the night before and I’d had no idea. It’s something you never think about unless he says something to you.

“I had met his wife and three young girls and I thought, he’s left them really in the lurch.”

Another friend, who had done the same job in North Yorkshire as Mr Yearsley, also took his own life, leaving behind a wife and teenage daughter.

“I know farming’s lonely, you work long hours, it’s unsociable, and so I can relate to why they did it in certain ways,” he says.

“But they were the same age as me at the time, about 33, 34, and that’s very young. If someone’s unhappy with their job, there’s always a new door that will open. If work’s getting you down, your mental and physical health is more important than anything, so look at change.

“There are organisations out there that can help. Don’t be afraid to pick up the phone.”

One option for anyone wishing to leave farming but not sell a holding is to consider a joint venture, which also provides a great opportunity for a new entrant or young farmer to get involved, says Mr Yearsley.

“With a lot of family farms there’s a rift between generations and I think it’s usually the younger generation that feels the brunt of it. Move away if you need to but don’t break your ties with your family.”

Mr Yearsley’s team are being trained to look out for their clients both professionally and personally, and he also plans to volunteer for FCN, to learn as much as he can and offer his support.

“When our mental health is poor, we can be more susceptible to physical illness as well as having accidents on the farm or making impulsive decisions,” he says.

“We need to do what we can to view health as a complete picture that incorporates our personal wellbeing as well.”

Mr Roberts says farmers don’t take their physical health seriously, believing being in pain is just part of the job, and celebrating never going to the doctor.

Having already taken on his own impressive health journey – losing 10 stone and completing the London Marathon in 2017 – it’s a subject of personal connection.

“I was 28 stone, a heart attack in the waiting, and I dread to think how many years it would have taken off my life,” he says.

“I did get lazy but I’m now remembering how good running is, both the exercise and the short break it gives me from the farm.

“We need to get off farm and get out of our village, whether it’s just for short periods of running or for a holiday.”

Health and safety also remains an area that needs huge improvement – more than 50 people died in farm-related accidents during the past year, almost twice as many as during the previous 12 months.

“We’re still turning a blind eye when we’re seeing people doing the wrong thing and we have just got to work on this,” says Mr Roberts.

“We’ve come a staggeringly long way as an industry but we have to admit when we need help, and going forward I hope this is something we can improve as a sector.”

Jim Hume, convenor of Scottish mental health charity Rural Wellbeing: There are signs to look out for. These can include changes in someone’s behaviour – perhaps they are not as talkative as before, grumpy, quiet, angry, introverted, not socialising or answering calls.

If you suspect someone is struggling, approach them and ask if they are OK. If you are not positive that they gave an honest answer, persevere and ask them again. You will not make the situation worse.

Listen, understand, empathise – be there for that person.

Jude McCann, Farming Community Network chief executive: The most important thing you can give someone is your time. Let’s normalise it and ask people how they really are.

There is no shame in asking for help, and rarely will you be in a situation that nobody else has been in, even if it can feel like that is the case at the time. Speaking to others about what challenges you may be facing, whether that’s FCN or a friend, neighbour or fellow farmer, can make a real difference and can help take some of the pressure off.

Stuart Roberts, NFU deputy president: Don’t forget the question mark at the end of ‘how are you?’ Ask the question twice and give people permission to show how they really feel, then just listen to them. We have one mouth and two ears – we should remember to use them in that proportion.

NFU Mutual: Consider business protection term assurance (with optional critical illness) – this can provide financial protection to your business by paying out a lump sum when a key employee is diagnosed with a terminal illness or dies.

You decide how much financial protection the business needs to cover a period of staff transition, known as the sum assured. This could be a multiple of an individual’s salary or a percentage of their contribution to the business’s profits.

Where to find help