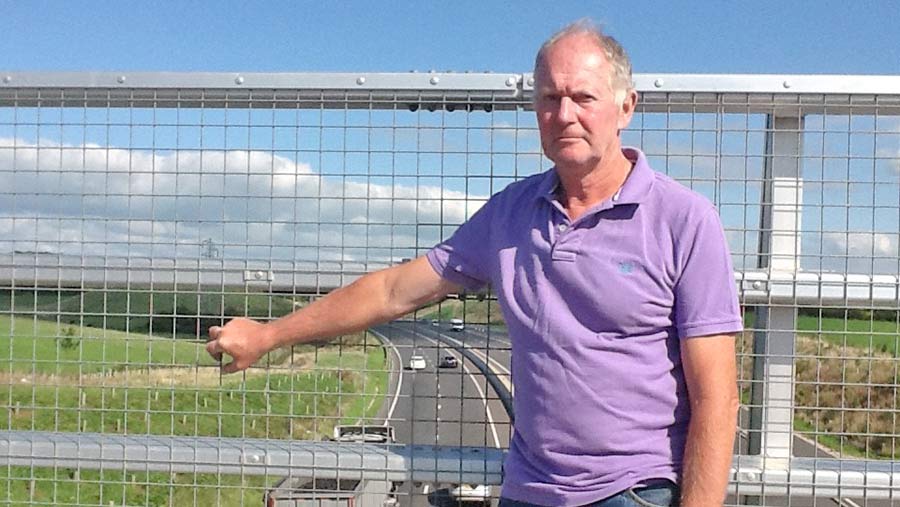 A Lancashire farmer has been forced to sell his dairy herd during a compulsory purchase battle that has left him out of pocket for four years.

Paul Casson farms in Lancashire and had 32 acres compulsory purchased by Lancashire County Council in January 2014 to build a new motorway link road.

The road, which opened in late 2016, split his farm in two and livestock farmer Mr Casson called the authority’s initial land valuation “derisory”.

“Their value was about 60% of the market price, and you only get 90% of that estimate, so I was essentially offered 50% of its market value,” he explained.

“For three-and-a-half years I had no access to one half of the farm and I had to sell my dairy cows, because it was impossible to milk them.

“The majority of the money is still outstanding and no interest will be paid.

“It’s business ruination. The county council are using me and the other farmers along the route to bankroll the scheme.”

Mr Casson has contacted his MP David Morris about his experience and called for a change in compulsory purchase legislation but has received no response.

He now fears that the frustration and stress of the process could continue for several more years as he waits for the final payments to be made.

The plans include a new East-West Rail line connecting Oxford and Cambridge by 2030 and the accelerated development of the Oxford to Cambridge Expressway.

The goal is to deliver one million new homes in the corridor by 2050, with the development of up to five new towns or villages.

The expressway is a proposed dual carriageway between the A34 near Oxford and the A14 near Cambridge, going via (or near) Milton Keynes.

Early estimates of the cost of creating the expressway are in the region of £3bn.

The scheme has received criticism for its lack of public consultation.

“Developers are showing interest in the ‘arc’, and potentially land prices will rise as a result, making it more difficult for those dispossessed to acquire more land,” says Edward Briggs, director of land and property consultants Briggs and Stone.

The route between Oxford, Bedford, Milton Keynes and Aylesbury is being created in three phases. The first phase, linking Oxford and Bicester, is already complete.

The plans for the second phase, between Bicester and Bedford, have been submitted to the Secretary of State for Transport and propose major track and signalling upgrades, and the reinstatement of an abandoned track between Bletchley and Claydon Junction.

If permission is granted, major works could begin in 2019, with services operational in the early 2020s.

The government’s target for completion of the whole line from Oxford to Cambridge is during the mid-2020s, delivering an estimated journey time between the two cities of 73 minutes (down from 2.5 hours).

The Cambridge-Oxford rail link and the expressway will impact severely on landowners along the route with many losing land and having their units severed while at the same time trying to run their businesses among all the uncertainty and disruption.

The A303 past Stonehenge is part of the most direct route between the south-east and the south-west, and average traffic flows along the single carriageway section between Amesbury and Berwick Down reach twice its design capacity.

The road runs just 165 metres from the ancient stone circle, and cuts the village of Winterbourne Stoke in two.

To improve this route a dual-carriageway (running through a tunnel near Stonehenge) is planned.

The planning application is due to be submitted in late 2018, with a view to start working onsite in 2021 with a £2bn budget.